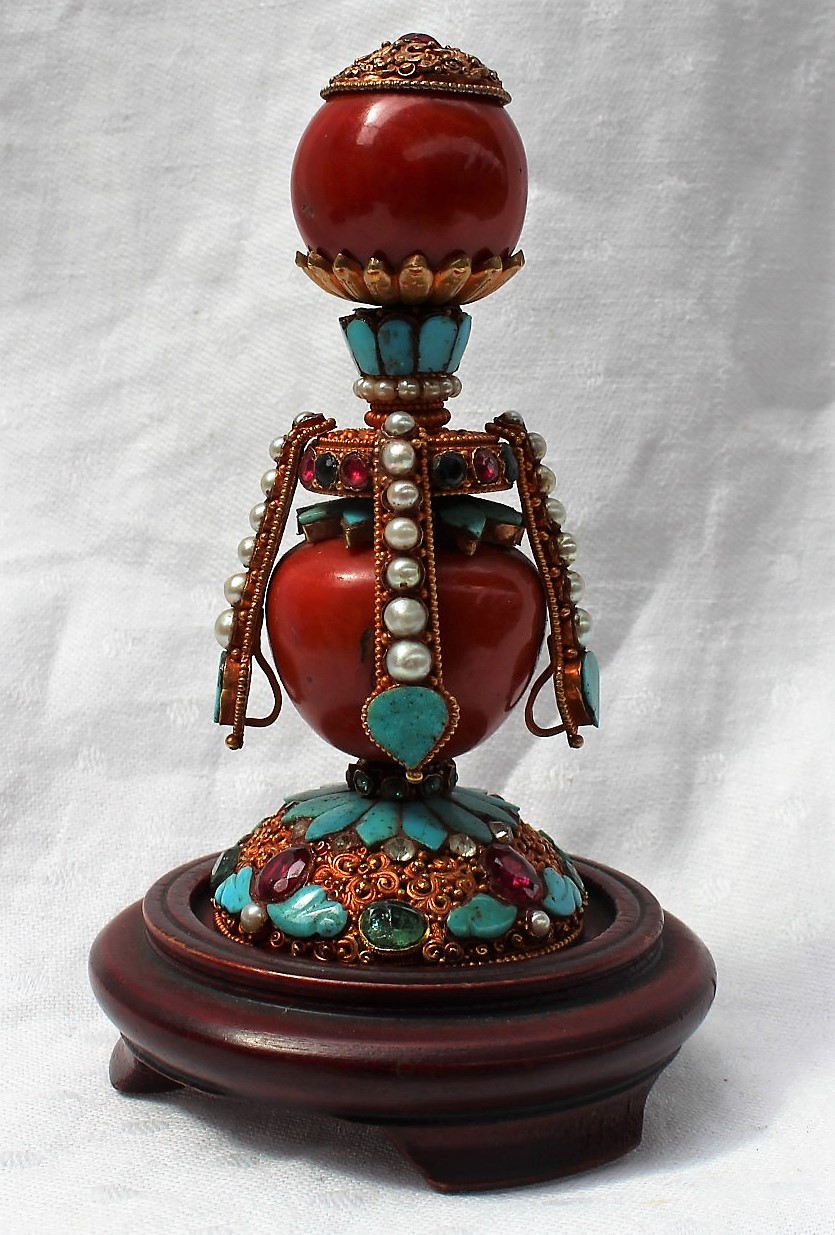 A rare and tiny Tibetan hat spike featuring precious stones is set to sell for between £10,000-£15,000 when it comes up for sale in Cardiff later this month.

The hat finial, which measures just 4-inches high, is believed to date to the 18th century and would originally have been worn as ornamentation and to denote rank on the hat of a Tibetan government minister. It is fashioned from a central interior column in silver with fine goldsmiths work from Lhasa forming the exterior structure. 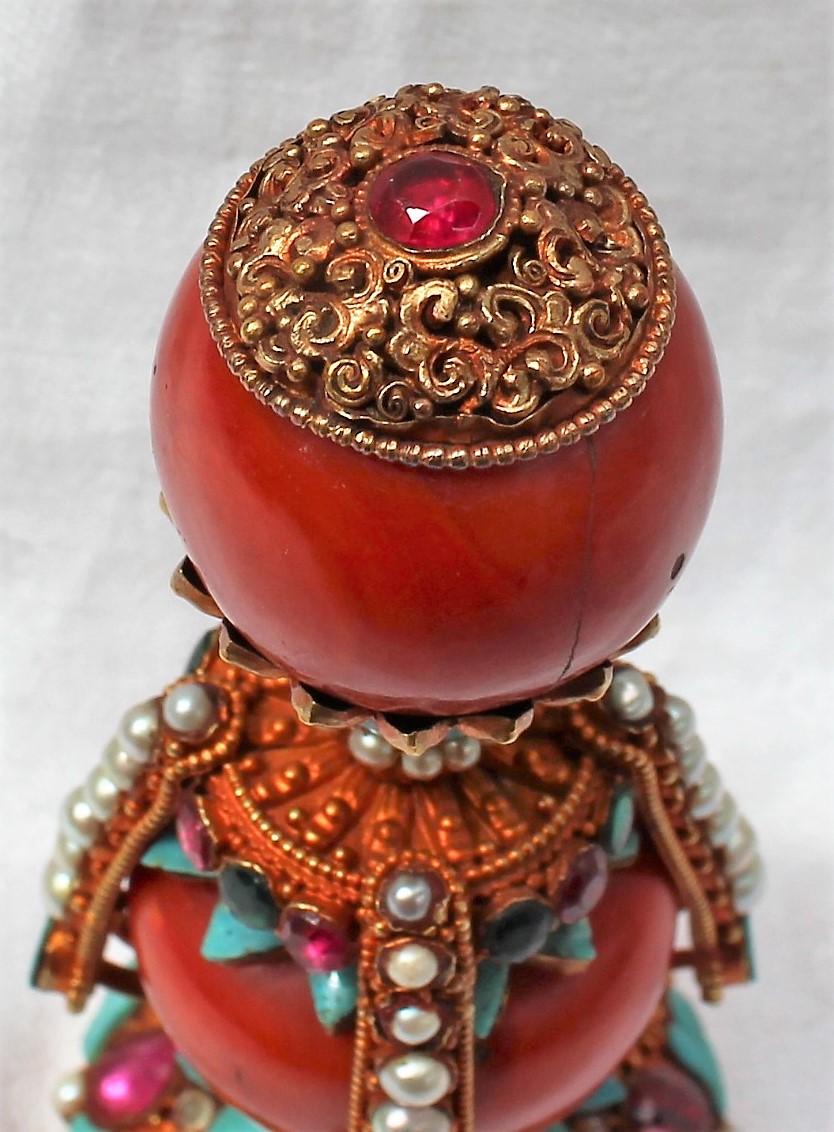 Jewellery forms an extremely important part of Tibetan culture, and unlike the rest of the world, rather than being worn for purely aesthetic purposes, Tibetans believe that jewellery can serve as an amulet of protection and an auspicious symbol of good luck; it has also historically been used in Tibetan society as an indicator of social status.

For men, jewellery and ornaments were statements of their position in society. Officials in government were required to wear them as indicators of rank, with items worn depending on which of the eight levels of government officialdom had been reached.

One of the most visible insignia of office was the thin pencil-shaped earring and the stone-set, gold hat finial called shalok. The headwear of officials during the Qing dynasty (1644-1912), called Qing Guanmao, consisted of a black velvet cap in winter, and a hat woven in rattan or similar materials in summer, both with a button or knob on top; the button or knob would be changed to a finial during formal court ceremonies held by the Emperor. The particular stone worn on the top of a hat or hat finial 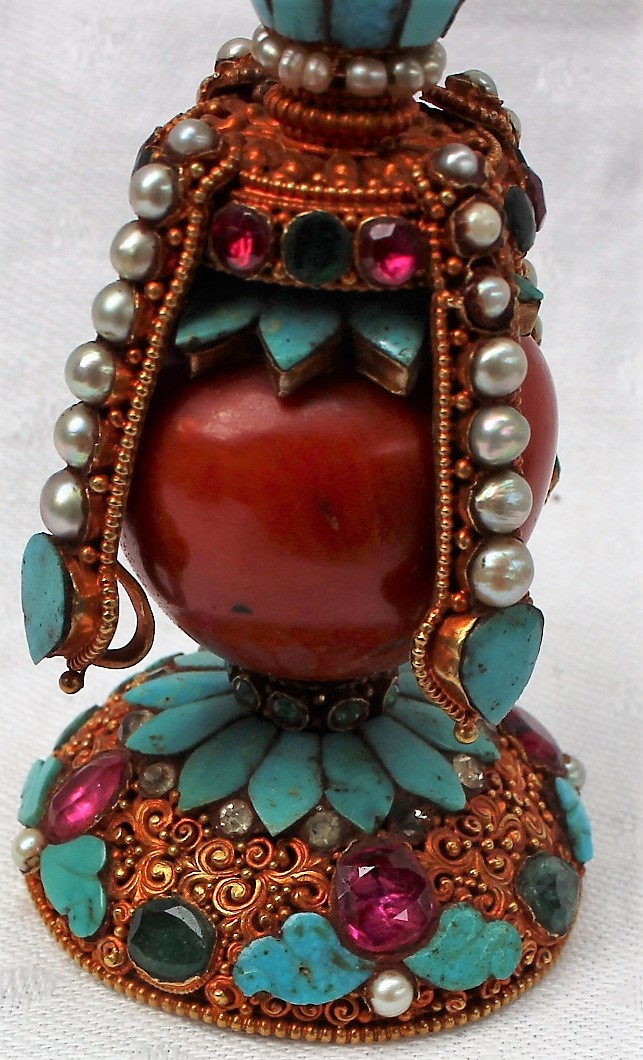 showed the wearer’s rank. The Prime Minister, a first-rank official, wore a pearl at the top of his finial, the four cabinet ministers, of second rank, wore rubies while officials of the third rank, who were the heads of government departments, wore coral hat ornaments.

The hat finial to be sold at Anthemion Auctions is made of coral, and is adorned by a ruby on top, sixty-two pearls, which cascade down its sides, nineteen emeralds and forty-four pieces of turquoise. Folded inside the base plate is the list of cautions and responsibilities incumbent with office, in Tibetan and Manchu scripts.

In the Tibetan ritual tradition of the last millennium, coral is classed among the five precious substances (rin-chen sna-lnga), which also include silver, gold, turquoise and pearl. The colour red is one of the five auspicious colours associated with buddhism, symbolizing life force, preservation, the sacred, blood and fire. It is frequently used to paint sacred buildings, and particularly in relation to coral , is believed to be protective, bringing its wearer success in life. Turquoise is a highly sacred and important gem to Tibetans, being a precious signifier of personal happiness, social affiliation, and the divine presence. It is written that, as a sacred material, turquoise was used to produce the armor, helmets, and weapons of various deities and epic heroes.

The finial will be auctioned at Anthemion Auctions in Cardiff on the 24 May.