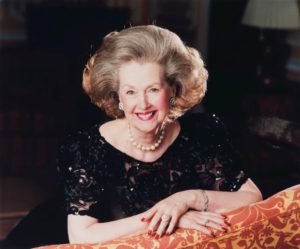 The collection of Raine, Countess Spencer, daughter of celebrated romantic novelist Dame Barbara Cartland and step-mother to Diana, Princess of Wales, is to go under the hammer at Christie’s next month.

Items within the auction include works of Old Master paintings, fine furniture, Asian art and clocks.

Lady Spencer enjoyed a position at the centre of London society for over 60 years, having been named Deb of the Year in 1947. She had an appreciation of the fine and decorative arts; 18th century France was of special interest, and she assembled a collection of paintings by some of the greatest artists of that period, including Boucher, Fragonard and Vernet.

Lady Spencer also collected fine furniture on which she displayed ormolu clocks, objets d’art and Chinese works of art – including intricately carved jades; the Art Deco was also a period of particular inspiration. Highlights from Lady Spencer’s important collection of French 18th century Old Master paintings will be offered for sale at Christie’s King Street on 6 July as part of the Old Masters Evening Sale, followed by a dedicated collection sale on 13 July: The Collection of Raine, Countess Spencer.

The sale will offer a glimpse of the interiors of Lady Spencer’s London house and will feature furniture, Old Master paintings, objets d’art and jades as well as a selection of couture, jewellery and accessories from her personal wardrobe.

The only child of Alexander McCorquodale and the novelist Dame Barbara Cartland, Lady Spencer was a politician and a socialite. In 1954, at the age of 23, she became the youngest member ever to be elected to Westminster City Council. She subsequently played an instrumental role in the saving of historic buildings, most notably as Chair of the Covent Garden Development Committee and as Chairman of the Greater London Council’s Historic Buildings Board.

Lady Spencer had a long and fruitful association with Harrods, and took her job very seriously, until the very end of her life combining her work at Harrods Real Estate with a Saturday shift at the men’s shirts department in Knightsbridge. She also made frequent visits to the airport shops, even on Christmas Day.

The auctions this July offer a unique opportunity to view Lady Spencer’s private world, and to acquire works of art collected over the years by one of the most colourful social figures of the twentieth century.

Highlights from Lady Spencer’s collection of French 18th century Old Master paintings will be offered in the Old Masters Evening Sale on July 6. Leading this group is a scene by Claude Joseph Vernet of A Mediterranean sea-port with fishermen unloading cargo (estimate: £300,000-500,000, right). A further highlight is Jean-Honoré Fragonard’s bozzetto, The goddess Aurora triumphs over night, announcing Apollo in his chariot, while Morpheus sleeps (estimate: £150,000-200,000). Further Old Master paintings will feature in the dedicated collection sale on 13 July such as Jan Abrahamsz Beerstraaten’s View of the Munttoren on the frozen Anstel, Amsterdam, with figures skating (estimate: £40,000-60,000).