Antiques expert Mark Littler came across a rare gun during a recent talk and valuation day at a PROBUS club in Tattenshall, Cheshire, and it now looks set to sell for thousands in an arms and armour sale later this month. 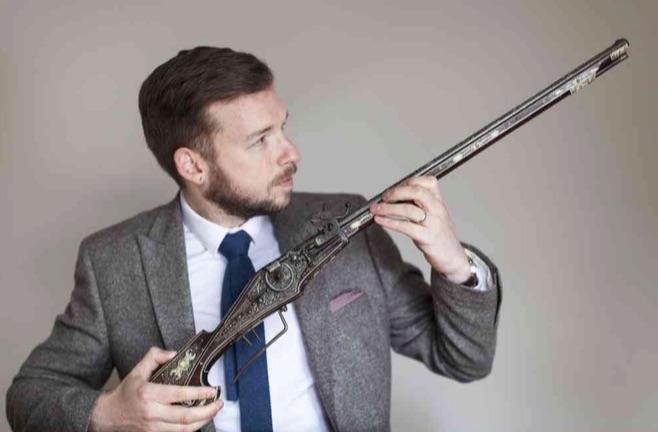 Mark explains, “One of the gentlemen presented me with a gun and I immediately thought ‘this is a great thing’. Being a general valuer, I recognised the expert craftsmanship with the decoration to the stock and barrel, there was no doubt that this was a superb item.”

After discussing with the owner and telling him that it was likely to be more valuable than the family assumed, the owner consigned the gun to Mark for further research. Mark called upon London-based specialist arms & armour auctioneer Thomas Del Mar for his input, and eventually recommended to his client that such a rare gun should be sold with the auctioneer.

Thomas confirmed that Mark’s research was correct and that items was a fine 60 bore German wheel-lock carbine, which had been made in Suhl/Thuringia in the late 16th century. An outstanding piece due to its beautiful art work, it is now set to be included in Thomas Del Mar’s next auction of Arms & Armour on June 28 with an estimate of £8,000-10,000.

The gun has been in the Davies-Colley family of the Newbold Estate, Bruera near Chester, since around 1890. Yet, how the family came to own the carbine is no longer known, but interestingly a pair of pistols with a similar treatment of the barrel and with the same mark as the present carbine and also with a double eagle on the lock, were formerly in the Saxon Royal Collections, Dresden and sold at Sotheby’s in London in March 1970.

Another pistol decorated in this manner was sold by Thomas Del Mar at Sotheby’s Olympia in June 2003. The leafy tendrils on the barrel and lock are characteristic of Suhl firearms of this period, a number of which have stocks carved en suite. Similar ones are preserved in the former Saxon Electoral Armoury, now the Staatliche Kunstsammlungen, Dresden.

The 63.5 cm barrel shows five allegorical figures, probably depicting the liberal arts and also exotic birds, a hound and a rabbit. Other engravings found on the gun depict a dog formed as a marine monster, an owl and a rabbit, a devils mask, flowers and fruit. Struck with the maker’s mark (Neue Støckel 2767) over the breech, engraved tang signed ‘HW’ and stamped with the maker’s mark en suite with the barrel, it is fitted with a raised wheel-cover, which is decorated with the double eagle displayed of the Empire.