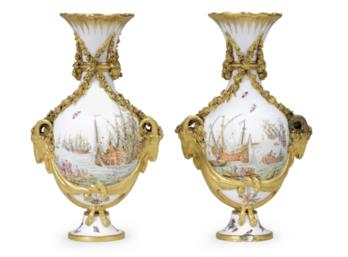 A rare pair of late 18th-century Sèvres hard-paste vases, made for a member of the Court of Louis XVI at Versailles, more than doubled their lower estimate of £70,000 to £90,000 when they sold for £149,000 in Bonhams’ Fine European Ceramics sale this week.

Only 13 vases of this style were ever made by the Sèvres porcelain factory. They were manufactured to order between 1778 and 1779, and buyers included the King himself, and his aunt, Madame Victoire. It is believed that the pair of vases in the Bonhams sale was bought by the king and presented to his sister in law, the Comtesse d’Artois.

The vases were decorated by the prominent gilder, Jean-Jacques Dieu, whose name appears in the archives of the Sèvres porcelain manufactory between 1777 and 1811. They are richly decorated with chinoiserie sea battles – one ship on each vase bears a shield with the French royal arms – and have goats head handles.

Just over ten years after the vases were delivered to Versailles, the French Revolution broke out in 1789 and many of the aristocracy, including the Comtesse d’Artois, fled. The pair in the Bonhams sale next appear in England in the collection of diplomat William Poyntz, though how he acquired them is not known. They passed by inheritance to Poyntz’s daughter Georgina who, in 1755, had married John Spencer, later First Earl Spencer, the family of Princess Diana.

Bonhams Head of European Ceramics Nette Megens, said, “These vases are exceptionally rare and with a wonderful provenance, having been in distinguished English collections for most of their existence. Their close connection with the doomed court of Louis XVI make them even more intriguing and attractive.”