Theories on quantum mechanics, his fame and getting old are just a few of the subjects discussed by Albert Einstein in a collection of letters to his closest friend, Michele Besso, which will star in Christie’s Classic Week dedicated online sale next month.

Einstein: Letters to a friend, will present 50 lots from Einstein to Besso, with a further six letters offered in the Valuable Printed Books and Manuscripts sale on 12 July. The collection provides a rare insight into the life and personal thoughts of one of the world’s most celebrated scientists. Estimates range from $1,000 in the online sale to £150,000 in the live auction, and selected lots will be on view to the public at Christie’s London from 8 to 12 July.

Einstein and Besso first met as students in Zurich in the late 1890s, and their friendship was cemented during their time working together in the early 1900s in the Swiss federal patent office in Bern. 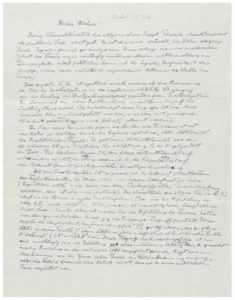 When Einstein changed the world of physics in 1905 with four ground-breaking papers, Michele Besso was his only acknowledged collaborator. Einstein’s letters to Besso discuss freely and in detail the key scientific concepts of his career including: special and general relativity, the ‘cosmological constant’, the red shift of spectral lines, ‘time’s arrow’, unified field theory and quantum mechanics.

Alongside this, there is the human side of Einstein: walking in the mountains with his young son, the breakdown of his first marriage and his humour in discussing colleagues, the League of Nations, fame and getting old. Above all, there is his delight in his work, his relish for a new theory and sense of elevation when grasping at fundamental truths, which he expresses in one letter as ‘getting closer to God’.

Michele Besso died in March 1955, and the very last letter in the correspondence is written to members of Besso’s family a few days later, shortly before Einstein’s own death at the age of 76. The letter ends with a famous sentence which brings together their friendship and the scientific understanding they shared: ‘Now he has again preceded me a little in parting from this strange world. This has no importance. For people like us who believe in physics, the separation between past, present and future has only the importance of an admittedly tenacious illusion’.