Ceramics by such sought-after luminaries as Lucie Rie and Bernard Leach are currently highly collectable, so a sale of contemporary British pottery amassed over 60 years by an enthusiast looks set to attract lots of attention for Cheshire auctioneers, Peter Wilson.

About the Ken Jones Collection

Ken Jones (1930-2011) was born in Tylorstown in the Rhondda valley and studied at Cardiff College of Art, where Head of Art, the renowned artist Ceri Richards CBE, taught him painting and drawing, while his pottery teacher was the influential Frank Vining. After graduating, Ken began teaching at Brynmawr Comprehensive School in Ebbw Vale, and as a lover of making things, his attention soon turned to art pottery, which he embraced with enthusiasm.

Ken Jones was a founder member of South Wales Potters (SWP) with Vining as honorary vice president and became their first exhibitions officer. He organised the first SWP exhibition in London and was also instrumental in gaining acceptance of the society’s separate identity representing Wales by the International Academy of Ceramics in Geneva for its worldwide exhibition in Istanbul.

Today, South Wales Potters is one of the largest groups of professional and hobby potters and ceramicists in the UK.

Ken’s ability to inspire others led to him securing a lectureship with the West Midlands College of Education and he and his family moved to Walsall in 1968. He was subsequently appointed head of the art department and remained there until his retirement.

During his time there he trained many young teachers, inspiring them by inviting artists and potters to give demonstrations during his lectures. His love of the subject also rubbed off on his son, David, who in 1986 with the aid of a grant the Princes Youth Business Trust, founded Walsall Studio Ceramics, an internationally renowned ceramics studio, which produces finely-crafted bespoke pots for bonsai growers. Ken was a familiar sight helping out there in his retirement, passing on his knowledge and enthusiasm.

Appropriately it is bonsai pots by Lucie Rie (1902-1995) and Bernard Leach (1887-1979) that will be among the most wanted pieces from Ken’s collection. Ken purchased the former, with its glazed black border on four block feet, which is estimated at £2,000-3,000, from a London auction house in 1995. The latter dates from about 1950 and is decorated with wavy incisions on a mottled grey glazed ground and is accompanied by its original invoice dated 1990 from Gallery Besson in London. This time it is estimated at £1,200-1,800.

Other pots in collection

Although a potter himself, fellow collectors will need to look hard for Ken Jones’ impressed or incised ‘KJ’ maker’s mark in the lots on offer but there are a couple. Instead, the collection comprises pots Ken purchased directly from makers he admired most, either after meeting them in their studios or at galleries and exhibitions.

Some came from the International Ceramics Festivals in Aberystwyth, which he attended regularly, while others were from potters who were his friends or whom he invited to give demonstrations during visiting lectures.

Several others were serendipitous finds in charity shops where his knowledge and understanding of the skills needed to produce them paid dividends. However, if he confirmed subsequently that a purchase from the latter was valuable, he would return and give more money to the charity.

The collection features a number of works by the distinguished Lincolnshire potter John Maltby (b. 1936), pick of which is a striking slab-sided vase with abstract decoration that is estimated at £500-1,000, but elsewhere there are pots with estimates starting at £50.

In contrast, the two-day sale includes pieces of 18th century English pottery from three private collections, notably early delft from London, Liverpool and Bristol. Most valuable is a charger from the latter, painted with colourful tulips. It is estimated at £800-1,200.

A pair of Delft cornucopia wall pockets, made probably in Liverpool in about 1760 painted in Fazackerly colours and moulded with a bird perched on a flowering branches, is estimated at  £500-800, while also from Liverpool, but a 19th-century product of the Herculaneum factory, is a stoneware bust of Admiral Duncan, the base moulded with cannon. It dates from around 1800 and is estimated at £600-800.

Adam Lord Duncan, 1st Viscount Duncan (1731-1804) defeated the Dutch fleet off Camperdown during the Seven Years War. The victory was considered one of the most significant actions in naval history. 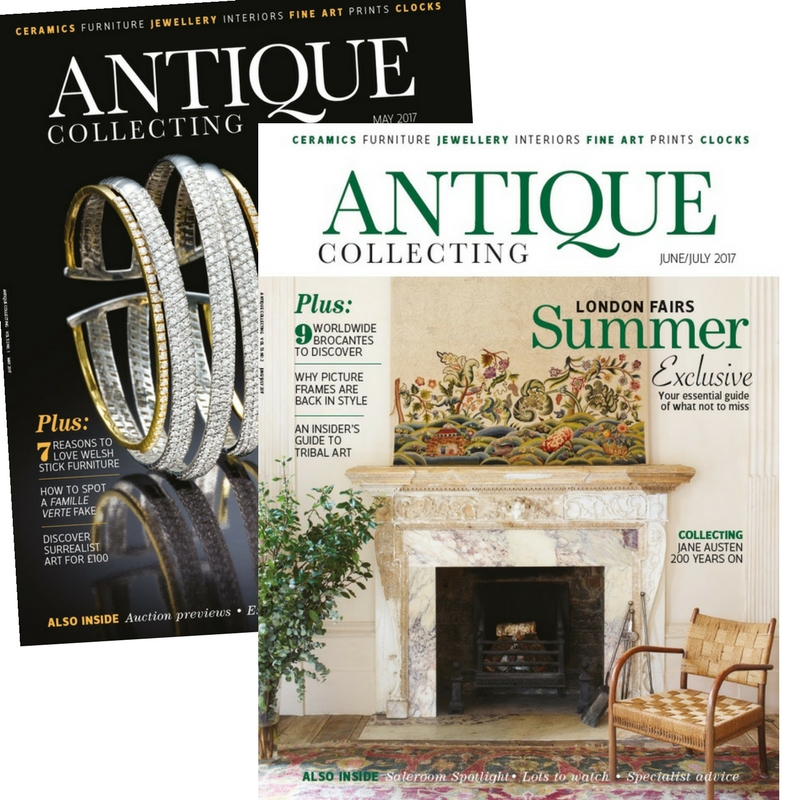