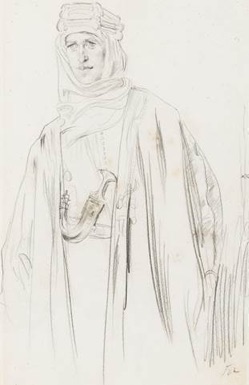 A landmark collection of items relating to TE Lawrence, or Lawrence of Arabia, will be on display to celebrate the centenary of the Battle of Aqaba on July 6.

The exhibition will be staged by antiquarian booksellers, Maggs Bros, one of a series to mark their move to their new London address, 48 Bedford Square, Bloomsbury.

Entitled To Aqaba, the exhibition will feature previously unseen items from all periods of Lawrence’s life. Highlights include a pencil portrait of Lawrence by the Welsh artist Augustus John, executed at the Paris Peace Conference in 1919; the (allegedly bloodstained) map Lawrence carried with him on his pioneer trip through the Middle East in 1909; a unique proof copy of Seven Pillars of Wisdom, with Lawrence’s inscription; and letters by Winston Churchill following his address at Lawrence’s funeral.

The Battle of Aqaba was fought for the Red Sea port of Aqaba on July 6 1917. The attacking forces of the Arab Revolt, led by Auda ibu Tayi and advised by T. E. Lawrence, were victorious over the Ottoman defenders.