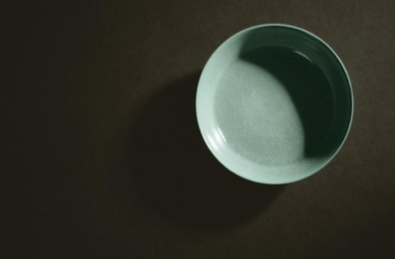 Sotheby’s Hong Kong Chinese Works of Art autumn sale will be led by a highly important and extremely rare Ru guanyao brush washer from the Le Cong Tant collection. The piece dates back to the Northern Song Dynasty (corresponding to 1192), and is one of only four known heirloom Ru wares in private hands. It is expected to fetch in excess of £10 million.

Other major highlights in the sale include an exceptional Xuande-marked porcelain jar painted in rich tones of cobalt-blue with a pair of makaras, which was part of the 1968 Oriental Ceramics Society Exhibition. Elsewhere, an extremely fine and rare blue and white ‘bajixiang’ bowl has not been seen in the market for thirty years, alongside an important documentary Tibetan gilt-inscribed jade river pebble ‘kapala’ box, which marked the occasion in 1783 when the Eighth Dalai Lama was presented with an imperial jade edict by the Qianlong Emperor.

A total of six sales this season offer more than 230 lots estimated in excess of £60 million.

Nicolas Chow, Deputy Chairman, Sotheby’s Asia, International Head and Chairman, Chinese Works of Art, states, “This October we are proud to present several extraordinary collections of Chinese art encompassing understated ceramics from the Song dynasty, refined objects for the scholar’s studio, and porcelain and works of art destined for the palaces of the Ming and Qing emperors. There will be a unique opportunity to acquire a near perfect and ravishing small brush washer from the Northern Song dynasty Ru kilns, the most celebrated and forged ceramic type throughout Chinese history. It is the finest example extant among all four heirloom pieces in private hands.” 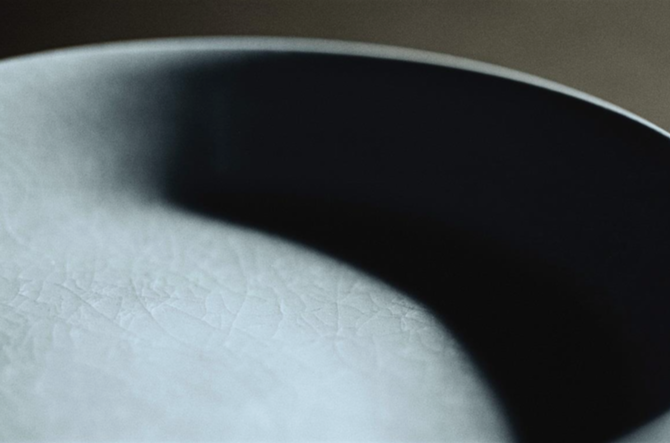 Ru guanyao, the court ware of the late Northern Song (960-1127), was commissioned by the imperial court and is the most revered of the Five Great Kilns. Its quasi mythical status over the millennium can be attributed to its short-lived production period, generally believed to not have exceeded twenty years.

With its glowing, intense blue-green glaze, its luminous, complex interlaced ‘ice crackle’ pattern, its classic, excellently proportioned shape, and its three fine ‘sesame seed’ spur marks, the present brush washer, formerly in the collection of the Chang Foundation in the Hongxi Museum, Taipei, is a pre-eminent example of Ru guanyao and incarnates to perfection the ware’s revered qualities. While seemingly small and unobtrusive, these understated aesthetics reflect the calibre and meticulousness of its craftsmanship, a quiet metaphor of Chinese philosophy celebrated by erudite connoisseurs and scholars throughout time. The present washer is one of only four known heirloom Ru wares in private hands. 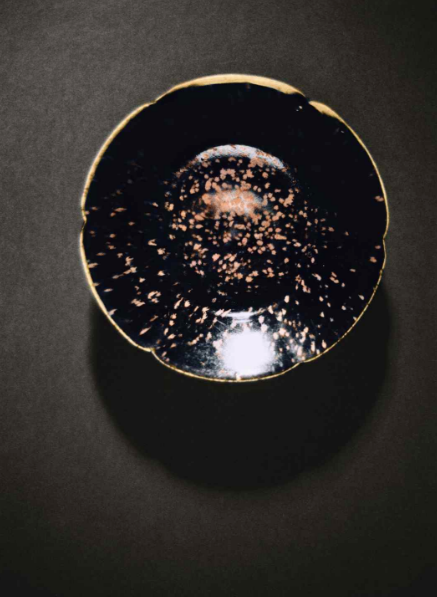 Also categorised under the Five Great Kilns, Ding ware was produced up until the mid-14th century, with the Northern Song dynasty marking their finest period in Chinese history. This stunning black Ding dish boasts a surface splashed with brown speckles and a noteworthy provenance from the Mr and Mrs Alfred Clark collection.

A natural jade pebble skilfully worked into a box and cover of ritual ‘kapala’ form, and intricately inscribed in gilt in Tibetan text, is an object of superlative historical importance. It was bestowed by the Qianlong Emperor to the Eighth Dalai Lama of Tibet at the peak of China’s golden age, at the height of its wealth and territorial power, together with a jade seal and set of jade album leaves. The album leaves, comprising a certificate of appointment inscribed in Han, Tibetan, Manchu and 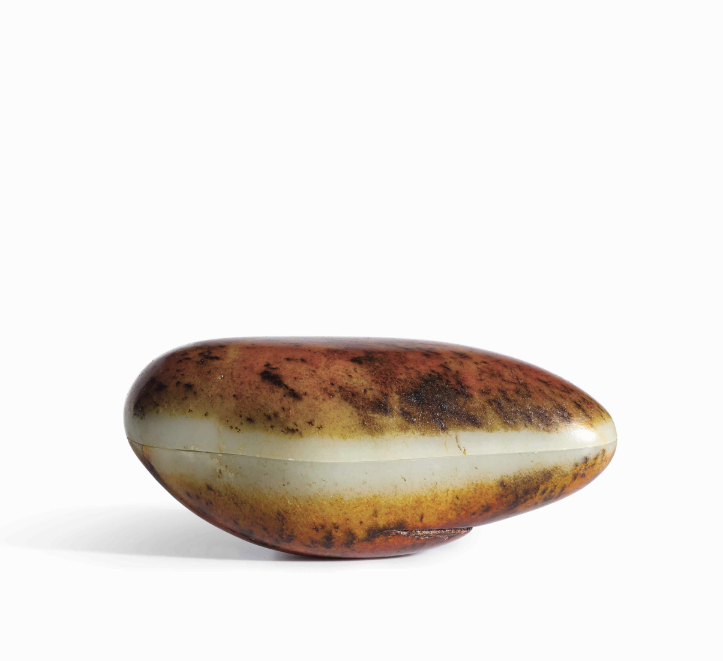 Mongolian with precisely the same inscription as on the current lot, are recorded as having been conferred in 1783. Originally in the collection of the Potala Palace, the seal and album leaves are now preserved in the Tibet Museum, Lhasa. All three jade artefacts were recorded in the biography of the Eighth Dalai Lama, written in Tibetan by the tutor of the Ninth Dalai Lama and regent of Tibet, where the current lot is described as a ‘a golden decree having the outward appearance of a precious gem’. 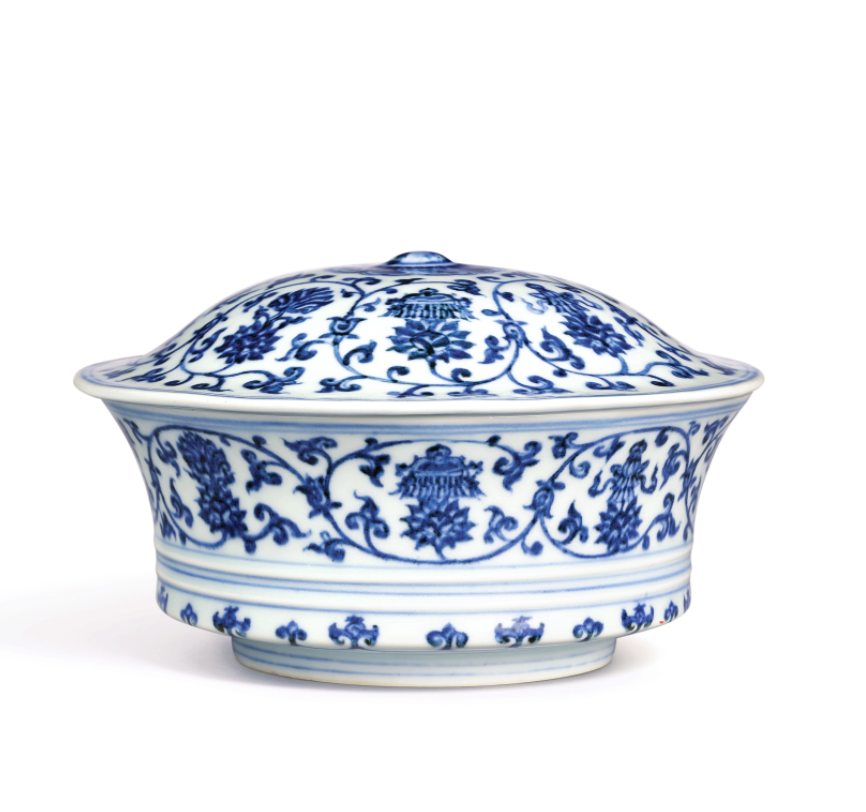 This outstanding Xuande covered bowl, superbly painted in vivid cobalt blue with the Buddhist emblems bajixiang and lotus blooms, was formerly in two of the most remarkable collections of Chinese ceramics, those of Edward T. Chow (1910-1980) and T.Y. Chao (1912-1999). Only one other example of this form with a cover, but decorated with a different motif, is preserved in private hands. Following the successful sale of the exceptional Xuande barbed bowl last season, the reappearance of this bajixiang covered bowl on the market after thirty years is a moment of celebration.

Masterpieces from the collection of an English lady 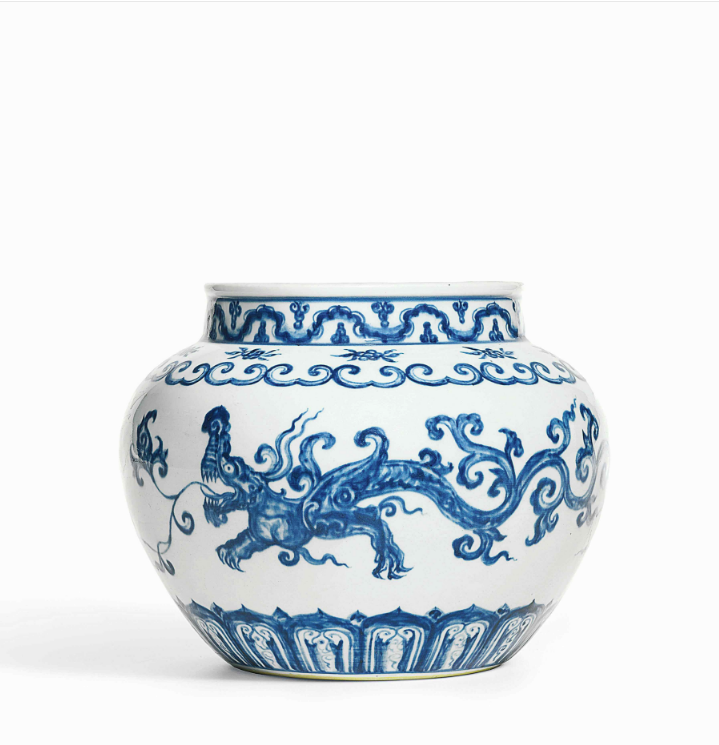 The sale also consists of three outstanding masterpieces of Chinese art from the Ming and Qing dynasties acquired from the 60s to 80s, all with extensive provenance: an exceptional Xuande-marked porcelain jar painted in rich tones of cobalt-blue with a pair of makaras, included in the 1968 Oriental Ceramics Society exhibition, a magnificent Yongzheng period cloisonné enamel tianqiuping decorated with a three-clawed dragon, and a superb Qianlong period zitan box carved with dragons and phoenix.