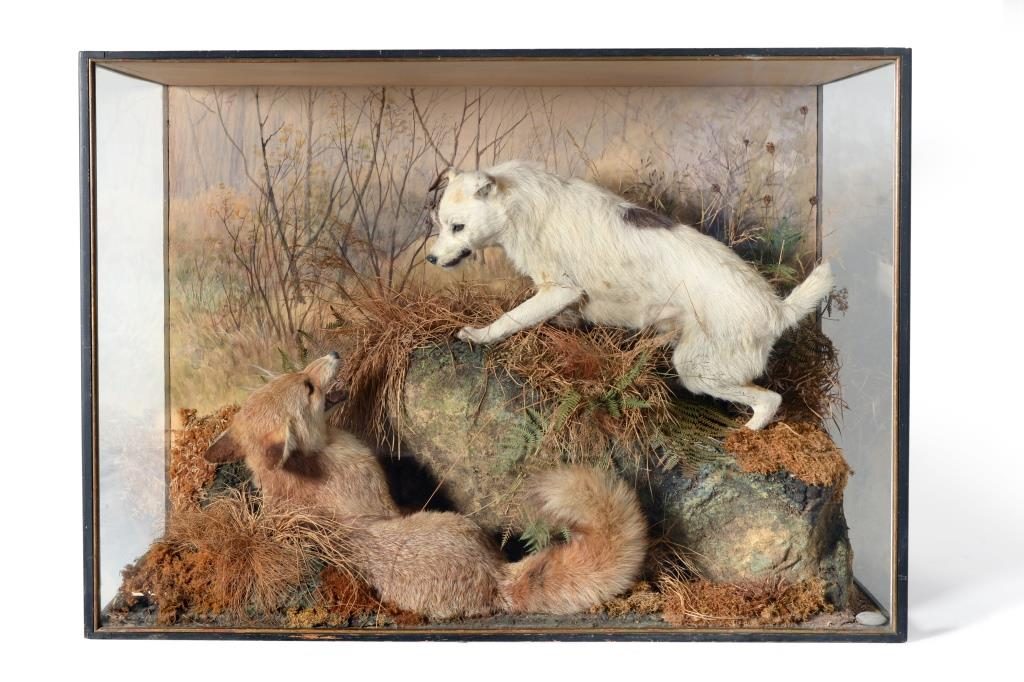 A rare piece of Victorian taxidermy sold recently in Tennants Auctioneer’s sale of natural history and taxidermy for an astounding £8,000 against an estimate of £2,000-3,000. The diorama, depicting a fox terrier and a fox, was made by Peter Spicer of Leamington Spa who is regarded as one of the greatest British taxidermists.

As well as carrying the name of a much sought-after maker, the piece came with an interesting provenance. Squire William Wharton of the Skelton Castle Estate in Cleveland was Master of the Cleveland Hunt; and whilst out hunting one day c.1900, his horse accidentally killed a fox terrier that belonged to one of his tenant farmers, Henry Allison (d.1917). Such was the Squire’s remorse that he commissioned Peter Spicer to immortalise the little dog in a diorama as a gift for Allison to remember his dog by. This impressive taxidermy case was passed down through the family of Henry Allison before being offered for sale at Tennants.

Tennants’ specialist Robbie Bright says, “We had seen a lot of interest in the Peter Spicer diorama before the sale, from collectors all around the world. It is rare that a piece of this quality and condition comes up for sale, particularly a piece with such great provenance that has never been seen on the market before.”

Also proving popular in the sale were decorative items of natural history; interior designers and private buyers are increasingly seeking out unusual and sculptural items of natural history at auction to place in modern interior settings. The top decorative lot in Tennants’ sale was a Giant Clam Shell from c.1930; measuring at over 80cm across, this impressive shell sold for £650 against an estimate of £250-350.