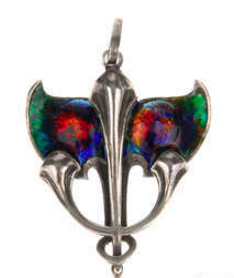 A great variety of jewellery and accessories will be on offer at Fellows‘ forthcoming sale next month.

The auctioneer says there are multiple stand-out items in its early 20th century section, including an iridescent blue glass brooch by Lalique, featuring a stunning elongated diamond shape depicting two birds. There is also a beautiful enamel pendant by Liberty & Co. Both items are classic models inspired by nature from very well-known and popular designers of that era.

There is also a range of modern designer pieces, along with the usual prevalent designer names such as Tiffany & Co., Christian Dior, Pandora, Georg Jensen and Cartier. Furthermore, the sale features two pieces from a designer whose work the auctioneer hasn’t sold before –  two gem necklaces by Eileen Coyne, a name whose work has a great following and her jewellery can fetch very high prices.

There is also a selection of amber jewellery in the sale, most notably necklaces.

The auction takes place on October 2.