Sotheby’s presents Bauhaus_Defining a Century, an auction which demonstrates the breadth of the artistic endeavour undertaken at and inspired by the Bauhaus. Comprising painting, design, photography and metallurgy the sale intends to use the interdisciplinary nature of the school to avow the importance and influence that the Bauhaus still has on visual culture today. Bauhaus_Defining a Century heralds the wave of international events planned in celebration of the forthcoming Bauhaus centennial in 2019; honouring its creativity, innovation and legacy in the 20th century and beyond. 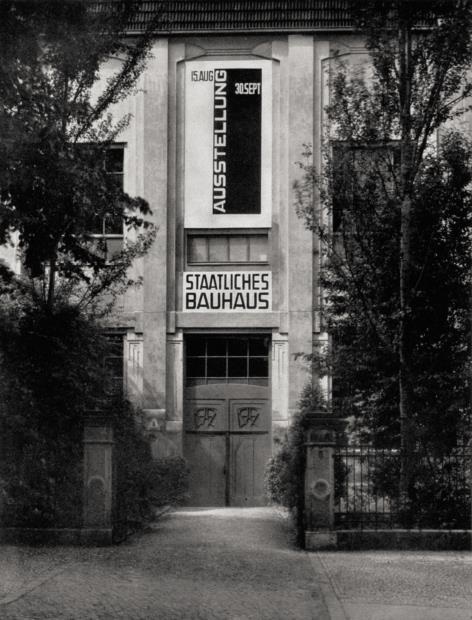 Through 34 lots, the sale at Sotheby’s in London on October 6, will tell the story of a movement that came to define arts and design the 20th Century. Auction highlights include landmark works by legendary members of the Bauhaus faculty including Wassily Kandinsky, László Maholoy-Nagy, Josef and Anni Albers, Marianne Brandt, Paul Klee, Mies van de Rohe, Marcel Breuer and Lyonel Feininger.

Walter Gropius (1883-1959) founded the German art school Staatliches Bauhaus in Weimar in 1919, now known simply as the Bauhaus. The school set out to propagate a new form of collective artistic endeavour which – through its emphasis on harmony and assimilation – might heal the world of some of the psychological damage it had wrought upon itself during the First World War.

Influenced heavily by the British 19th-century Arts and Crafts movement established by William Morris, Gropius’s Bauhaus (literally translated as ‘house of building’) sought to re-establish the principles of shared learning which, like Morris, he felt had been lost; unlike Morris, however, Gropius wished to apply the principles of modern technology and design.

From the outset, the Bauhaus was an innovative and revolutionary movement that pioneered a new approach to the practice of art which encompassed architecture, design, visual art and photography. Forced by political circumstance to close and reopen twice meant the school had to continuously reinvent and re-establish itself, and it’s history can be split into three phases: Weimar (1919-22), Dessau (1923-32) and Berlin (1932-33). It finally closed in 1933, under pressure from the burgeoning Nazi regime.

Forced out of Germany, many key figures of the Bauhaus emigrated to the United States, where their work and

teaching philosophies influenced generations of young artists, architects and designers. Walter Gropius and Marccel Breuer became tutors at Harvard’s influential design school, Moholy-Nagy founded the Chicago Institute of Design, while Josef and Anni Albers taught at the Black Mountain College where their students included Ruth Asawa, Robert Rauschenberg and Cy Twombly. The lasting impression of the school can also be seen in the great buildings of modern America, Gropius’ Pan Am (now MetLife) building in Manhattan alongside Mies Van der Rohe’s Seagram Building and Lake Shore apartments in Chicago celebrate the pure modernism that the Bauhaus gave to the world.

These two postcards were designed to announce and promote the inaugural exhibition of the Bauhaus at the Weimar school held in the summer of 1923. Twenty designs in total were executed. The designers included Paul Klee, Wassily Kandinsky, Oskar Schlemmer, László Moholy-Nagy and others, with each design representing and celebrating the avant-garde, modernist ideals embraced by the school and its students. The Museum of Modern Art, New York acquired an entire set as part of their permanent collection in 2015.

Tired of the tedious dogma of traditional German painting, Albers responded enthusiastically to the radical Bauhaus manifesto of 1919, enrolling at the institution in 1920. As a teacher first at the Bauhaus, then at Black Mountain College in North Carolina and finally at Yale University, Albers exerted his influence on many of the great names of contemporary art, bringing the theories and practices of the Bauhaus education along with him. Cy Twombly, Kenneth Noland, Ruth Asawa and Robert Rauschenberg all studied under him at Black Mountain.

As a female student at the Bauhaus, Anni Albers was barred from undertaking certain disciplines at the school, including painting. She enrolled in the weaving workshop and would go on to become one of the most renowned textile artists of the 20th Century and a trailblazer for a new interdisciplinary art form. In 1925 Anni and Josef Albers (Josef by then a Junior Master at the Bauhaus) were married. Leaving Nazi Germany in 1933, the Albers’ became teachers at the newly established Black Mountain College in North Carolina and in 1949 Anni Albers became the first designer to have a one-person exhibition at New York’s Museum of Modern Art A solo exhibition dedicated to Anni Albers will open at Tate Modern, London on 11 October 2018.

Moholy-Nagy was a prominent teacher and author at the Bauhaus who devoted his career to the relationship of light to material, space, and time, with the aim of extending the boundaries of natural perception. After being asked to join the school by Walter Gropius, he became the prodigy of Johannes Itten as Head of the Metal Workshop and co-taught the preliminary course together with Josef Albers.
Moholy-Nagy played a crucial role in bringing the school closer to its original aim of integrating design and industrialisation. It was during his time in Weimar that Moholy-Nagy developed the photogram as a medium of artistic expression by controlling artificial sources of light and darkroom photographic paper. The result is a series of exquisite images created solely from light, of which Untitled (Dessau) is particularly arresting example epitomising Moholy-Nagy’s revolutionary contribution to twentieth-century art. The present work is believed to be a portrait of Moholy-Nagy’s first wife Lucia Moholy, and is being offered from the Moholy-Nagy Estate.

Comprising: thirty two Chess Pieces, Card Box, together with a Game Board by another hand partially stained pear wood, wood, cardboard, with applied paper
Estimate: £30,000-40,000. This rare chess set, retaining its original card-box, was designed by Josef Hartwig in collaboration with Joost Schmidt, who designed the graphics and additional promotional materials for the set. At the time of its execution, Hartwig was leader of the wood carving and sculpture workshop at the Bauhaus, having accepted the position in 1921.

Hartwig designed each game piece to reflect the directional moves in which it could be executed: “singly or combined, their shape specifies their movement; the volume, their worth” (Joseph Hartwig cited in: Herbert Bayer, Das Bauhaus in Dessau: Katalog der Muster, 1925, p. 11).

In 1921, following the architect Walter Gropius’ invitation to teach at the Bauhaus, Paul Klee moved to Weimar. The subsequent years spent there, and later in his native Bern, were to be the most innovative and productive of his career. Inspired by the Bauhaus relationship to constructivist art, Klee’s work became increasingly abstract and geometric. Haus am Hügel (House on the Hill) is a fine example of this new direction in his art, combining an increasingly abstract, geometric style with the poetic quality always present in his work.

One of the first owners of the present work was the artist’s friend and Bauhaus colleague Ludwig Mies van der Rohe. Having left Germany in 1936, Mies van der Rohe moved to New York. Not yet fluent in English, Mies van der Rohe spent much of his time in the gallery of his friend, the art dealer, Karl Nierendorf. It was here that Mies would often be found unwrapping pictures for new exhibitions and promoting the work of his artist friends, including his old colleagues from the Bauhaus, Wassily Kandinsky and Paul Klee.

Marianne Brandt entered the Bauhaus in 1924 at the age of 31. Discontented with the confines of the gender bias that encouraged female students to study textile design, within her first year at the Bauhaus school in 1924, Brandt completed the six-month foundation course under the tutelage of László Moholy-Nagy, head of the esteemed Metallwerkstatt. He became an in influential figure for Brandt and in taking her under his wing, enabled her to gain entry to the metal workshop, thus becoming the first woman ever to do so. Her unparalleled abilities to combine form and function did not go unnoticed, eventually leading her to hold the title of Deputy Director of the workshop from 1928-29. The present lot allows us an intimate glimpse into the private life of one of the greatest designers of the last century, and clearly displays her ability to elevate and execute the Bauhaus ideals of modernity in all aspects of her life. Beginning with an industrial Wasserkocher manufactured by Omega, Marianne made subtle but impactful modifications. Thoroughly fit for purpose both functionally and now aesthetically, Marianne retained this kettle for her personal use.

Kandinsky had joined the teaching faculty at the newly founded Bauhaus school of art and design in June 1922. His role, alongside Lyonel Feininger and Paul Klee, provided the students with mandatory introductory courses in art and design, as well as, lectures on the most innovative artistic theories of the day. At the Bauhaus, Kandinsky’s mode of artistic expression underwent significant change, and his recent acquaintance with the Russian avant-garde and the Revolution had a particularly profound impact on his art. The evocative title relates to Kandinsky’s unique exploration of music and colour within art. The composition of horizontal and vertical line, particularly to those within the green is demonstrative of an abstracted musical score – the artist encourages the viewer to feel sound of each colour.

In 1920, at the age of 18, Marcel Breuer joined the carpentry workshop at the Bauhaus. It was here that he was influenced by the founding member of the Dutch movement De Stijl, Theo Van Doesburg, who lived in Weimar from 1921 to 1923. In parallel with the Russian Constructivists, whose first congress was held in Weimar in 1922, Breuer’s first designs bear close comparison to those of Gerrit Rietveld who started exhibiting at the Bauhaus from 1921. With the Lattenstuhl – his first armchair – Marcel Breuer created the embodiment of his concept for modern furniture: ‘a light and aerial sketch in space’, creating a chair that was both comfortable and simple in design.

Following the end of the First World War, the American born ‘German’ artist, Lyonel Feininger was invited by Walter Gropius to become the first faculty member at the Bauhaus. In a letter to Gropius Feininger wrote that it was to be “The beginning of the finest adventure in my artistic career …the decisive turning point of my… artistic life”. One of the most highly regarded teachers at the Bauhaus, Feininger sought to encourage all aspects of art and creativity within his students. Deeply influenced by Cubism, as well as Kandinsky’s teaching on colour, Feininger strove towards a modern geometric style. In the ship Feininger had the perfect subject for his experimentation. From as early as 1925 he made model boats, taking them to the banks of the Rega, where he would race them with his young children, often photographing the ships from close range. It was from these photographic studies that Feininger was able to create larger watercolours often re-imagining the natural curves as structured geometric lines.

The present lot was part of a dining suite executed by Rietveld’s master cabinetmaker Gerard van de Groenekan in 1950 for the van Grunsven family. Mr. van Grunsven was employed as Head Designer by Gerrit Rietveld from 1950 to 1959 and retained this iconic ‘Zig Zag’ chair as a reminder of his time spent with one of the most important designers of the 20th century.