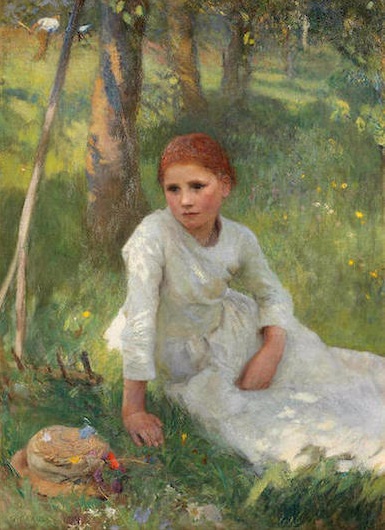 The top selling lot at Bonhams‘ 19th Century Paintings sale was Sir George Clausen RA’s Noon in the Hayfield, which achieved £581,000. The sale, which took place in a packed room, made a total of £3.4 million.

Noon in the Hayfield was painted over several years and is a masterful rendering of the serene, rural subjects of the English landscape. Not surprisingly, it was hotly contested before selling to a bidder in the room. Clausen’s compelling portrait of Marie, A Peasant Girl of Quimperlé was also well received and followed suit by also selling in the room, achieving £77,500.

Three works by the Italian Divisionist, Angelo Morbelli, also made their mark at the sale. Le Risaiuole (1897), discovered by the Bonhams office in Milan, sold for £173,000, against an estimate of £60,000 – 80,000. Morbelli’s Passagio con larici, another newly discovered painting – this time in a private collection in South America – sold for an impressive £87,500, while a third work by Morbelli, Il Telegramma, also performed well, achieving £118,750.

Bonhams Director of 19th Century Paintings, Charles O’Brien said: “This was an excellent start to the winter sale season and we were delighted that the auction was so well-attended – it’s always good to see a packed room. The attention surrounding the works of Morbelli and Clausen, in particular, demonstrates the high regard in which these 19th century masters are held.”

Another success story of the sale was Beltrán Masses’ ethereal double portrait of the Hollywood actress Pola Negri with Rudolph Valentino, which made £149,000. Negri commissioned the Cuban painter, Masses, to paint the portrait of her together with her lover, Valentino, after the screen idol’s untimely death from peritonitis. As Charlie O’Brien commented, “Masses built a successful career as a portraitist, and as a friend of Valentino’s, could capture moments of stillness in the pair’s otherwise dramatic lives. This is a very fine example of the artist’s art deco style, and it was no surprise that the bidding for it was so fierce.”