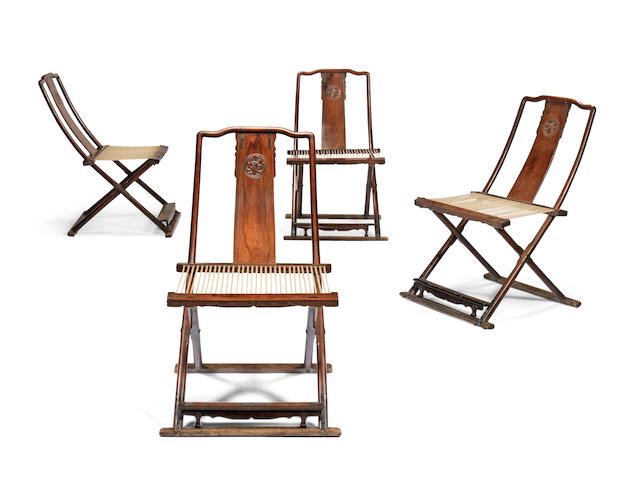 The chairs won the accolade for the most valuable Asian work of art to be sold in London this week.

The folding chairs appear to be the only known version of this form and type, and are widely considered a masterpiece of Ming Dynasty furniture. They had been estimated at £150,000 – 200,000. In a packed saleroom, the bidding war finally came down to a tense battle between a bidder in the room and one on the phone, with the chairs finally knocked down to the phone bidder.

The chairs came from the collection of the distinguished Italian diplomat, Marchese Taliani de Marchio, (1887-1968) and his wife, Magaretha, the Archduchess d’Austria Toscana (1894-1986). From 1938 to 1946, Taliani served as Ambassador to the Nationalist Chiang Kai-shek Government. Despite spending only eight years in China, the Talianis were shrewd and gifted connoisseurs who assembled a collection of extremely important pieces that convey the rich history of Chinese decorative arts.

Other sales of note included an important and exceedingly rare pair of Huanghuali Tapering Cabinets from the Ming Dynasty from the same collection, estimated at £200,000-300,000, they sold for a remarkable price of £1,688,750.

Bonhams International Head of Chinese Art, Asaph Hyman said, “The exceptional prices realised for the rare set of folding chairs and the pair of cabinets are amongst the highest ever achieved for Chinese furniture, a result that reflects their importance. We feel very privileged to have been entrusted with this historic collection.”

Earlier in the week on November 6 and 7, Bonhams Asian Art sale at Knightsbridge made £2,377,150. The top lot was a famille rose scholar and fisherman dish that sold for £93,750.