A book given by Oscar Wilde to a friend as a wedding present, while he lived in poverty as an exile in Paris, has sold for £118,750 at Sotheby’s The Library of an English Bibliophile Part VII.

Wilde sent the book to Frances Forbes-Robertson, a painter, actress and novelist, as a gift to mark her marriage in June 1899.

The First Edition presentation copy was inscribed by Wilde to Forbes-Roberston, “To Frankie on her happy marriage: from her old friend and comrade, The author. June ’99” 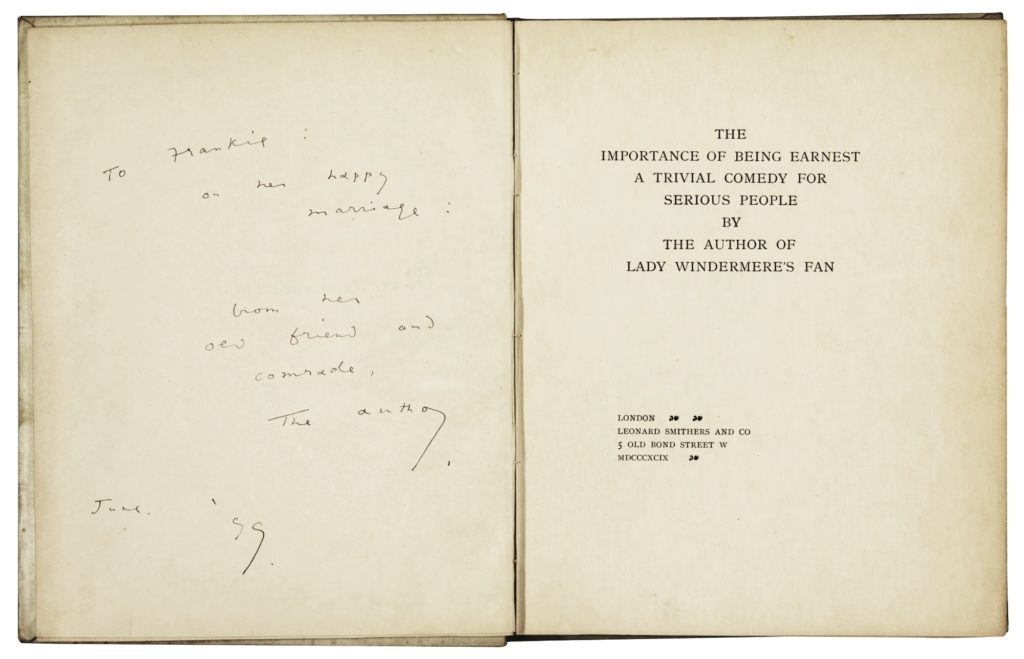 The playwright also originally sent a letter to accompany the book, in which he wrote: “So, dear Frankie, you are married, and your husband is a ‘king of men’! That is as it should be: those who wed the daughters of the gods are kings, or become so. I have nothing to offer you but one of my books, that absurd comedy The Importance of Being Earnest, but I send it to you, in the hopes it may live on one of your bookshelves and be allowed to look at you from time to time. Its dress is pretty: it wears Japanese vellum, and belongs to a limited family of nine: it is not on speaking terms with the popular edition: it refuses to recognise the poor relations whose value is only seven and sixpence.” (The Complete Letters of Oscar Wilde (2000), p.1144).