A rare German tin plate railway set could be the perfect Christmas present for a model railway fanatic, if you have  £100,000 to spare!

Discovered gathering dust in the attic of a country house during a valuation by auction house Dukes’s of Dorchester, the set comprises railway engines, station buildings and bridges.

Unearthed by Guy Schwinge of Dukes’, many of the items were wrapped in newspaper dating back to 1921, indicating that the rare find had lain undisturbed for almost a century. 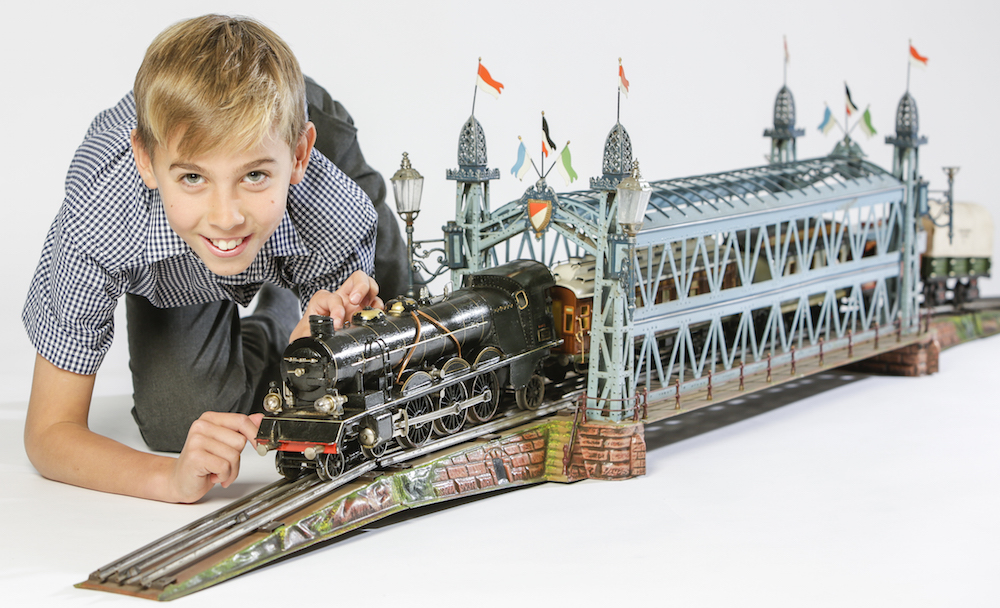 Guy commented, “It is extremely rare to find such an important and untouched collection like this. Discoveries like this, which have survived in largely original condition, excite serious collectors when they come up for auction and we are anticipating interest from collectors around the world”.

The train set represents an early working electric layout. From the dating evidence of the carriage couplings there appear to be no pieces made prior to 1909 and it is unlikely that any of the Gauge One items were made later than 1921. Several of the carriages bear a label on the base from the famous toy store “Il Paradiso dei Bambini “ in Milan. The toy shop on Via Orefici was the grandest emporium in Italy, equivalent to Gamages in London, or the present day Hamleys on Regent Street.

Most of the pieces in the collection were made by the leading tin plate railway manufacturer Marklin of Goppingen in Germany. They originally belonged to a Noble Italian family, so the fact they were purchased from a toy shop in Milan is no surprise.

Highlights include an eight wheel hospital car (in the 1909 Marklin catalogue under the number 1848/1). It has an exceptionally detailed fitted interior and a full complement of casualties resting on the eight removable stretchers. This particular railroad car was originally produced at the time of the Boer War, but it continued to be made in slightly modified form in the years just prior to World War One.

Guy said, “This is an exceptionally rare survival in remarkably fine original condition and we expect it to sell for up to £6,000.”

Arguably the most glamourous item in the auction is a very elaborate blue girder bridge (in the 1909 Marklin catalogue as no. 2505/1) which still retains its full complement of original flags as well as the four ornate lamp brackets at each corner. Sadly some parts of the lamps themselves are missing but these are relatively easy to replace with identical parts from period Marklin street lamps. The bridge is expected to sell for up to £25,000.

The leading tin plate toy collector, author and expert, David Pressland, commented: “Virgin finds like this, which have lain dormant and unloved for many years and yet have survived for the most part in good original condition, always excite collectors.”

He went on, “Collectors are fascinated by minor variations of design and a good example of this from this collection is the magnificent station building. It was clearly a special order for the family because it incorporates hanging “Milano” name boards at each end. This building alone could sell for up to £5,000.”

The train set will be sold on December 8th.