A rare 1934 linocut work that epitomises Futurism and Vorticism by leading exponent Cyril Power will be on the leading lots in Bonhams Prints and Multiples sale next month.

Entitled The Sunshine Roof, the piece depicts the Green Line bus from London to Hertford, driven by the artist’s son, Cyril Arthur Power. The print is estimated at £25,000 to £30,000. 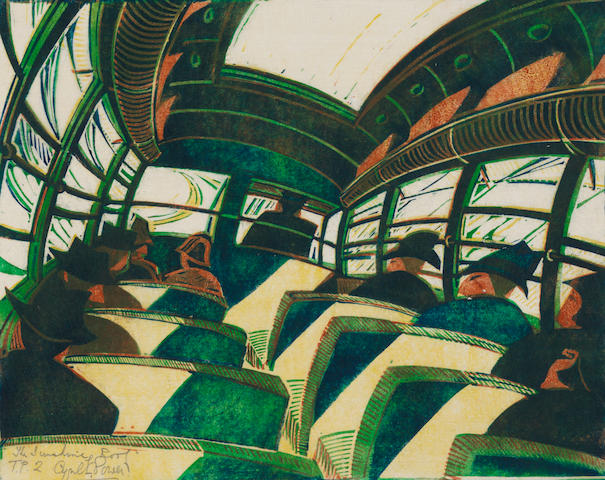 Published in an edition of 60, the linocut has rarely appeared at auction, and will be offered with six other prints by Powers with a combined estimate of £120,000.

Cyril Power (1872-1951) began his career as an architect, making the transition to printmaking in the 1920s. He became both lecturer and student at the Grosvenor school in Pimlico, London. Famous for its vibrant prints that engage the contemporary styles of Futurism and Vorticism, the Grosvenor School sought to express the dynamism of the modern, machine age. Along with his contemporary Sybil Andrews, Power became one of the most prominent alumnus of the school – his years as an architect manifest in fine draftsmanship that uses dynamic patterns and rhythms of color to convey the hectic pace of modern life in London.

Bonhams Director of Prints and Multiples, Lucia Tro Santafe said: ‘The series of seven prints by Cyril Power maintain a remarkable quality of impression that allow them to endure as lasting and vital images of their era – prints of this quality rarely come to auction. As well as Power, the sale will offer prominent printmakers such as Marc Chagall, Andy Warhol and Albrecht Dürer, displaying the rich history and variety of techniques behind the medium of printmaking.”

Other highlights from the sale include:

The sale takes place on December 18.