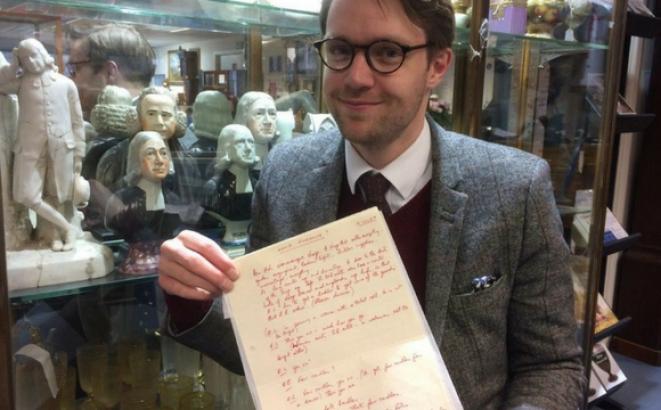 It’s recognised as one of the funniest comic skits to appear on TV, and now an original script for the Two Ronnies’ ‘Four Candles‘ sketch written by Ronnie Barker, is coming up for sale at Hansons Auctioneers with a £30,000 to £40,000 estimate.

The script is penned in red ink by the publicity-shy Barker using his pseudonym Gerald Wiley, which was also a tactic to avoid pre-judgements of his writing talent.

The sketch, also known as The Hardware Shop or Annie Finkhouse, has been enjoyed by millions and is regarded as British comedy gold.

It is frequently found on ‘best ever’ lists, was crowned funniest comedy moment of the 70s on UKTV and finished fifth in Channel 4’s Fifty Greatest Comedy Sketches countdown in 2005. It’s been shown on TV countless times since its first airing in September 1976 and has racked up millions of video views.

At Ronnie Barker’s memorial service following his death in 2005, the vergers held four candles instead of two and there’s even a pub named The Four Candles in the late comedian’s home town of Oxford.

In the sketch, Barker enters a hardware shop with a shopping list and appears to ask for four candles in a broad southern accent.

When the shopkeeper, Ronnie Corbett, hands him the four candles, he replies: “No, fork ‘andles! ‘Andles for forks!” The pronunciation misunderstandings forge on relentlessly.

Inspired by a real-life incident in a hardware shop in Broadstairs, Kent, the script up for auction has previously sold for £48,000 in 2007. It surfaced on an edition of the BBC’s Antiques Roadshow in 2006.

Consultant for Hansons Auctioneers and TV antiques expert Marc Allum said, “I saw the script in 2006 and filmed it for the Antiques Roadshow at Carters Steam Fair in North London. It was then subsequently shown to Ronnie Corbett who confirmed its authenticity. On the day when I filmed it I was completely amazed. To hold Ronnie Barker’s handwritten script for one of the most iconic comedy sketches in history was beyond words.”

His feelings are echoed by Jim Spencer, manuscripts expert at Hansons Auctioneers in Etwall, near Derby. Jim said, “It is an honour to handle and catalogue such an important archive. The Fork Handles sketch is one of the greatest, most memorable, most iconic comedy sketches of all time. “It’s as familiar as Del Boy falling through the bar, or Basil Fawlty saying ‘Don’t mention the war’. Reading the script, I couldn’t help chuckling aloud, the characteristic wordplay and comic use of homophones coming to life on the page – confusing hoes with pantyhose, or recommending ointment for saw-tips.”

He continued, “This ink on paper is the conception of something that has raised millions of smiles and continues to entertain people to this day. I told a friend I’d catalogued this script, and he said, ‘I was watching that last night!’. That’s how familiar and famous this work is.”

Charles Hanson, owner of Hansons Auctioneers, said: “Observational comedy is all the rage today but the Two Ronnies were masters of it decades ago. When the late Ronnie Corbett authenticated the script, he noted that while it was unusual for Barker to write in red ink, it was undoubtedly his handwriting. Corbett surmised that the script may have been donated to a charity fundraiser, as Barker, being uncomfortable with appearing in public, would often donate an item to charity rather than appear in person.”

The sale takes place at Hansons Auctioneers on December 20.