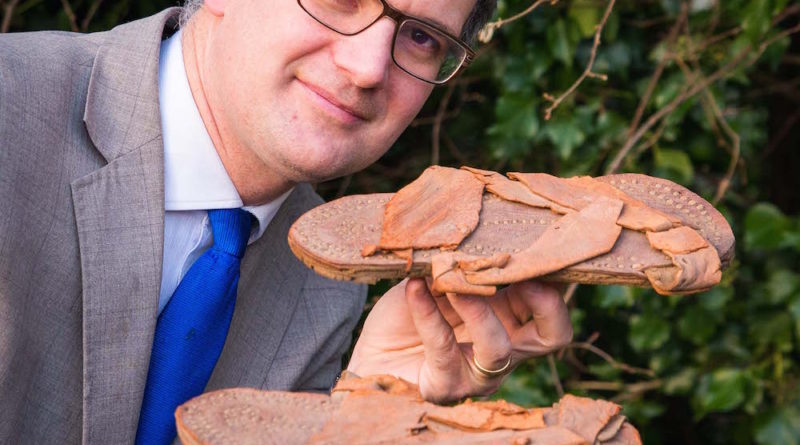 Lawrence of Arabia’s century-old Arab sandals – unearthed in a Waitrose carrier bag in Derbyshire – have sold for thousands at auction.

Though they looked a little battle-weary, they were still wearable and part of an incredible collection of items that belonged to one of Britain’s most important military figures.

The Lawrence of Arabia collection sold at Hansons Auctioneers Derbyshire, today for £2,600.

Other items sold alongside the sandals included book, Napier’s English Battles and Sieges in the Peninsular. It was awarded to Thomas Edward Lawrence by the City of Oxford High School in 1903 and had a ‘Midsummer Examination’ prize label.

There was also a copy of Lawrence’s famous book Seven Pillars of Wisdom. It is dedicated ‘To Rodney Havelock Walker on your Christening Day, 10th November 1935. From Father & Mother, as a memento that you were christened in the author’s Christening robe‘. Pictures of the baby wearing the robe were included in the lot together with a photo taken in Libya by Lawrence.

Charles Hanson, owner of Hansons Auctioneers, said: “When I pulled Lawrence of Arabia’s sandals out of a Waitrose carrier bag I was astonished – and delighted. And I am equally delighted that they have now gone to a new home.” He continued, “Lawrence of Arabia is one of Britain’s most iconic figures, a man who played a key role in world history and inspired one of the most famous films ever made.

“We understand the sandals were worn by the great man himself. Though in a delicate condition, they are remarkable survivors from almost a century ago. They must have faced rocky and sandy terrain and may be war-weary.”

Lawrence, a British military officer, diplomat, writer and archaeologist born in Wales in 1888, became renowned for his liaison expertise during the Arab Revolt against the Ottoman Empire in the First World War. The breadth and variety of his activities and his ability to write vividly about his exploits, earned him international fame as Lawrence of Arabia – and inspired a film of the same name starring Peter O’Toole. Nominated for 10 Oscars, it’s considered one of the most influential films in the history of cinema.