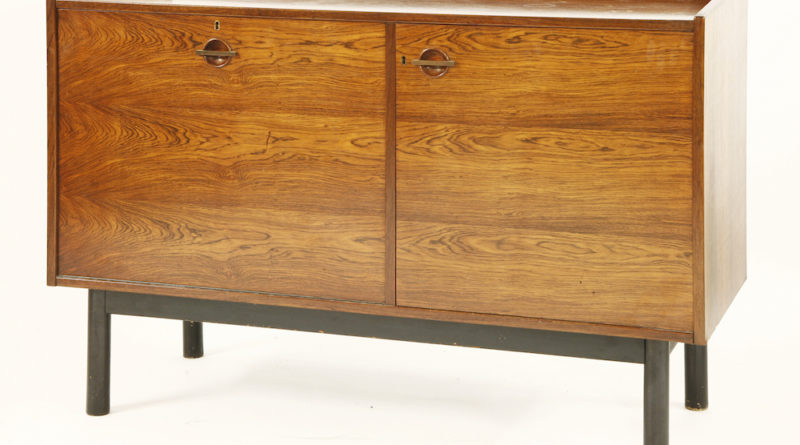 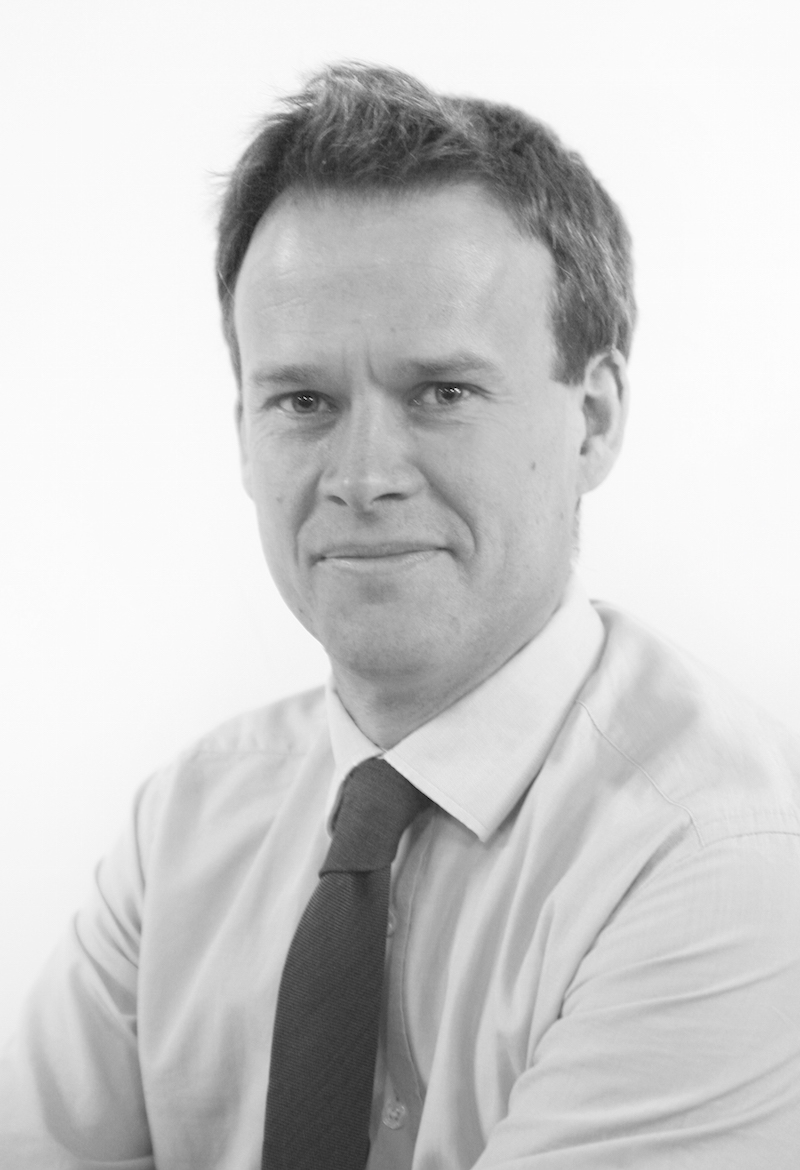 The sale comprises three distinct sections: arts and crafts, art deco and modern design and furniture. Over the last few sales, Sworders has concentrated on growing theScandinavian furniture and design element and now have a section solely dedicated to contemporary lighting, objects and design.

The Essex auction house’s next 20th century Decorative Art & Design auction takes place on January 30, so we asked specialist John Black to pick out his favourite lots and explain their unique appeal.

A Robert ‘Mouseman’ Thompson oak dresser, the panelled back with three shelves, over an adzed top, with an arrangement of six drawers and a pair of cupboards, with panelled sides and back, chamfered corners, with mouse signature. 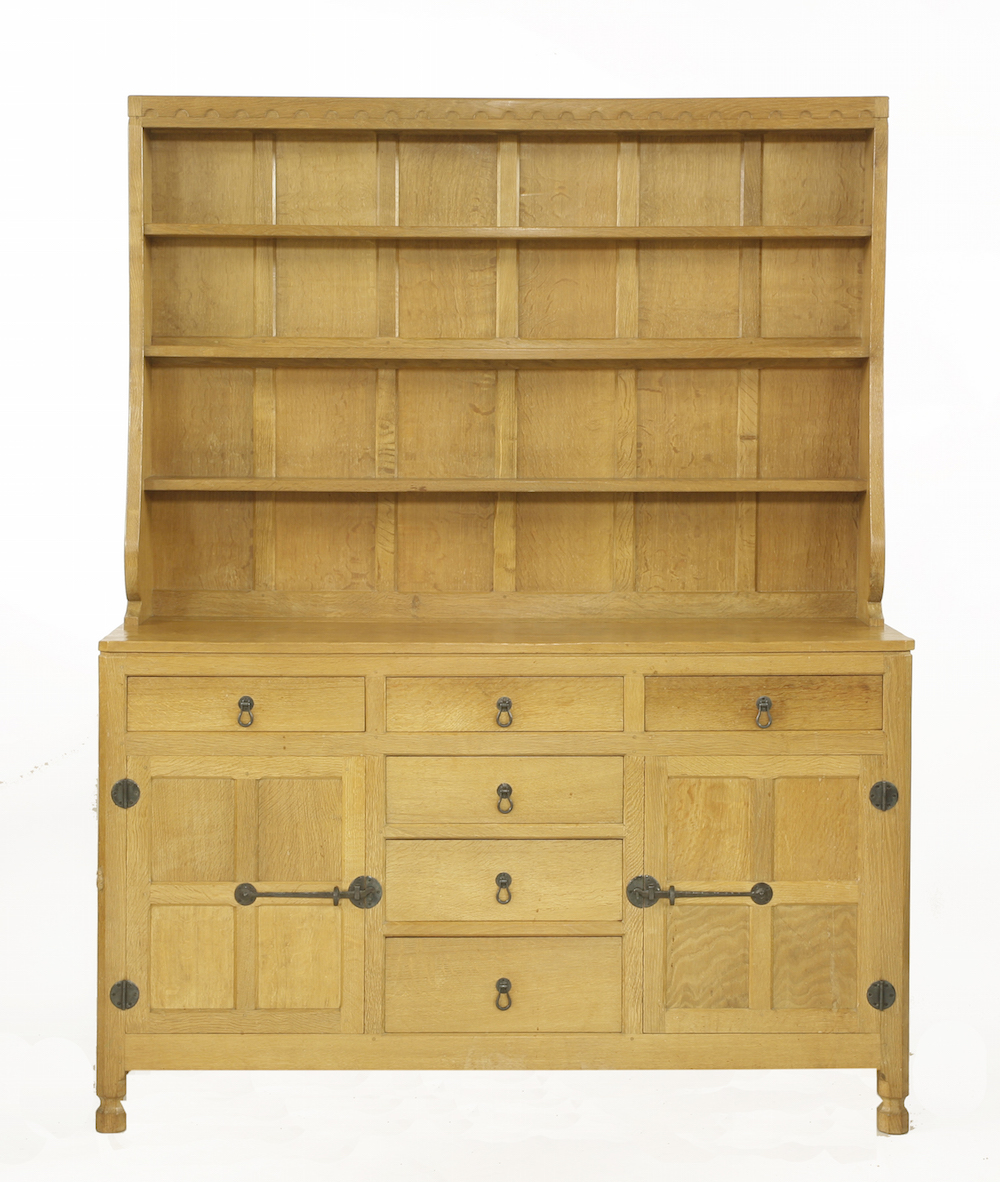 John says, “Two later pieces and based on his early designs. These date from the 1970s, are produced from light oak and fit well into modern homes and interiors. These are good examples of the British Arts and Crafts tradition continuing from the 1920s through to the present day.”

Designed by Mechal Rabinowicz in 1947 and made by the Emor Radio Company Ltd., the chrome-plated globe with top vented speaker grille, with an equatorial dial, raised on a chrome-plated column with ‘S, M, T’ settings on a painted circular cast iron base,

The globe radio was operated by turning the whole body whilst an internal stationary light would indicate on the tuning band where the setting was. Originally available in a gold finish as well as some pastel colours.

John says, “This radio was designed in 1947 by Polish designer Mechal Rabinowicz for Emor Radio Company, it seems ahead of its time and looks to the future of space inspired design in the 1950s and 1960s. Part of its ingenuity is to tune it you turn the whole radio, the central lit register shows the band frequency. The V & A Museum has this radio in their collection – iconic.” 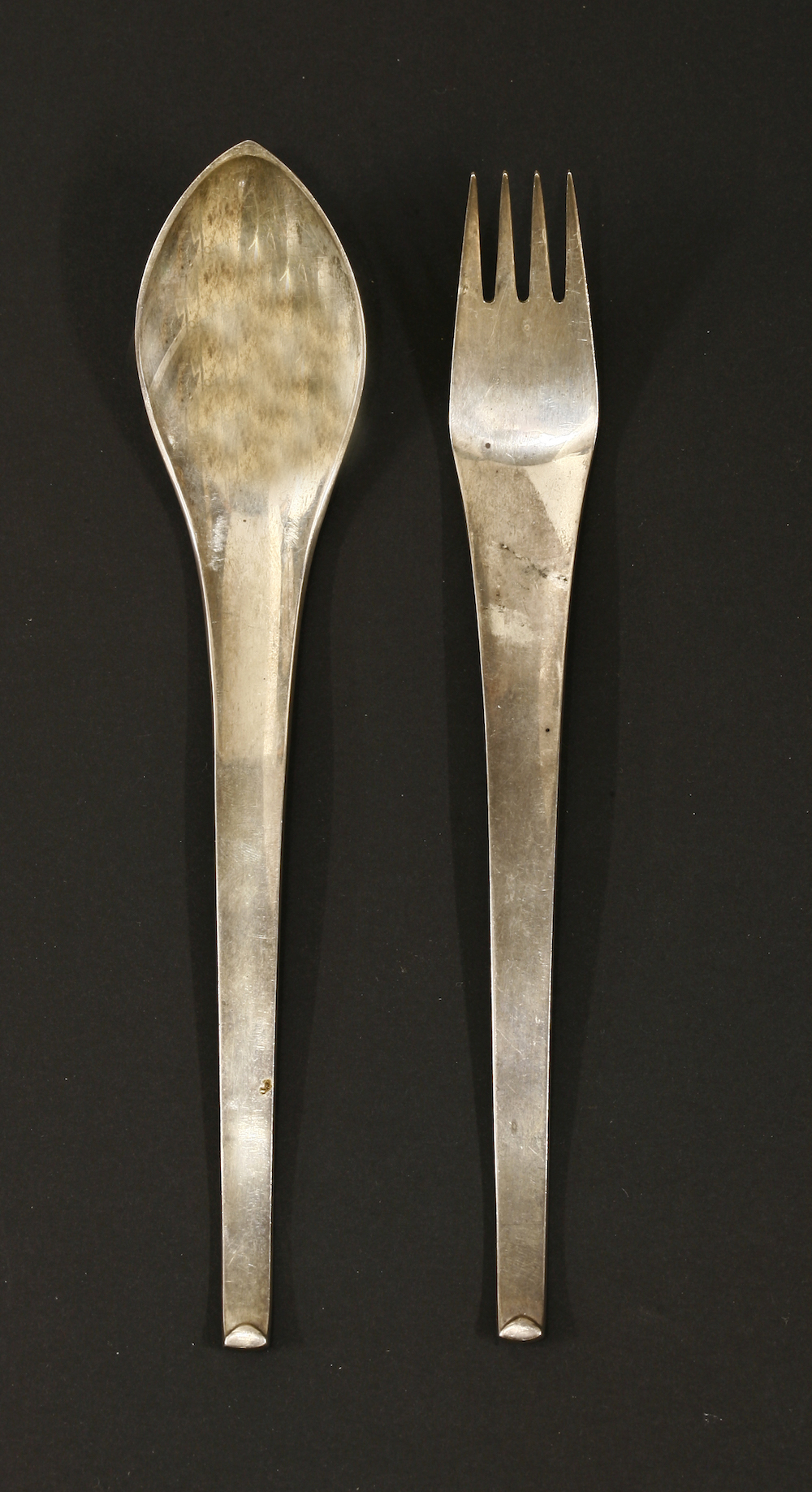 John explains, “This shows us why Danish design is so great – through its simplicity and functionality. Hallmarked in London 1963 – Hans Hansen was well known for his jewellery as well as his flatware designs. I would love to use these every day.”

A Danish rosewood ‘Dan-Bar’ with a three-quarter gallery, over a base hinged drinks compartment, with two trays, fitted with an ice box, with ‘Danish Furniture Makers’ Control’ label, on turned legs, 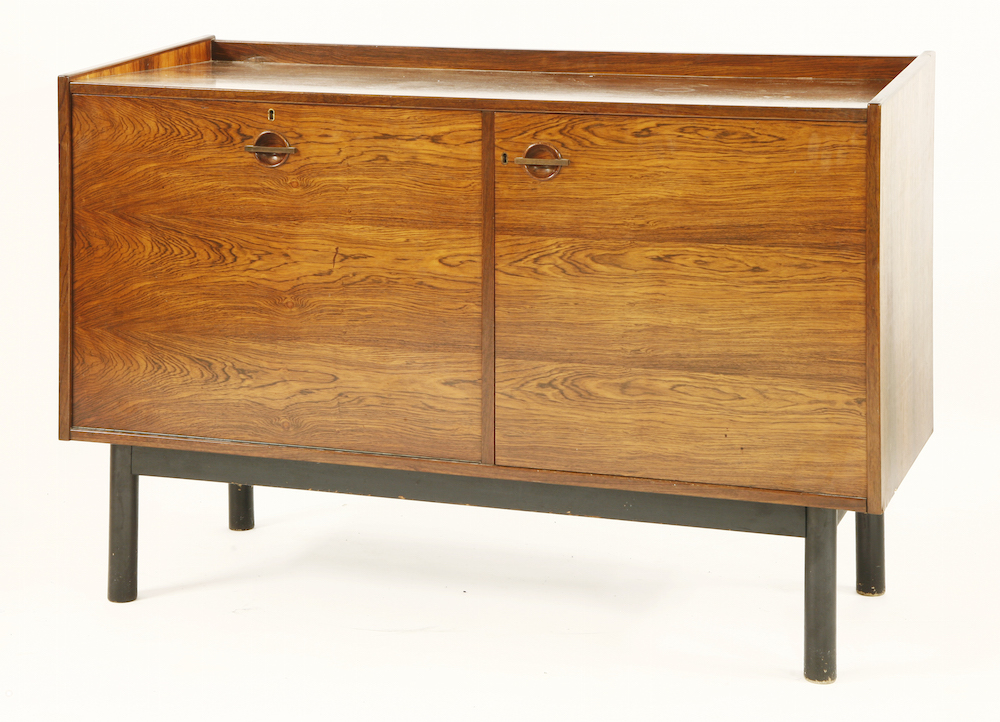 John says, “A great piece of functional design, apparently removed from the Royal retiring room at the Odeon cinema in Leicester Square – one could own the bar that served to their Royal Highnesses!” 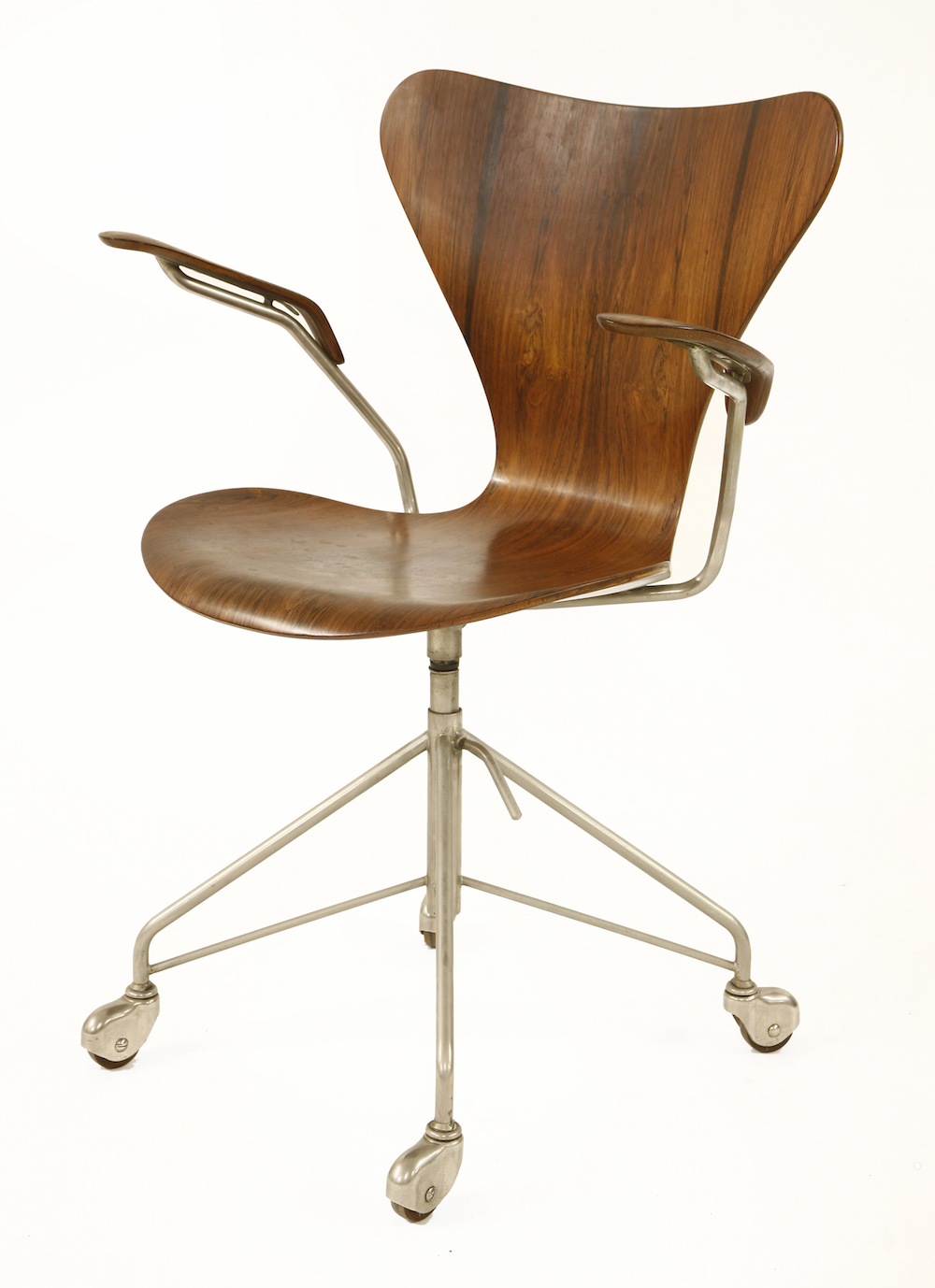 “Based on the earlier Ant chair and designed by Arne Jacobsen – this desk chair used the same moulded plywood and tubular metal construction which suited high volume industrial design. It would have been made in different woods, but this one is veneered in Brazilian rosewood ‘Dalbergia Nigra’. It’s a design classic that and oozes sophistication, its comfortable and a must for a keen collector in today’s market.”

John says, “Howard Keith, who set up the company, said in 1933, ‘We offer quality originality and design that are timeless but of its time’ One could not put it better – designed in the 1970s by John Home, it is totally wild and comfortable! Think platforms, collars and flares…”

One thought on “That’s My Lots – John Black of Sworders”