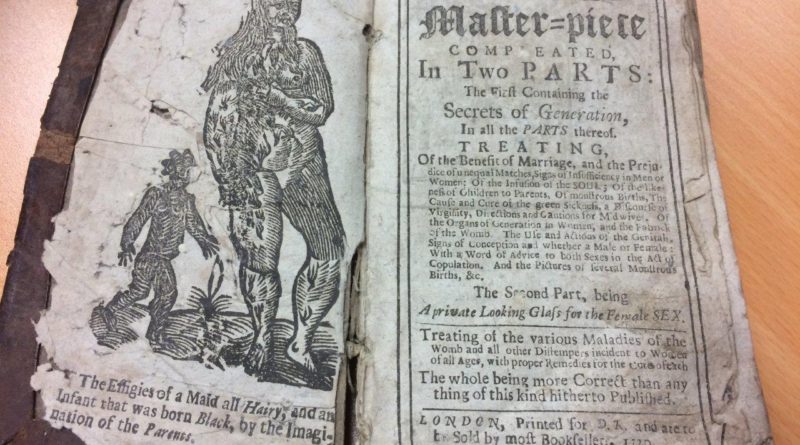 The weird beliefs of our Georgian ancestors are laid bare in a ‘sex manual’ dating back to 1720 and banned until the 1960s is set to sell in Derbyshire next month.

The 300-year-old book, entitled Aristotle’s Masterpiece Completed In Two Parts, The First Containing the Secrets of Generation, was published in London.

Alongside various illustrations of bizarre and beast-like creatures that are the result of being ‘begot by Women’s unnatural lying with Beasts‘, the book also has advice for husbands about their sex lives. One such passages reads, ‘A Word of Advice to both Sexes in the Act of Copulation’: ‘I do advise, before they begin their conjugal embraces to invigorate their mutual desires and make their flames burn with a fiercer ardour by those endearing ways that love can better teach than I can write. And when they have done what nature can require, a man must have a care he does not part too soon from the embraces of his wife’.

Elsewhere, the title strikes a more romantic tone about the benefits of marriage, as the author states, ‘Without doubt, the uniting of hearts in holy wedlock is of all conditions the happiest, for then a man has a second self to whom he can unravel his thoughts as well as a sweet companion in his labour’.

Hansons‘ book expert Jim Spencer commented, “A century after women first won the right to vote in the UK, this book takes us back to very different times. It talks of man being ‘the wonder of the world, to whom all things are subordinate’. Meanwhile women are painted as being prone to sexual indulgence.”