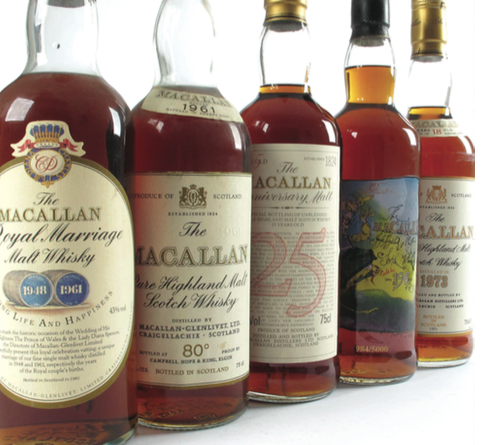 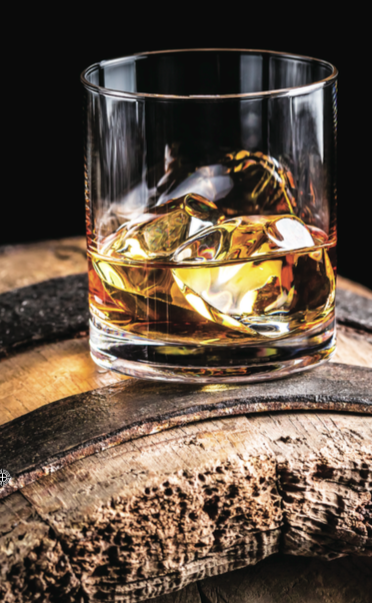 While the last 20 years has seen the fine whisky market begin to mature, collecting Macallan whisky has been at the forefront of demand. With the price of one bottle of Scotch rising more than 8,000 percent in just over 21 years, your next best “find” could come from your drinks cabinet, says expert Mark Littler.

The history of Macallan whisky

There can be no doubt that the most sought-after whisky on the market is made by the Macallan distillery.

The distillery was established in 1824 and, throughout the 19th and 20th centuries, was an important distillery for the production of blended malt whisky.

Following this change in direction, Macallan strived to become the Fabergé (to use an antique analogy) of the whisky world. Their whisky is matured almost exclusively in ex-Oloroso sherry casks, which are both expensive and scarce. Such is their demand, Macallan now makes casks from Spanish oak and lends them to sherry producers so they can have a reliable supply.

Always wanting to be one step ahead of the game, Macallan saw an opportunity to establish itself as a leader in the luxury whisky market. Its subsequent bottlings of 50 and 60-year-old Macallan in Lalique decanters, and the ultra-exclusive ‘Fine & Rare’ range firmly placed Macallan at the top of all whisky collectors’ wish lists.

The Market for Macallan whisky 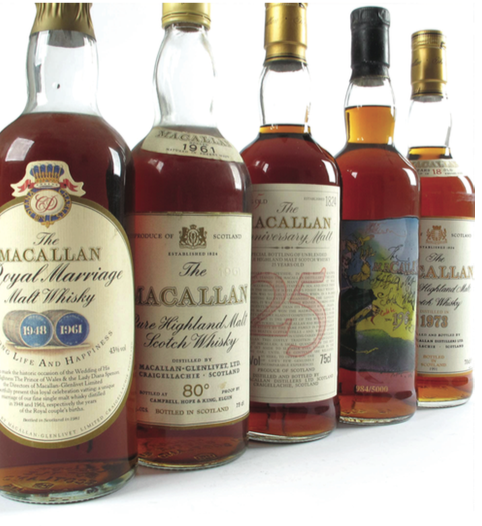 So just how expensive and sought after is Macallan?

Needless to say these sales represent the top of the Macallan market. UK auctions are dominated by bottles in the £500-£5,000 bracket and it is these bottles that we will look at more closely. However, before we do, there are a few important considerations to bear in mind.

The main difference between a bottle of whisky and any other collector’s item is the way in which the whisky market is regulated.

In order to sell alcohol you need to be on the Alcohol Wholesale Registration Scheme (AWRS) and if you want to advertise alcohol for sale, or retail it to the public, you need a personal and a premises licence. As a result the big retailers have a monopoly.

How whisky is sold

For instance, if you have a rare Star Wars “Yak Face” figure from the 1980s you can list the figure on eBay. If the price you ask is less than others are asking (one such figure sold in December for £9,999) you can be relatively sure your item will sell first (assuming condition is equal).

However, as alcohol is licensed there is no way you (the public) can list your bottle privately and undercut the retailers. All of the normal routes to market, including eBay, are off limits.

What is the open market price of whisky?

This means there are two prices for any bottle of whisky. The open market price (which we will use in this article) is the price bottles regularly make at auction, and the price you can get for your bottle.

The retail price of whisky

The retail price is the price only those on the AWRS (who have a personal and premises license) can achieve. Broadly speaking this is 100-300 percent higher than the open market value. This means that you will be disappointed if you are expecting to sell your bottle for the same amount that you see listed online
(through merchants etc).

What affects value of Macallan whisky?

The six main factors that affect the value of Macallan whisky are:

This relates to the time the whisky spent in the cask, not how long it has been in the bottle. This is indicated on the label and can vary from five to more than 30 years.

This relates to when the whisky was bottled (1980s, 1990s etc). Holding onto a bottle for a long time does not necessarily mean its value will increase as the whisky does not improve once bottled, unlike wine. However, as bottles are consumed, the remaining bottles become rarer, so a ‘standard’ malt released in the 1980s is now considered sought after.

There are two types of limited-edition bottlings. The first is single cask editions limited to the number of bottles of whisky contained in the cask. The second type is made for a specific event, such as the Macallan “Private Eye” or the Macallan “Royal Marriage.”

The distillation year refers to the specific year the whisky was distilled (made). It is one of the most important factors that can impact the price of your bottle of Macallan. A vintage is expressed as a date on the bottle from the year the whisky was produced. The vintage has no effect on the quality of the whisky (unlike wine vintages) but they are viewed in the same way as coin dates or stamp sheet numbers (where collectors try and collect one from each year).

The level of the whisky should be into the neck (the narrow part). As alcohol is more volatile than water, it is the alcohol that will evaporate first which lessens the flavour. If the level is lower than the neck it will have a big impact on the price.

The label on a bottle of Macallan whisky is very important, and if it is damaged in any way, it will have a negative impact on the value.

The whisky bottles also need to have their original cartons/boxes if they were issued with them, in order to get the best price. A bottle without its original box could be worth up to 30 percent less.

Over the years, Macallan has released various editions to commemorate historic events, or whisky that has been matured over a defined period of years. These editions attract much interest from whisky collectors and have increased in value since their original release. 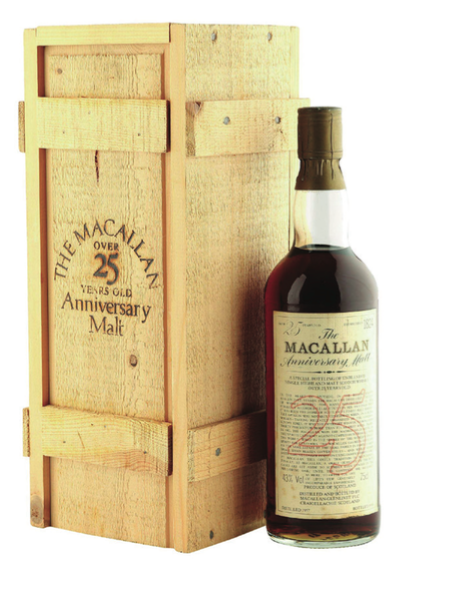 One of the most sought-after ranges of Macallan is the 25-year-old Anniversary Malt. Housed in distinctive wooden boxes with Macallan branding, the first edition was distilled in 1957 and was matured for 25 years, being released at £25 per bottle in 1983.

The last bottling of the edition was released in the year 2000. Hereafter the 25-year-old range was released without declaring a specific year that the whisky was distilled in. 25-year-old anniversary malts now sell for around £1,000 per bottle for one of the later editions, rising to more than £3,000 for some of the rarer vintages.

Following on the heels of the 25 year old was the series of 18-year-old bottles. The first editions bottled whisky distilled in 1965 and the range continues to this day.

The 18-year-old range was sold in cardboard boxes rather than the wooden cases of the 25-year-old Anniversary Malt. As such, very few of the early editions are found with their original box. An early bottle with its box may command 30
percent more than one without, and a modern bottling without its box may lose 50 percent of its value.

At auction the very early editions can sell for well over £2,000. The later editions are more common so command a lower price.

The Macallan Private Eye is a real rags-to-riches story. Released in 1996 at £36 per bottle it was bottled to commemorate the 35th anniversary of Private Eye magazine.

It is a vatting (a combination of more than one Macallan cask) with no specific age declaration. Only 5,000 bottles were released and the labels were designed by Ralph Steadman. 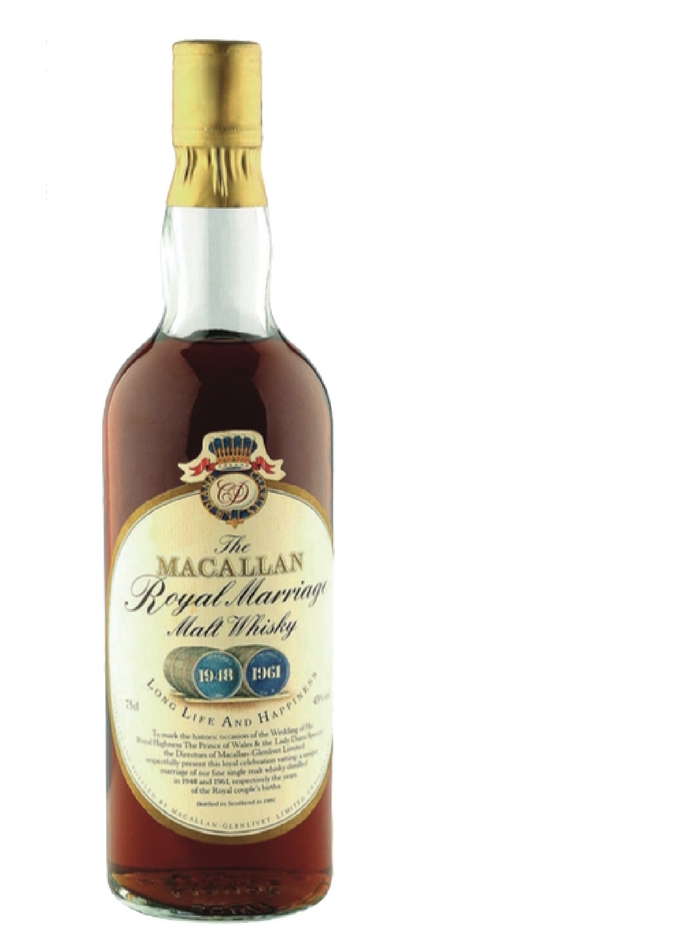 There have been two editions of Macallan ‘Royal Marriage’. The first was to commemorate the marriage of Prince Charles and Diana with malt whisky distilled in 1948 and 1961 (the respective years of their births). This edition now regularly sells for £2,000-£3,000 per bottle.

The second edition was a marriage of two casks, one filled on April 29 1996 and the other April 29 1999 to celebrate the wedding of Prince William and Catherine Middleton on April 29 2010.

This is the crowning jewel in Macallan’s range. The company states: “The Fine & Rare Collection represents the best of the Macallan’s oldest maturing stock.” The oldest vintage in the line-up dates from 1926 and, in March 2017, the most recent bottling from the 1991 vintage was released.

Unlike other bottlings mentioned ‘Fine & Rare’ bottlings are released at a substantial sum, most in excess of £10,000 per bottle. Needless to say demand is very high both at retail and at auction. In December 2017, Christie’s sold a bottle of Macallan 37-year-old Fine & Rare, distilled in 1940, for £19,200.

Although Macallan itself bottles and releases a large number of bottles, private companies such as Gordon & Macphail and Signatory Vintage also bottle and release casks of Macallan.

However, these bottles are not as collectable or sought after compared to distillery releases. One such bottling is the 1966 Gordon & Macphail Speymalt (Macallan). This bottle sells regularly for less than £1,000, yet any distillery releases of a 1966 malt often sell for more than £2,000.

The boom in collecting Macallan whisky

The value of many of the Macallan bottlings have risen by thousands of percentage points, with the majority of these increases taking place in the past five to 10 years. The following demonstrates just how much the market has changed in recent years (all open market figures).

The future market for Macallan whisky

Many (myself included) believe the market cannot sustain its recent monumental growth. However, a complete crash is 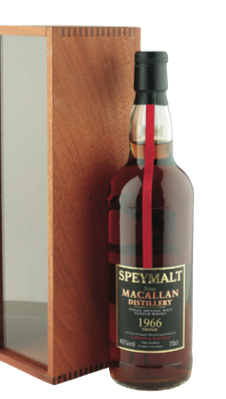 unrealistic. More likely is a correction of prices with future growth before continuing on a slower trajectory. As more owners of bottles of Macallan begin to realise the value of their drinks cabinet,

the market is going to become saturated and no one knows if demand will continue to outstrip supply. One positive in this respect is the number of bottles that are continuing to be consumed – steadily increasing the rarity of the remaining bottles. Cheers!

Speyside single malts are distilled in the area around the River Spey in Moray and Badenoch and Strathspey, in northeastern Scotland. Though a comparatively small appellation, Speyside includes the majority of Scotch whisky distilleries, including Glenlivet, Glenfiddich, Glen Grant and Macallan.