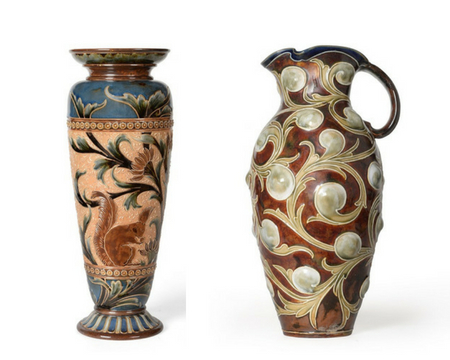 Two extensive collections of British art pottery are to go under the hammer in North Yorkshire next month, featuring a host of celebrated potteries.

The first collection to go under the hammer at Tennants Auctioneers includes examples of Doulton Lambethware and other British art potteries such as Troika, Cobridge and Bretby.

The collection was formed by Myra and David Turner, who began collecting ceramics shortly after their marriage in 1959. During the 1970s, their focus turned to Doulton Lambethware, and particularly the work of studio artists Hannah and Florence Barlow, George Tinworth and Eliza Simmance. Their passion for collecting continued throughout their lives, diversifying to textiles and collectables, but always with a focus on ceramics.

Doulton was founded in 1815, as a partnership between John Doulton, Martha Jones and John Watts based at Vauxhall Walk, Lambeth.

In 1866, Henry Doulton, John’s son, launched a new range of art pottery from a studio at the Lambeth factory, employing artists from the Lambeth School of Art. The highly decorative stoneware art pottery caught the attention of both the public and Queen Victoria and the factory output became extraordinarily popular.

The collection includes many pieces by Hannah and Florence Barlow, famed for their decorative animals and birds. Hannah Barlow is the most well-known of the Doulton artists, and worked at the factory for 42 years,

retiring in 1913. Hannah had a particular love of animals, and was adept at incising their likenesses directly into the wet clay. Her younger sister Florence is noted for her fine birds, executed in a pâte-sur-pâte technique in a style that never changed.

The second collection on offer is a private collection of Linthorpe Pottery, including pieces designed by Christopher Dresser.

For ten years, from 1879-1889, Middlesbrough became a trend-setter for Victorian art and design, under the artistic influence of one Britain’s greatest designers and leading light in the Arts & Crafts movement – Christopher Dresser.

Established on the failed Sun Brick Works in Linthorpe Village, Middlesbrough, it produced a new type of art pottery, heavily influenced by Dresser’s fascination with Eastern and South American design.

From the start, Linthorpe Pottery was greatly admired by critics, and as it tapped into the Victorian interest in Orientalism and the Aesthetic Movement, proved popular with the masses. The simple designs and vivid glazes were designed to be beautiful, functional and economical.

The sale takes place on September 8.