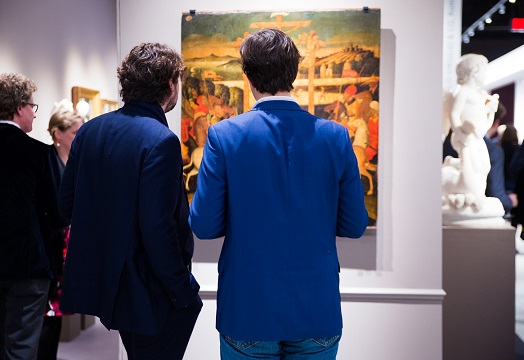 TEFAF New York Fall returns this weekend through to Wednesday, featuring over 90 of the world’s leading art and antique dealers at the historic Park Avenue Armory.

The Fair will also include 10 new exhibitors, and will showcase top quality, strictly-vetted works from a variety of collecting areas including fine and decorative art from antiquity to 1920, as well as rare books and manuscripts, jewelry, portrait miniatures, arms and armor, and much more.

TEFAF said it has, “refreshed the conversation and the climate for historic art in America by highlighting its relevance and providing an innovative platform and collector experience”. In a year that saw Salvator Mundi sell for $450 million at a contemporary art auction, Victoria Beckham hosting Old Master Paintings at her store in London, and Beyonce and Jay-Z filming their music video in the Louvre – older art has firmly crossed-over into the pop-culture milieu in a most discernable way.

For more than three decades, TEFAF has been widely regarded as one of the world’s pre-eminent organisations devoted to fine art, design and antiquities, celebrated for its dedication to historical importance and unrivalled

quality. The specialist dealers at TEFAF are experts in their fields, providing both a wealth of knowledge and an all-encompassing picture of cultural and artistic evolution and development through a range of time periods and mediums in an elegantly curated display at the Armory.

Returning for this year’s Fair are monumental works displayed in the public spaces of the Armory, outside of the exhibitor’s booths and historic rooms. This program utilises the soaring spaces and unique architectural framework of the Park Avenue Armory to enable dealers to showcase larger scale works which adds to the overall offering at the Fair.

The event will also include a dynamic range of exceedingly rare, museum-quality, and historically  significant pieces, such as a full-length portrait of George Washington by Gilbert Stuart (1755-1828) offered by exhibitor Hirschl & Adler.

Amongst the decorative works of art being brought to the Fair are Thomas Chippendale’s (1718-79) The Brocket Hill Saloon Chairs (1773) shown by Ronald Phillips, which once belonged to Sir Elton John, as well as a gold brooch (c. 1842) a gift from Prince Albert to Queen Victoria to commemorate the birth of their first born child, also called Victoria, brought by Wartski.

Also notable and new to market, is a singular and rare compilation of five of Ovid’s Heroides (c. 1493) presented to queen consort Anne of Brittany, which is presented by Dr. Jörn Günther Rare Books AG.