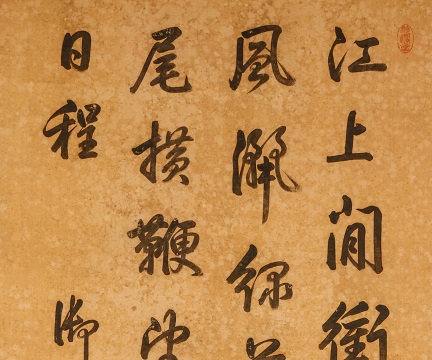 A rare calligraphic work by an 18th-century Chinese Emperor has sold for an impressive £70,000, almost ten times its estimate of £6,000 to £8,000 at London’s Chiswick Auctions.

The Qianlong Emperor (1711-1799) of the Qing Dynasty was arguably the greatest collector and patron of the arts in more than 5,000 years of Chinese history.

The Emperor was also a poet and calligrapher in his own right having written tens of thousands of poems during his lifetime. His collection spanned Chinese, European, Japanese and Indian works.

The work in the auction is a poem by Wei Zhuang (836-910), which was included in Literary Compendium, the Complete Library in Four Branches of Literature commissioned by the Qianlong Emperor in 1772.

Whilst Imperial works from the Qianlong Emperor’s reign come up for auction from time to time, works by the Emperor himself, whose official title was “Son of Heaven”, are extremely rare.

Calligraphy is considered China’s highest art form and its Chinese characters (the components of Chinese writing similar to words) are written in a fixed sequence, so it is possible to track the order and process of the artist in a way not possible with other art forms.

“The work allows us to share a moment of artistic creation and reflection with one of the most important Emperors in China’s history,” said Lazarus Halstead, Head of Asian Art at Chiswick Auctions who previously studied Chinese Paintings at Oxford University and Peking University.

Last year Chiswick Auctions broke an Auction House record selling a single handscroll painting for £267,000, for which they also won the Asian Art in London prize.