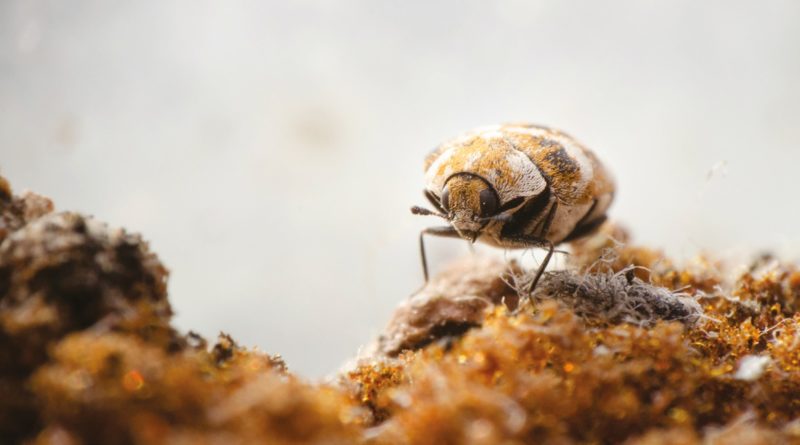 Our heritage conservator George Monger tackles the pests that may be laying waste to your collection of antiques.

There was a great deal of publicity recently about a moth infestation in the House of Lords. But it’s not just parliament at risk – many buildings host insects which can be dangerous to collections containing organic materials such as wood, leather, paper, natural textile, hair, feather, skin.

Indeed, the insects that pose a danger are also an essential part of nature’s eco system, so it is better to try and prevent pest damage rather than have to apply remedial treatments. However, before considering how collections can be protected and treated for insect attack it is necessary to be aware of which insects can cause problems.

Pests are the silent assassins of collections and can surreptitiously destroy part or entire pieces. They often damage the dark side of an object, rarely the side easily visible, and the adult beetle or moth will usually fly or move towards the light, making the inspection of window sills a useful monitoring tool.

Most people are aware of the common furniture beetle (anobium punctatum) otherwise known as woodworm, whose presence is easily recognised by the telltale exit holes in wood.

There are, in fact, several wood boring insects all of which have slightly different exit holes and frass (the powder which falls out of the holes). The appearance of exit holes may mean that there is active woodworm activity and much of the damage will already have occurred.

Most insects have a very similar lifecycle but all have the same effect. The beetles mate and lay microscopic eggs in end grain or rough wood, or sometimes old exit holes (but not on a polished surface). The eggs hatch into the wood and the grub proceeds to eat its way through the wood for some time (it could be up to two years).

Finally, it chews its way close to the wood’s surface where it becomes a chrysalis before transforming into the beetle, which bites its way out of the chrysalis chamber between March and September. This is what causes the the characteristic woodworm holes. The beetles will bite through other materials to get out of the wood – paper, leather even thin metal. Because the beetle, which is very short lived, has an agenda: it needs to fly and mate. Therefore it is the larvae of the beetle, rather than the beetle itself, which does most of the damage a fact true of most other pests.

So it is not the moth which damages textiles, fur or leather, but its larvae. Similarly, it is the voracious larvae of the varied carpet beetle (anthrenus verbasci) known as ‘woolly bears’ which poses a threat to all manner of textiles. It is also worth noting that not all moths are a danger to collections; the ones we are concerned with are the common clothes moth (tineola bisselliella), the case-bearing clothes moth (tinea pellionella), the white-shouldered house moth (endrosis sarcitrella) and the brown house moth (Hofmannophila pseudospretella).

In terms of collection care, we want to prevent pests from getting into the collection in the first place, so it is important to identify and remove the source of the insects. These could include birds’ nests, old food, deceased rodents or other small mammals under floorboards.

There are sticky pest traps, some with pheromone tablets, which can be used to identify a pest problem, or potential problem, and help to determine its source.

However, these will not cure the problem. Cure starts by identifying the source of the pest.

Several years ago my father-in-law was perturbed by an infestation of what appeared to be furniture beetle but was, in fact, biscuit beetle. The source turned out to be an old, half-empty cereal box on top of a tall fridge-freezer. Once the box had been disposed of the infestation ceased.

Monitoring, using sticky blunder traps, will indicate if there is an insect pest problem, and judicial use of monitoring traps can help to determine the source of any pests.

It may be all well and good identifying pests but what can we do if an infestation gets into our collections?

First of all, don’t panic. Take your time to determine the extent of the damage and isolate the objects to stop the infestation spreading (by sealing them in polythene, for example). Once isolated, there are a couple of options for treatment.

The simplest is to seal the object in polythene and freeze; the temperature should ideally be down to around -25C for at least 72 hours. Most materials can be safely frozen. Some museums have large walk-in freezers and may offer this as a service.

Pesticide treatments exist which are formulated as an emulsion and tested safe for most materials.

If you want to see what insects are present in your collection, use a simple easy-to-buy “blunder” glue trap.

The term “blunder” comes from the fact there is no lure and you will capture whatever insect blunders into the trap. The traps are generally made of paper, that lies flat on the ground or shelf, with a thin glue layer (1mm or less) that will trap most insects that wander into it.

Some blunder traps are only 5-6cm (2-3in) long and can also be used in conjunction with pheromone lures, or food attractants.

George Monger ACR, is a conservation expert and consultant for a number of museums and national heritage organisations. For more details on his work call 01449 677900.