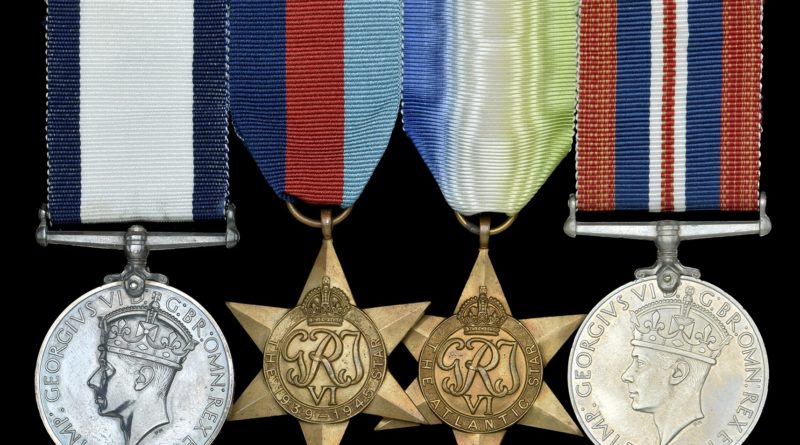 A Conspicuous Gallantry Medal (CGM) awarded for the daring attack on the German battleship Tirpitz in September 1944 is estimated to fetch between £40,000 to £50,000 in a London saleroom later this month.

The medal was awarded to Edmund ‘Eddie’ Goddard, who was just 20 years old when he joined the Royal Navy in 1941 and later played a part in one of the most famous attacks of the Second World War against what was the heaviest battleship ever built by a European navy in a Norwegian fjord.

Nimrod Dix, Deputy Chairman of auctioneer Dix Noonan Webb and Director of the Medal Department, commented, “We are delighted to be offering for sale this prestigious group of medals awarded to Edmund Goddard, for his heroics as helmsman of the Midget Submarine X6 during her attack on the Tirpitz. This is the only CGM awarded for the attack on the Tirpitz, and one of only two ever awarded for X-craft.”

He continued, “The CGM was sold by the recipient at Sotheby’s in October 1983. It is now being sold by a collector who has had it for many years. The Naval C.G.M. is one of the very rarest gallantry awards. Instituted in 1855, only 247 were ever awarded, the last one being for the Gulf in 1990.” 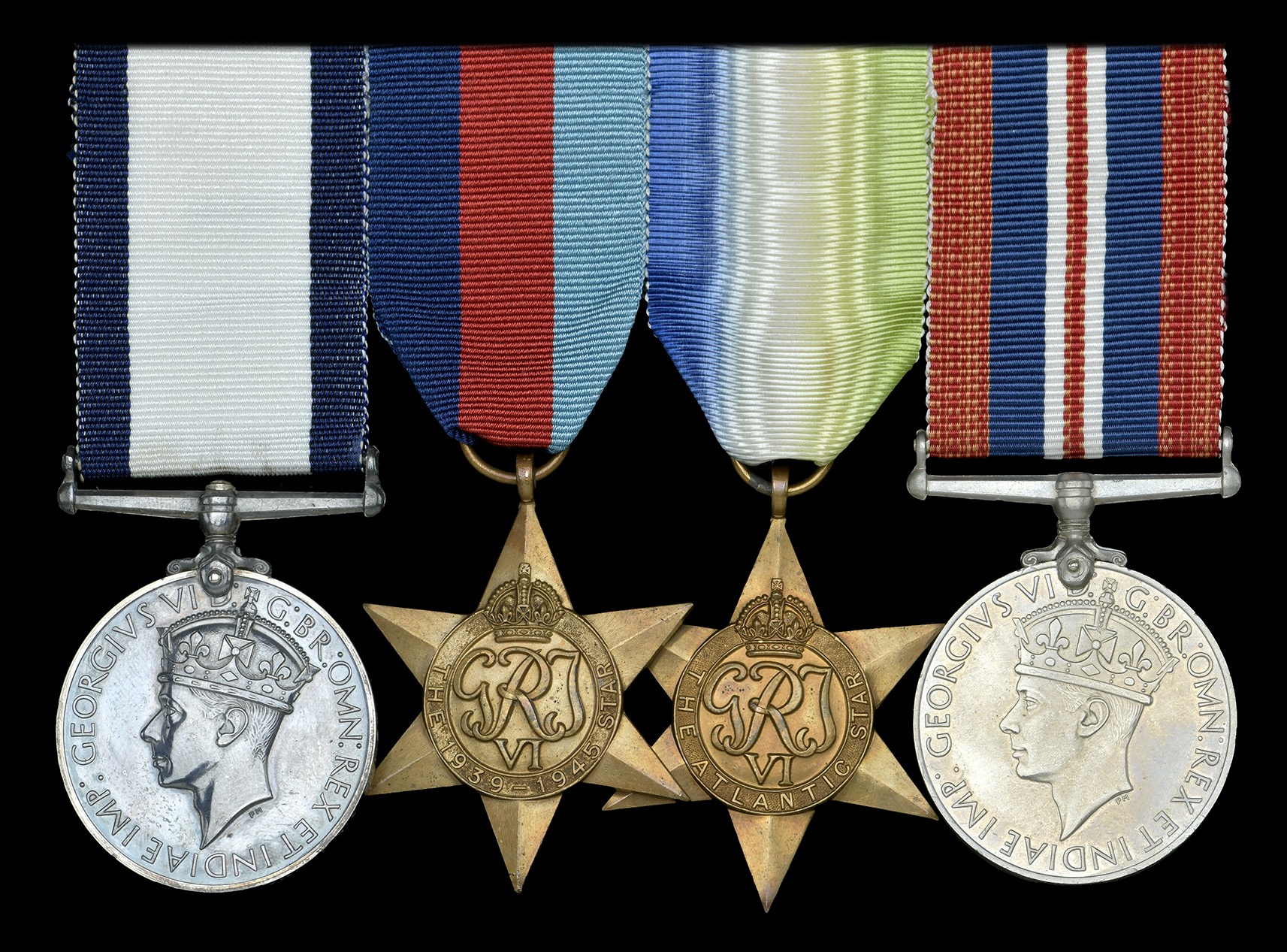 The attack on the Tirpitz

The German battleship Tirpitz acted as a major influence over the movements of the British Home Fleet, and consequently a way had to be found to attack her in harbour. The answer to the problem was the four-man Midget Submarine or X-craft. At fifty feet in length the X-craft was small enough to penetrate the fjord defences of the harbour, yet large enough to carry a four-ton charge and to operate unsupported for several days.

In May 1942, six operational X-craft were ordered from Armstrong Vickers, and the call went out to volunteers for ‘special and hazardous service’.

Thorough and dangerous training began in the waters around the Isle of Bute in the summer of 1943, and by September 1944 the crews had been brought to ‘concert pitch’.

On the 10th, news came that the Tirpitz, Scharnhorst and Lutzow were all at anchor in the fjords. Using conventional submarines as tugs, the X-craft were towed over 1,000 miles to their starting points before embarking on their individual assigned missions.

However, during the eight-day journey to the slipping position, tragedy struck when X9 parted her tow in foul weather and disappeared without trace. X8 also ran into difficulties and had to jettison her explosive charges. 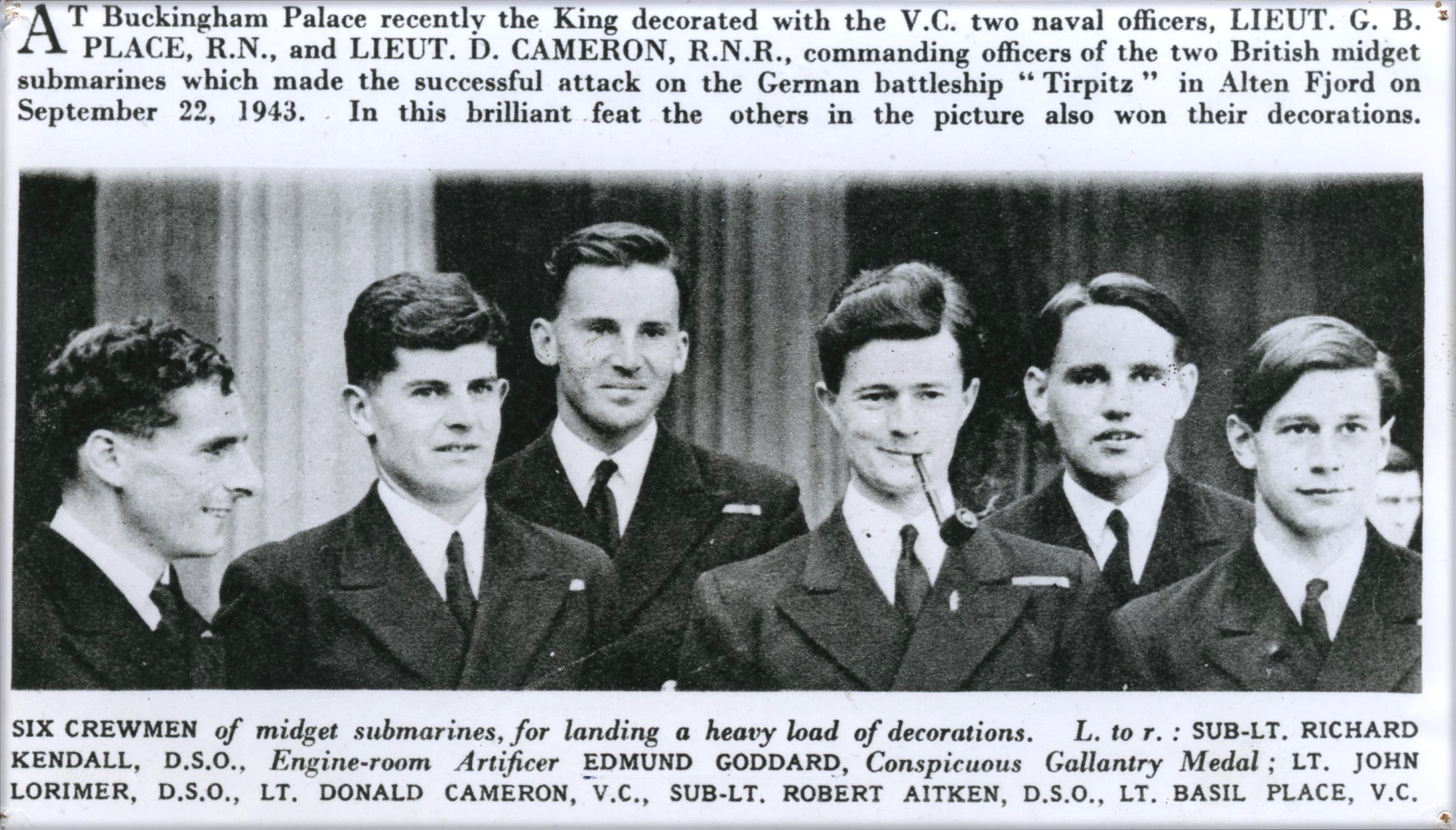 After exchanging the passage crews for operational crews, X5, X6, X7 and X10 slipped their tows, on time and in the planned positions. Ahead lay a 50-mile journey fraught with danger. X10 was detailed to attack the Scharnhorst but various mechanical failures meant that this attempt had to be abandoned. X6, in which Goddard was helmsman, X7 and X5 were all detailed against the Tirpitz.

Acting independently, the three X-craft began their journeys to the Tirpitz lying in Kaa Fjord on 20th September.

The first obstacle to be negotiated was a minefield and this X6 crossed on the surface. At 1 a.m., when Stjern Sound was entered, Cameron discovered that X6’s periscope was leaking, a defect that was to have serious consequences later on.

By noon they had reached the Alter Fjord and that evening they arrived at their predetermined waiting positions close to the entrance to the Kaa Fjord.

After ‘a rather disturbed night charging, making good defects and dodging traffic,’ it was found that X6’s port charge was defective, and so Cameron re-set the fuse to fire one hour after release.

Shortly after 5 a.m., Cameron was able to make out a small Coaster, heading up the fjord towards the great battleship and leading the way through the open gate of the anti-submarine boom net that enclosed the Tirpitz. Once inside, X6’s periscope proved almost entirely useless, and so the final approach had to be made half blind. At 7.20 a.m., X6 broke surface just 80 yards from the Tirpitz and was sighted.

Whilst the German sailors rushed to their battle stations, X6 dived beneath the last line of defence, a 50-foot anti-torpedo net.

Passing under the Tirpitz’s keel, X6 hit an obstruction, and Cameron, thinking that they must have struck the net on the far side, decided to check his position. X6 came up under Tirpitz’s port bow and manoeuvred astern, bringing the Midget Submarine to a position abreast “B” turret, where her four-ton amatol charges were released.

With a useless periscope there was little possibility of reaching the open sea and so Cameron gave the order to scuttle X6 and give themselves up. Under a hail of small arms fire, Goddard threw open the hatch and, followed by Kendall, Lorimer and Cameron, stepped aboard a German launch into captivity.

In an interview many years later for the B.B.C. documentary ‘Target Tirpitz’, Eddie Goddard recalled: “We were taken on board Tirpitz’s quarter-deck and told to empty all our pockets, which we did. Then we were taken below, and put in a corridor, and I heard lots of clanging of chains and whatnot, and I thought, oh dear, they’re going to move the ship before our charges go off. Eventually the charges did go off, which shook us a bit; all the lights went off, and a foam extinguisher started to pour forth on my German guard who didn’t like it very much. He grabbed me by the neck, and we went up on deck, and I was very disturbed the ship didn’t appear to be sinking.

He carried on: “They lined us up before a group of guards with tommy guns; they were all very hostile and murmured ‘Schweinhund’ and other things. Then an interpreter came along and asked us how many boats were there and so on, but we just gave them our names and numbers. He got very annoyed and said that if we didn’t play, he’d have to shoot us. He pointed at Lorimer and said to me, if you don’t give me the information, I shall have to shoot your comrade too. Oh, well, I said, you just go ahead and shoot him.”

Meanwhile, onboard the X7 mini submarine, Lieutenant Godfrey Place had successfully laid charges, but his attempt to escape was fraught with misadventure.

He tried frantically to get through the net but X7 was still stuck in it when the charges went off at 8.12 a.m. The impact in fact blew her clear of the nets but her compasses and diving gauges were out of action, and the boat was difficult to control and broke surface several times, whereupon Tirpitz’s guns opened fire and inflicted damage on her hull and periscope.

As X7 sat on the bottom with almost all her high-pressure air exhausted, Place decided there was just enough air for one more trip to the surface and that he must abandon the craft. So X7 surfaced about 500 yards off Tirpitz’s starboard, whereupon Place got out and began to wave a white sweater.

Unfortunately water lapped into X7 and in her low state of buoyancy it was enough to send her to the bottom. Place was taken prisoner, as was Sub-Lieutenant Aitken, who made a miraculous Davis Apparatus escape three hours later, but Lieutenant Whittam and E.R.A. Whitley were drowned.

The exact fate of Henty-Creer’s X5 is uncertain but it would seem that he reached a position 500 yards from the outside of the inner net and was sighted on the surface from Tirpitz at 8.43 a.m., after the charges had detonated, and was sunk by gunfire and depth charges, all of her crew being killed.

Cameron, Place, Goddard and the other survivors became prisoners of war and were lucky to escape execution under Hitler’s notorious ‘Commando’ order.

The Tirpitz was badly damaged and would be no menace to allied convoys for many months.

The explosion had lifted her 50,000 tons bodily about five feet. Damage caused included:

Despite this serious damage, the six survivors of the X-craft crews were all well treated aboard their victim, where their bravery was greatly admired. They made their way slowly through Norway to Dulag Nord in Germany for a dose of solitary confinement and interrogation, and then to Marlag-Milag Nord prisoner-of-war camp, near Bremen, on 28 November.

In March 1945, when P.O.W.’s were being marched from Marlag-Milag Nord, to Lubeck, in the face of the Russian advance, Goddard and two others took advantage of a bend in the road and a nearby wood to break away unseen. After surviving for more than a week on the run, they passed through the German lines, having swum the Wummer River in winter with their clothes on their heads, and were found by advancing British troops.

Goddard was presented with his C.G.M. by the King at an investiture at Buckingham Palace on 22 June 1945. After the war, Eddie worked at the Newbury Diesel Company as a commissioning and troubleshooting engineer and later as manager of the Reading branch of C. W. Glover. He died at Tilehurst, Berkshire, in 1992.

The Orders, Decorations, Medals and Militaria sale will take place on February 27 and 28.