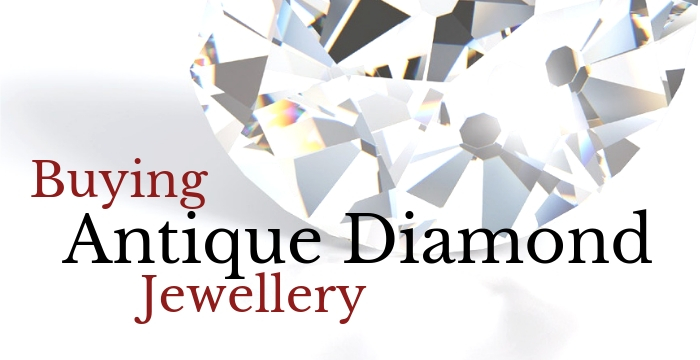 As demand for the world’s most valuable gem continues to grow, now is the time to invest in antique diamond jewellery, writes jewellery expert Robert Ogden

Any discussion of antique diamond jewellery should begin with the following assertion: diamonds are currently, by far, the most valuable gemstone. For example, the deep blue 45.52cts Hope diamond, bequeathed to the Smithsonian Institute by Harry Winston in 1958, would be valued at $350m today (close to $7.7m per carat).

By contrast, the highest values found in other gemstones would likely be rubies (the Crimson Flame ruby (15.04cts) sold in 2015 for $18m, a price per carat of  $1.2m. And prices just keep on rising.

De Beers, the world’s leading diamond company, has been warning for some time that supply cannot keep up with the ever-increasing demand for diamonds from the US, China and India which together comprise around 65 per cent of the world market.

The last major discovery of a diamond mine was in India more than 10 years ago, at the Bunder Project, which Rio Tinto recently handed back to the Indian state.

Existing mines are becoming depleted, particularly those in Botswana, Namibia and South Africa, and the need to dig ever deeper has made operations less profitable.

A polished diamond takes a further three to four months to enter the market. As a result, global diamond production is expected to peak in 2019, according to Bains. The management consultant predicts the supply of new diamonds will then fall by one to two per cent each year until 2030.

The scarcity of new finds, combined with ever-increasing demand, is beginning to create a sellers’ market, driving prices ever higher.

Diamonds are universally traded in dollars. Based on the pound-to-dollar conversion rate alone, a diamond priced at $50,000 would have risen in cost by £8,400 between December 2015 and October 2016, a rise of 26 per cent in a period of just 10 months.

All of this means that the diamond jewellery you are currently wearing could have risen in value considerably since you last had it valued for insurance – making it an ideal investment.

It also means that when valuing any piece of diamond jewellery, the diamonds themselves are always going to be the major component in determining value.

As demand for the world’s most valuable gem continues to grow, some of the best value for money currently seen in the market is in antique and vintage diamond jewellery.

Because of their hardness, diamonds don’t wear as fast as other stones and, after a short spell in the workshop, an antique diamond ring will present as well as a brand new ring.

There are several reasons why antique diamond jewellery is under-priced in the market when compared to modern jewellery, but a major one is the VAT margin scheme. This applies to secondhand goods, works of art, antiques and collectors’ items.

Under this scheme, VAT is only applied to the profit margin and not to the full retail value, meaning a jeweller is able to offer a piece of jewellery at a much lower selling price.

It is important to note that this scheme only applies to a piece of secondhand jewellery, not to its component parts. If it was broken up and re-modelled into different items of jewellery, these would be classed as new items and not eligible.

Similarly, loose gemstones could not be sold under the margin scheme.

Another reason for antique diamonds being under priced is taste. Most gems used in antique jewellery, or any piece made before the 1930s, are likely to be older-cut stones, which handle light differently from the sparkly diamonds you see in modern engagement rings.

Most old-cut stones would have been cut by hand – possibly by candlelight or gaslight – and will handle light with varying degrees of shine. But the modern, brilliant cut was designed to optimise the flow of light in and out of the stone, thereby providing more fire and sparkle.

The difference in financial values between the cuts is one reason why many diamond dealers choose to re-cut old-cut diamonds into modern brilliant-cut diamonds, losing some weight in the process but gaining significant short-term values.

Of course, long term, the older cuts will increase in rarity and, therefore, values. Meaning there are many in the trade prepared to hold on to their old-cut stones.

Ultimately that is a good thing for jewellery, as the Old European-cut diamond has a charm and a magic all its own. One could not imagine historic pieces of jewellery without it.

While any student of fine jewellery would mourn the loss of a beautiful tiara or a stomacher (a piece of jewellery designed to be worn on the front of a bodice), practicality has always guided jewellery prices.

One need only witness the sums being offered at auction for less useful items, such as cameos or snuff boxes, to see market forces in action. The expertise of an artisan carving a cameo is rarely reflected in the price, and the same is true in the world of ‘estate’ diamond jewellery.

In contrast to loose or rough diamonds, the market for antique or vintage jewellery sold on the margin scheme is definitely a buyers’ one.

There are many principles which affect the value of an antique piece of diamond jewellery. Uppermost is the market value of the raw materials and diamonds. Therefore, the first task would be to gauge the size and quality of the gems in question.

The diamonds used in most Victorian or Edwardian tiaras will chiefly be old cuts.

Take this late 19th-century tiara which we recently valued.

In the picture below you see the same tiara off its frame and laid out, with some diamond weight calculations shown.

The 426 old-cut diamonds, selected all those years ago for perfect match of cut, colour and clarity (estimated at H-J colour, VS clarity), amount to nearly 90cts in weight.

Added to which would be the value of the metal (in Victorian times silver settings were usually fused onto 15ct or 18ct gold, in later eras this would have been white gold or platinum). The weight of the tiara is 223 grams.

The weight of the diamonds is just 0.2 grams per ct, or 18 grams in total – the rest being silver and gold.

The style of jewellery

Only then would a valuer look at the make of the piece and the quality of its design and execution. There is, of course, an inherent value in the piece of jewellery, an integrity that goes beyond the raw materials.

In some parts of the trade this will be more of a factor than in others, and it is particularly significant if the piece is signed by a prestigious jeweller such as Cartier or Giuliano.

There are other elements that can add value, such as whether it is in a fitted case that is contemporary to the piece.

This tiara is obviously a beautiful construction, and almost impossible to recreate in the event of loss. A facsimile value (the price of completely recreating the piece in a modern-day workshop) would be astronomical.

Therefore the only sensible basis of valuing it for insurance would be ‘period/antique replacement value’, based on the price one would pay to replace it with a tiara of equivalent age and quality in the current market.

Pieces like this tiara are fast becoming extremely rare and they are clearly only for those with the deepest pockets.

To the impatient dealer they will always dangle the promise of quick gain from their component parts: multiple line bracelets, earrings, pendants, etc. However, if preserved as an integral piece, they become something else. A family heirloom and an asset that is only expected to appreciate.

Why are diamonds so expensive?

Apart from the process of cutting, or faceting, which is designed to enhance the stone, a diamond is a completely natural product, formed over billions of years in the earth’s crust from pure carbon.

Diamonds of a high quality, especially the larger ones, are still comparatively rare and difficult to simulate in
the laboratory. There have been recent developments in man-made diamonds but, until now, the quality has been nowhere close to that found in their natural counterparts.

In any case, a synthetic diamond is unlikely ever to exceed the value of the genuine article, in the same way that a Picasso or Monet print will never outsell the original.

By way of example, synthetic sapphires and rubies, which have been created in laboratories since the early 20th century, change hands for very low sums of money.

These include its hardness (it scores a perfect 10 on the MOHS scale of hardness, a long way above the hardness of the next hardest mineral); its brilliance (it is highly refractive and a well-cut stone will disperse many spectral colours) and its lustre – the lustre of a diamond is three times more reflective than glass, for example. 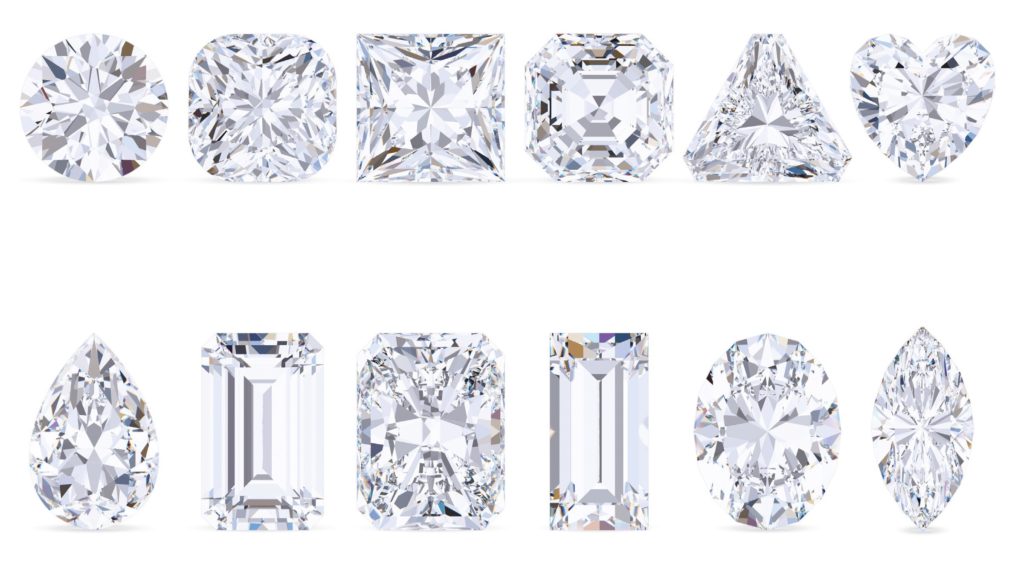 Diamonds can be cut a wide variety of ways, as illustrated in the above image. The cuts, from left to right in the top row, are:

The cuts, from left to right in the bottom row, are:

The diamonds shown above are some of the older styles of cut. A clear line of development can be traced to the modern brilliant cut, the framework for which was created by Marcel Tolkowsky in 1919.

We see many family heirlooms and, over the years, our workshop has become adept at repairing, remodelling and even creating facsimiles of Victorian, Edwardian or art deco jewellery.

To carry out this work our goldsmiths will use a variety of methods and equipment borrowed from previous eras. We also keep a large stock of older diamonds, including mine, rose, single and, of course, European old cuts, to replace missing stones.

Tiaras, stomachers and the more elaborate brooches are rarely worn these days and are, all too often, no longer of use to the owners, or simply of too high a value to keep permanently in a secure place. It is perhaps understandable that the client will often request that they be broken up and made into more wearable jewellery.

About Ogden of Harrogate

Ogden of Harrogate began in 1893, when James Roberts Ogden opened Ogden’s Little Diamond Shop in Harrogate. James R. Ogden, who had a passion for archaeology and anthropology, was the advising goldsmith to the British Museum and assistied the renowned archaeologists of the day, including Leonard Woolley and Howard Carter.

One of his more notable tasks was to value and test the gold work found in Tutankhamun’s tomb.

The company is now in its fifth generation of the family, run by Robert Ogden and Ben Ogden FGA. Visit www.ogdenharrogate.co.uk