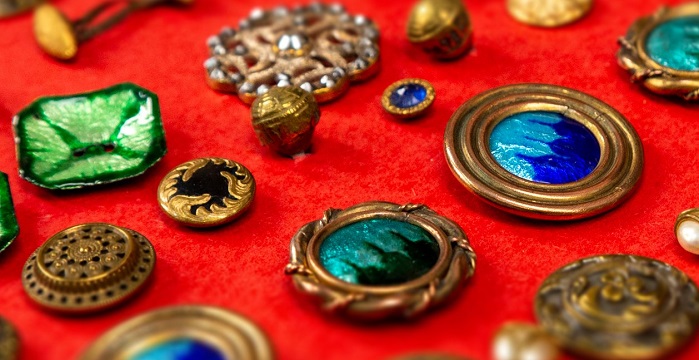 A single-owner collection of 12,000 antique buttons could make thousands in a Derbyshire saleroom, with interest from around the world.

The collection of buttons, made from everything from gold and silver to nuts, was gathered by Rebecca Lloyd Marlow over the course of more than 20 years. It will go under the hammer at Hansons Auctioneers’ Spring Fine Art Auction on April 5 and could make more than £14,000.

Mrs Lloyd Marlow, who originates from Nottinghamshire but now lives in France, has decided the time has come to part with her treasured collection of more than 12,000 buttons, which has dazzled experts at Derbyshire’s Hansons Auctioneers.

Valuer Victoria Sheppard, who has been cataloguing the items, said: “It’s quite extraordinary. The buttons are exquisite, almost jewel-like. They shimmer in every colour, design and material imaginable.

“This is no ordinary collection, it is a connoisseur’s collection that will appeal to everyone. Buying just one of these buttons could generate a whole host of new button collectors around the world.

“Mrs Lloyd Marlow must be a world expert on buttons. She knows every one of her buttons and has listed each one. The experts at Hansons have been amazed by them.”

The buttons, which date from the 18th century to the mid-20th century, come in 18 categories including ceramics, horn, brass, Bakelite, glass, silver, diamante, steel, gold, enamel and rare vegetable ivory – or nuts.

Mrs Sheppard said: “The nuts of the Taqua palm, which grew in the rainforests of Peru in South America, were used as ballast in ships in the early 19th century. In 1859 an Austrian wood carver called Johann Hille was the first person to use the nuts to carve buttons and then hand colour them. It’s possibly the largest collection of early vegetable ivory buttons in the world.

“There are some exceptional Art Deco buttons and the ultimate set is a collection of 19th century buttons and studs including horn, enamel, cut steels, diamante and gilt. Designs include three red horn buttons inlaid with a mosaic of mother of pearl, plus floral and Art Nouveau creations. Makers such as Henri Hamm, Albert Patent of Paris to name but a few stand out.”

Mrs Lloyd Marlow, who describes her hobby as a ‘button fetish’ said: “My roots are in Nottingham and the East Midlands and my background is in antique and vintage costume and textiles. This led to my fascination with buttons.

“The collection began more than 20 years ago when I relocated to France and has been trawled from the many markets, fairs and brocantes (second-hand shops) I came across in Paris down to the south of France.

“I am absolutely fascinated by the infinite variability and varieties of style, design, colours, shapes and manufacturing techniques used in their production – now long since discontinued.

“This collection will interest to a wide audience including serious button collectors, designers, artists and craft enthusiasts. It’s also an inspirational archive source for manufacturers and producers.

“At the age of 70, I feel it’s time to say au revoir to my passion. I hope my button collection will kindle new interest in this fascinating collecting area.”

The Button Collection is due to be sold on April 5 in Hansons Spring Fine Art Auction.