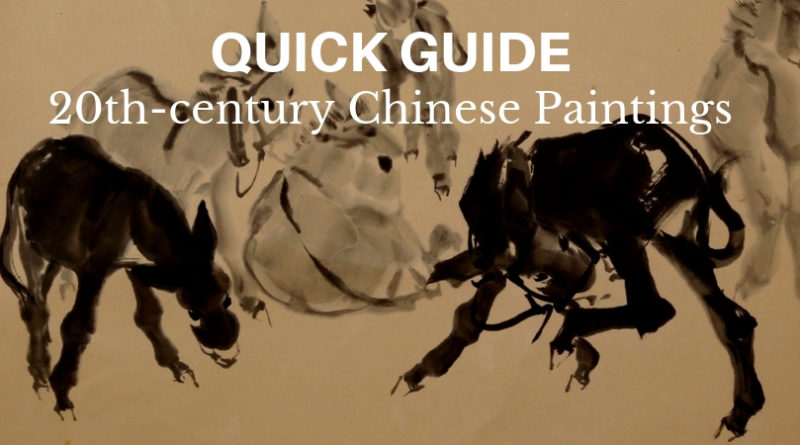 There are many 20th-century Chinese paintings circulating in the UK and beyond, but the difficulty lies in distinguishing those worth tens of thousands of pounds from those worth less than a hundred. The best first step, when analysing a painting created in the last century, is to familiarise yourself with the style and characteristics of the great masters of modern Chinese ink paintings.

Just as Western art is defined by the likes of Picasso, Matisse and Van Gogh, so too has Chinese art had its modernisers, who transformed the centuries-old traditional and academic forms by introducing new ideas and personalised expression.

While the greatest artists are little known in the West, their status in China is every bit as important as their Western counterparts. In fact today global sales of the top 20th-century Chinese paintings by celebrated artists rival those of their Western contemporaries.

There are perhaps 50 modern Chinese painters who, through the medium of ink and colour on paper, might be regarded as truly great. Here is a selection of five leading exponents whose works can command thousands.

Also known as Pu Xinyu, was the cousin of the last emperor Pu Yi. He lived through most of the Republican era (1912-1949) but emigrated to Taiwan in 1947. He spent 10 years in solitude to perfect his skills, nicknaming himself ‘Hermit of the Western Mountain’. His work often reflects a poignant swan song to a bygone era. The picture (below) is typical of his landscape paintings.

Qi Baishi was the most famous for painting small details of nature – still life scenes, shrimps playing in a pond or jumping groups of frogs. His work is characterised by strong and expressive brushwork and alongside being a painter and calligrapher, he carved his own seals, which are impressed on his works in red seal paste. Qi’s humble beginnings meant his background was consistent with Communist ideals meaning that he was promoted as one of China’s foremost artists by the State throughout the second half of the 20th Century. His mature style developed after he was 60 years old, and this piece is typical of his later period.

Binhong was an important painter of landscapes who worked within traditional forms by introducing modern and innovative techniques. He was also a noted connoisseur of paintings. The present work encapsulates his typical brushwork.

Zhang Daqian was a prolific and great artist who painted in a range of styles, from traditional landscapes to abstract expressionism towards the end of his life.

He studied the Dunhuang cave paintings during his early life and emigrated to Brazil in 1949, moving to Taiwan in 1978.

Zhang was a great showman who famously met Picasso in 1956. He also continues to cause controversy as he was a great forger and his works still populate museums and puzzle curators around the world.

In comparison to his canon the present work is relatively minor. It nevertheless encapsulates something of the great artist’s style and skill.

Zhou was from a later generation than the other artists mentioned and, perhaps as a result, his work shows more of the hallmarks of Soviet Realism, which gained influence on Chinese art during the 1950s. He is most famous for his depiction of donkeys and so this piece is typical of his work.

If you have stumbled on an attic find, or spotted a scroll in a saleroom, how do you know its worth? Ask yourself…

Is it a print?

Surprisingly many of the works assumed to be by famous artists are actually prints. During the 1960s and 1970s, a company called Rong Bao Zhai produced woodblock prints of works by famous artists. The most commonly reproduced artist was Qi Baishi.

Complete volumes of woodblocks from this time can fetch around £1,000, however, individual leaves have a negligible value.

Does it strike you as an important work?

China has a tradition of copying, with artists learning by reproducing the works of the masters. While some copies are very good, others vary widely from the original. The great masters of the 20th century spent decades perfecting their technique, ensuring every stroke is well judged and thought out.

Look at each stroke, the overall composition and the placement of different layers of ink. Is this a piece that really looks like it came directly from the hand of a great artist?

Did you pay the correct price?

Inheriting or having been given a painting is a different matter from purchasing it on the open market. If you have bought a work at a significantly reduced price, the chances are that it is not correct. Be careful of the attributions made in Western auction houses which may be guess work, rather than considered judgement. The works of the artists mentioned in this piece will almost always attract five-figure sums. If a purchase seems too good to be true, it probably is.

What is the artwork’s provenance?

Establishing the journey that an artwork has undertaken is an important means of assessing its authenticity. There are several channels through which 20th-century works found their way into Western collections. They may have been acquired during a delegation to China, through diplomatic channels, on a business trip to Hong Kong, or from a reputable dealer or auction house. It is important to do as much detective work as possible in a market where provenance is a key consideration for buyers.

What information does the inscription hold?

The next stage is to interrogate the inscriptions and seals (this might require a bit of help if you don’t read Chinese). Typically, the red seals will either belong to the artist or subsequent collectors of the work. Inscriptions often include the artist’s signature, the date, the place of creation and possibly a dedication. All these can be used to build up a coherent picture of the painting.