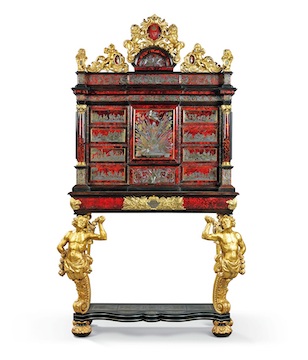 A collection of sumptuous items that once belonged to one of the world’s most prominent families is to go under the hammer this summer, with prices ranging up to £2.5 million.

European furniture and artworks from the Rothschild banking family will be sold at Christie’s in London.

Comprising some 57 lots, each with exceptional provenance, the pieces were collected by members of the Rothschilds, particularly Baron Gustav de Rothschild (1829-1911), and were formerly housed in some of the family’s magnificent residences.

Christie’s said that the sale captures the spirit of the opulent le goût Rothschild – the celebrated aesthetic that has influenced many European and American interiors since the 19th century – which follows the tradition of collecting at European Royal courts during the Renaissance, Baroque and Enlightenment periods.

Charles Cator, Deputy Chairman, Christie’s International, said, “The Rothschild name is synonymous with collecting at the very highest level, with many of the world’s greatest works of art having a Rothschild provenance. Their fabled name is added to the extraordinary roll call of illustrious owners of these masterpieces, so many of them Royal, from Louis XV and Marie Antoinette to William Beckford and Prince Demidoff.

“This sale is a celebration of connoisseurship and passionate collecting and we are very proud to have been entrusted with these masterpieces. With the great resonance of the Rothschild provenance among collectors and institutions this is an unparalleled opportunity, which marks a very special high point in my long career at Christie’s. It is thrilling to have the privilege of handling these supreme works.”

Highlights from the sale include:

The top lot of the sale, a pair of royal Flemish tortoiseshell, brass and pewter inlaid marquetry and giltwood cabinets, was commissioned in Antwerp circa 1713 for Philip V King of Spain, the second son of the Grand Dauphin and grandson of Louis XIV. The pair of cabinets carry an estimate of £1.5 – 2.5 million.

This highly important pair of cabinets on stand, inlaid with superb and precious marquetry panels in tortoiseshell and engraved metals, belongs to a group of four cabinets originally commissioned for Philip V King of Spain from the workshop of the celebrated Antwerp furniture-maker and dealer Henrick Van Soest (1659-after 1726), one of the most prestigious cabinet-makers of Flanders who worked in the great tradition of Netherlandish marquetry furniture. 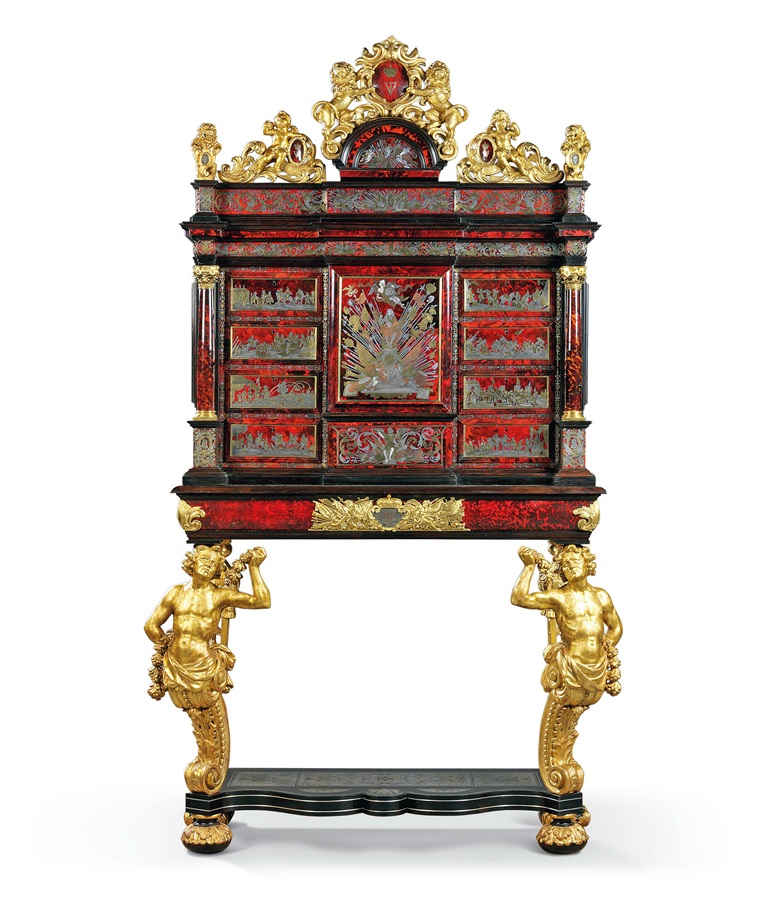 A set of ten parcel-gilt polychrome square enamel plaques by Leonard Limousin, circa 1550, each depicting an apostle in a circular wreath and with an identifying banner, have an estimate of £200,000 to £300,000. Also acquired by Baron Gustave de Rothschild, ‘The Rothschild Apostles’ exemplify Limousin’s finest creations in his clear sense of colour and the lively and original compositions. Two of the plaques, of Saint Andrew and Saint Bartholomew, are signed ‘LL’. These plaques formed part of a larger set of sibyls, prophets and saints that adorned the antependium of an altar in the now-lost church of Santa Maria della Celestia in Venice. A number of the other plaques from the antependium, and also a liturgical lamp that hung above the altar, remained in the Rothschild family until recently; one is in the Correr Museum in Venice. 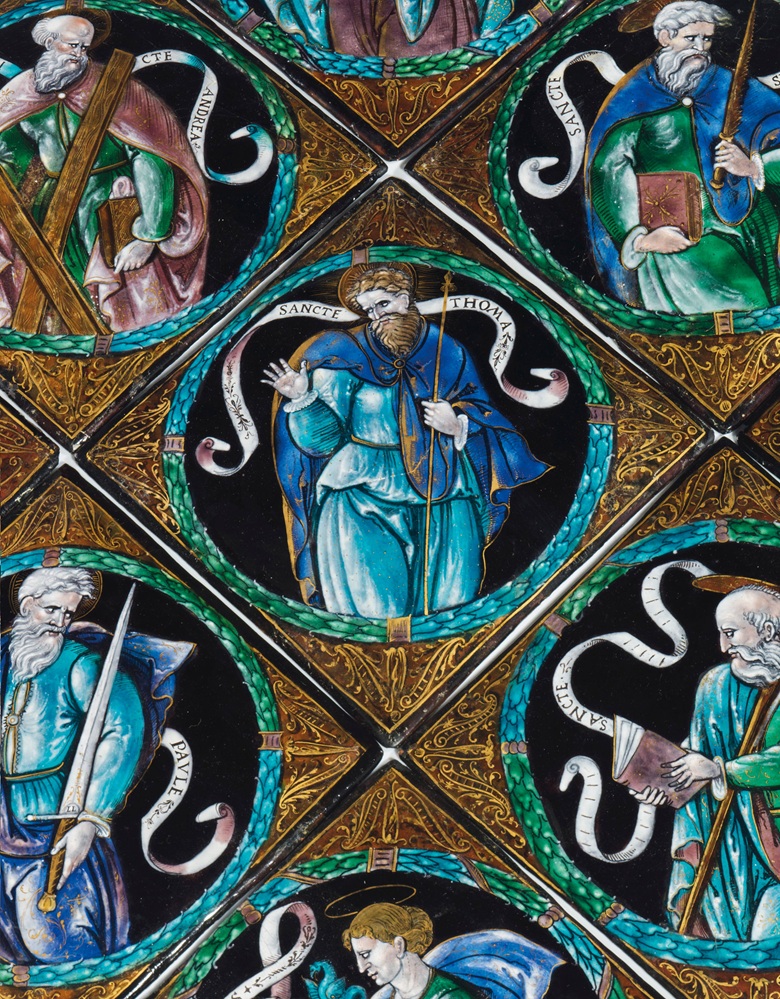 A Venetian rectangular parcel-gilt, gilt-bronze and rock crystal casket, circa 1600 belonged to the renowned collector and author William Beckford in the early 19th century (estimate: £100,000- 150,000, illustrated left). With the precious use of rock crystal and Islamic-inspired lacquer decoration it is obvious why it would have appealed to Beckford. When this casket was sold in the celebrated Fonthill Abbey sale of 1823, it was said to have come from the collection of Pope Paul V Borghese, who could have commissioned it himself. The casket was purchased at the Fonthill sale by an agent on behalf of the 2nd Earl Grosvenor. 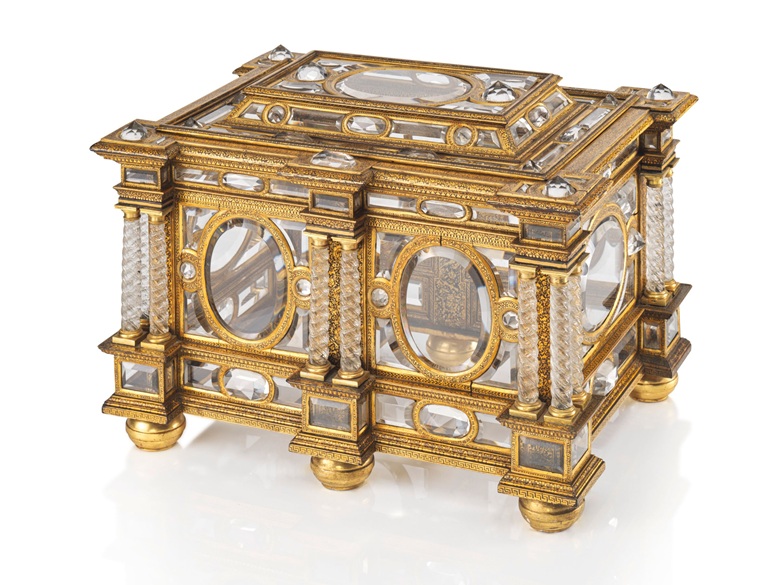 Elsewhere in the sale, other standout lots include:

Commissioned by Queen Marie Antoinette of France almost certainly for her Petit Trianon, a Louis XVI ormolu-mounted mahogany table à écrire, circa 1780, is by Jean-Henri Riesener, the Queen’s favoured cabinet-maker (estimate: £600,000-1,000,000). Notably, the table is marked with Marie Antoinette’s garde-meuble brand which was applied to her personal furniture after 1784.

Traditionally from the Spanish Royal family, and part of a very small group of luxurious 18th furniture incorporating Sèvres porcelain plaques is a Louis XVI ormolu, Sèvres porcelain and marquetry guéridon, circa 1782-83, by one of the most famous ébénistes of the late 18th century, Martin Carlin (estimate: £400,000-600,000).

In the Old Masters section of the sale, David Teniers’ lively and brilliantly observed The Ham Dinner was painted in 1648, when the artist was at the height of his powers. It carries an estimate of £800,000-1.2 million).

Executed on an impressively large copper plate, allowing for a high degree of finish, it is an excellent example of the tavern scene genre that Teniers developed and excelled in. The painting has exceptional provenance, having been in the collection of Charles Ferdinand, Duke of Berry (1778-1820), son of the future King Charles X of France, and later belonging to Count Anatoly Nikolaievich Demidov, 1st Prince of San Donato (1813-1870), a Russian industrialist and one of the most significant collectors of his day.

A further Old Masters highlight is Jean-Honoré Fragonard’s dynamically designed, vibrantly coloured and masterfully executed Dans les blés, which is a masterpiece of the artist’s full maturity (estimate: £700,000-1 million). It is an outstanding example of the artist’s intimate, small-scale ‘boudoir’ pictures, that are recognised as his most original and lasting contribution to the history of art.