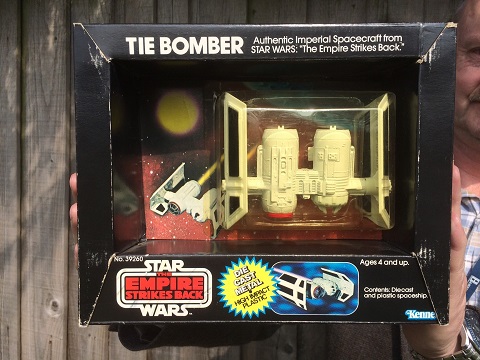 A Derbyshire auction house says that they have had strong interest in 90 Star Wars toys related to the film franchise set to sell next week.

A large mixture of vintage Star Wars toys will go under the hammer at Hansons Auctioneers’ June 20 toy sale in Derbyshire – and the top lots are already exceeding estimates.

For example, a 1980 Palitoy Star Wars The Empire Strikes Back, Boba Fett, figure has reached more than £600 from a low estimate of £300.

Hansons’ toy valuer Steve Fulford said, “We’re expecting this Star Wars collection to skyrocket. There is massive demand for Star Wars memorabilia from fans around the world and the Midlands is a brilliant hunting ground to find them because the Palitoy factory, which once made the toys, was based in Coalville, Leicestershire.

“Some toys belong to people who used to work at Palitoy. Luckily for them, the worldwide popularity of Star Wars is so huge a toy that cost less than £1.59 in the 1980s can be worth serious money. For example, a 1983 Barada figure is priced £1.59 on the packaging but carries an estimate of £80-£120.

Meanwhile, a Tie Bomber ‘Authentic Imperial Spacecraft’ from The Empire Strikes Back, unearthed from a Leicestershire loft after nearly 40 years, has an estimate of £200-£300.

Mr Fulford said, “The Tie Bomber is the rarest of the die cast Stars Wars toys and few have survived in their sealed boxes. It was only released in America in relatively small numbers. The spacecraft appeared for a few seconds in The Empire Strikes Back and it’s thought its minor role in the film led to poor sales and the cancellation of the product in 1981.”

The 77-year-old owner of the Tie Bomber, from Coalville, Leicestershire, who didn’t wish to be named, said: “I was a clerical worker at Palitoy for 12 years from 1983 to 1995 and, from time to time, surplus stock was sold to staff. I assume this toy was sent from America to test whether it would sell in the UK.

“My son used to like Star Wars and I often bought toys home for him. For some reason, this one was never opened. If I bought it in 1983 it’s been in my loft for 36 years.”