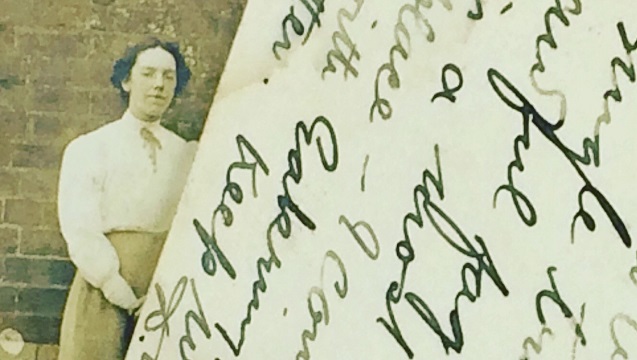 A postcard penned by DH Lawrence to a young Nottinghamshire woman has been saved from a rubbish skip and is set to sell in a Derbyshire sale later this month. 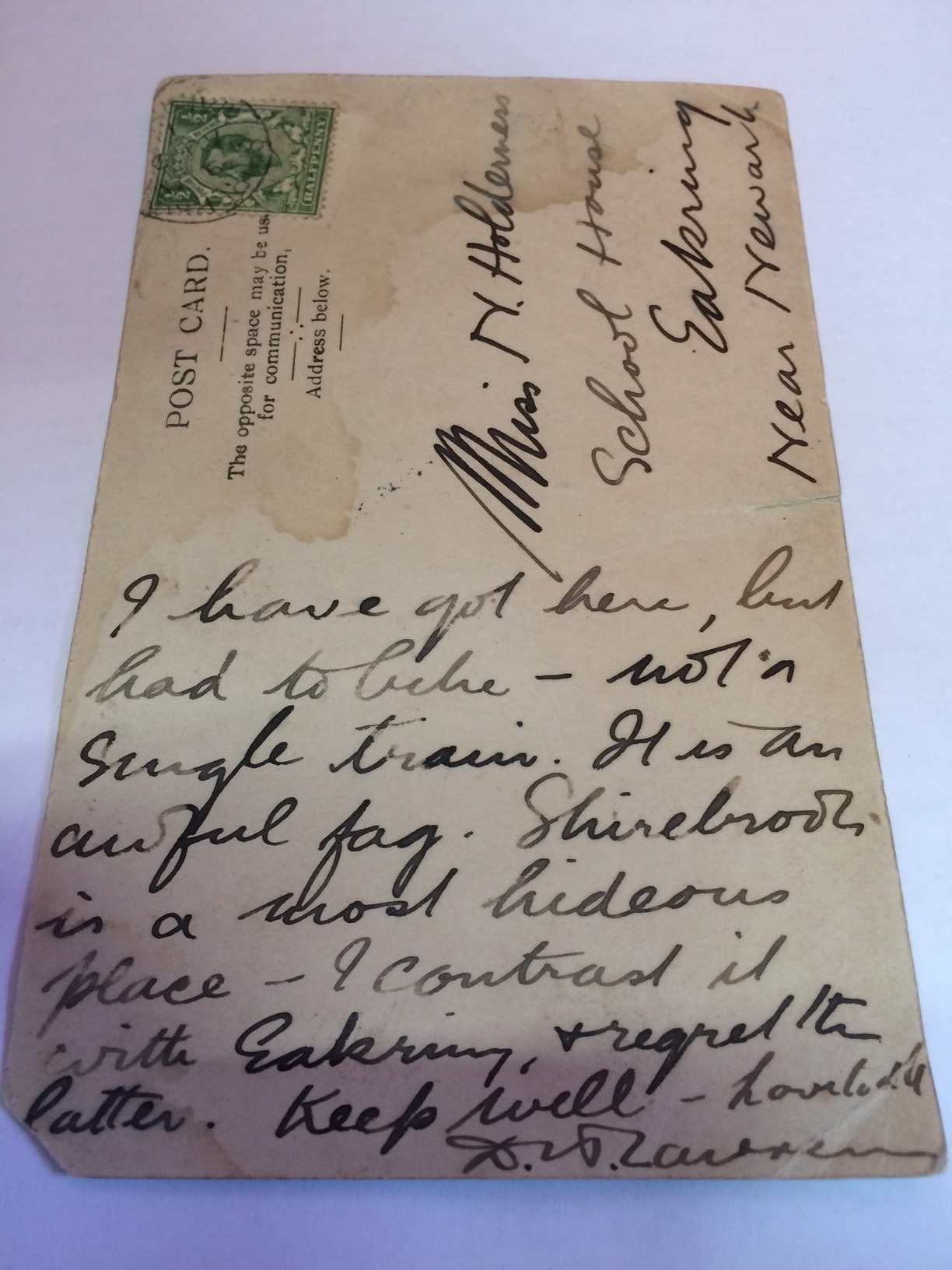 The postcard was written more than 100 years ago by the author of Lady Chatterley’s Lover and Women in Love, to one of the great aunts of the current owner, Mrs Patricia Endean-Rowe, 71, a retired teacher, from Eakring, Nottinghamshire.

It reveals the celebrated writer’s somewhat negative observations of the town of Shirebrook in north Derbyshire, describing it as “hideous”. On the front of the card is a photograph of Old School House and Rock Cottages.

The handwritten and signed postcard was sent to Miss Nellie Holderness, School House, Eakring, near Newark, around 1911 – and reveals a long-forgotten friendship with the Nottinghamshire family.

The four Holderness sisters, Nellie (Ellen Mary), Mabel, Elsie and Kitty, became acquainted with David Herbert Lawrence as Kitty was at teacher training college with him in Ilkeston, Derbyshire. Their father, George Holderness, was a schoolmaster in Eastwood, Notts, where Lawrence was born. 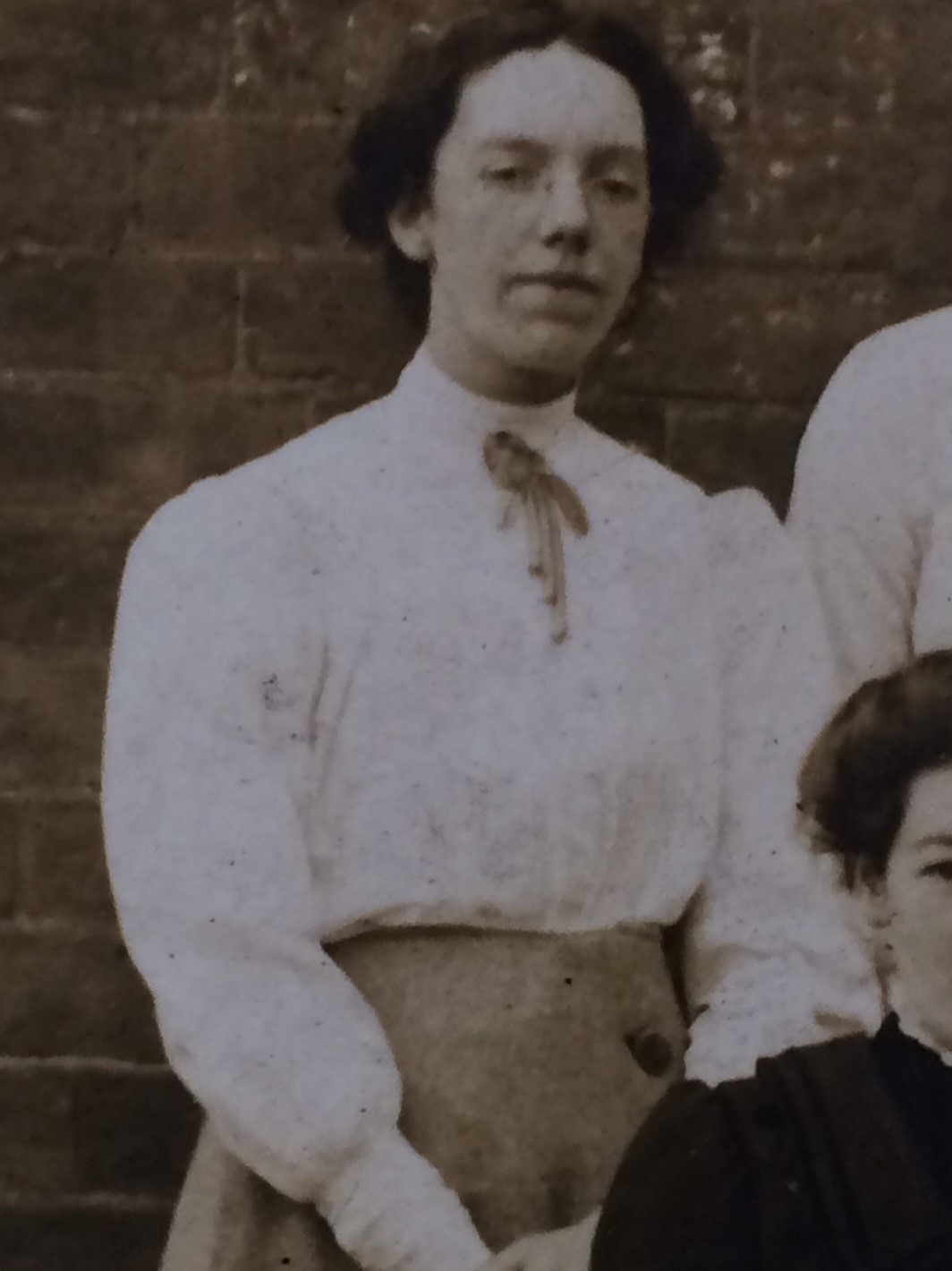 Lawrence wrote to Nellie: ‘I have got here but had to bike – not a single train. It is an awful fag. Shirebrook is a most hideous place – I contrast it with Eakring. Keep well – love to all – D H Lawrence’.

Mrs Endean-Rowes said, , 71, a retired teacher, from Eakring, Nottinghamshire, said: “It was literally saved at the tip four years ago. Our family always knew about the card but thought it’d been lost years ago. My late mother, Ella Walker, couldn’t remember where she’d put it.

“After she passed away, we had to clear her bungalow. A relative was about to throw a plastic box into a skip at Bilsthorpe tip but, just before he did, gave it a shake – and realised something was inside. It was the D H Lawrence postcard sent to one of my great aunts more than a century ago.”

Jim Spencer, books expert and associate director at Hansons, said: “This is a wonderful find. Lawrence is one of England’s most famous literary figures whose work created much controversy when first published. His impact is still felt today and some of his books, such as Lady Chatterley’s Lover, have been adapted for film and television.