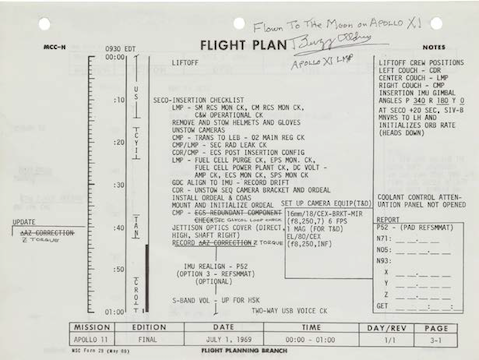 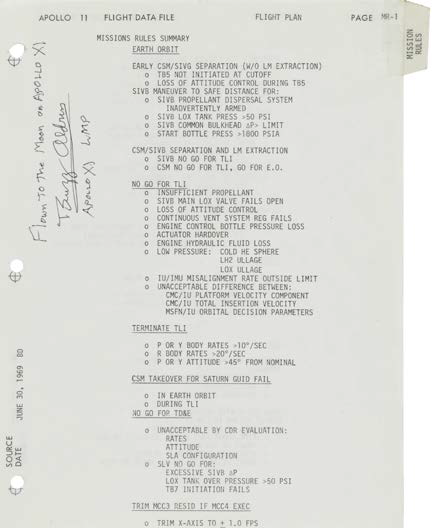 Pages from Buzz Aldrin’s flight instruction manuals for the Moon landings are set to be some of the leading lots in Sotheby’s Space Exploration sale taking place on the 50th anniversary of the lunar landing this weekend.

A total of 11 items have been consigned to the sale by Buzz Aldrin, with the top lots a selection of pages from the Flown Apollo 11 Flight Plan and Flown Apollo 11 Data File. These manuals were used by the three astronauts as guides during their historic expedition.

Each such sheet is signed and inscribed by Aldrin and accompanied by a letter of authenticity.

Buzz Aldrin commented, “Our mission was a mission for all of mankind. It’s been an honor to look after these documents for the last 50 years, which bore witness to that historic event. As we look forward to the landmark anniversary, I decided that it was time to share them with a new generation of collectors, who can enjoy them for the next 50 years and beyond.”

Cassandra Hatton, Vice President & Senior Specialist in Sotheby’s Books & Manuscripts Department, said: “We are very proud to say that with this auction, we are working directly with several of the astronauts who risked their lives in the pursuit of President John F. Kennedy’s ambitious and dramatic goal of sending a man to the moon, and we are especially honored to be the only auction house offering items directly from Buzz Aldrin.

She continued, “Buzz has held on to the most important pages from the Flown Flight Plan and Flown Data File, and it is truly a privilege to be entrusted with these pieces from his treasured personal collection. Furthermore, in an amazing alignment of the stars, three documents from Buzz’s collection happen to correspond directly to other items from other consignors – when examined together, they provide us with a much deeper understanding of the objects and of the mission itself.”

One of the most crucial and potentially life-saving documents aboard the Command Module “Columbia” was the four-page “Mission Rules Summary” from the Flown Apollo 11 Data File, which detailed the steps to be followed in the event of a spacecraft malfunction, carrying an estimate of £24,000 to £40,000 ($30,000 to $50,000).

Also included in Aldrin’s collection are both the first and the last pages of the Flown Apollo 11 Flight Plan.

Beginning with the words “LIFTOFF”, the first page details the crucial timeline of tasks to be performed by the crew from the launch through the first two hours of the lunar voyage from moment 0:00, after Mission Control launched the crew into space by the Saturn V Rocket. It has an estimate of £24,000 to £40,000($30,000 to $50,000). 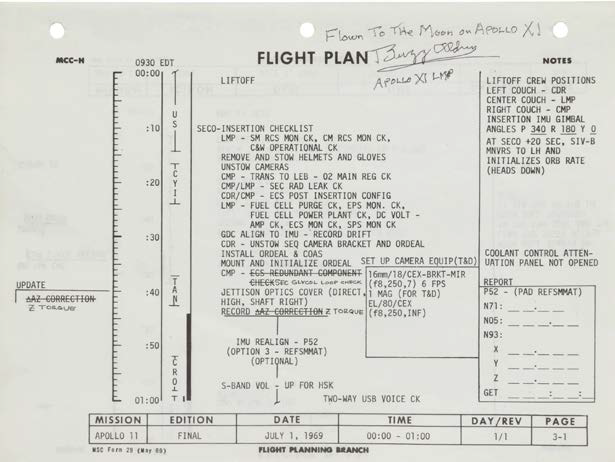 The final page of the Flown Apollo 11 Flight Plan outlines the timeline of activities to be performed during the final two hours of the mission including jettisoning the Service Module, and re-entry into Earth’s atmosphere, travelling at a speed of 36,000 feet per second, before finally splashing down in the Pacific Ocean, where the crew and the Command Module “Columbia” were recovered by the USS Hornet. It has an estimate of £20,000 to £28,000 ($25,000 to $35,000). The final step on the timeline reads “SPLASHDOWN”, marking the moment when the Apollo 11 crew returned alive, thus successfully completing their mission and fulfilling the goal set by President Kennedy of “landing a man on the moon and returning him safely to the Earth.” 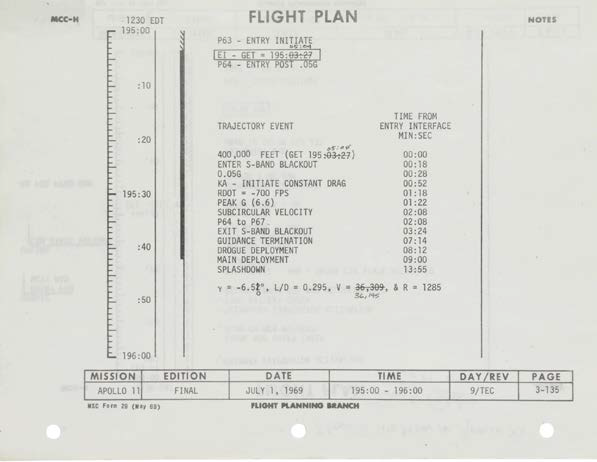 Creating a visual record of their mission was an essential task for the Apollo 11 crew and with thorough and detailed photography they were able to capture lasting documentation of this momentous achievement. To accomplish this, the astronauts followed the “Photographic Timeline” from the Flown Apollo 11 Data File. It carries an estimate of £12,000 to £16,000 ($15,000 to $20,000). The timeline contains details on what activities to photograph and when, as well as instructions for which camera and film magazines to use. Images captured by the cameras include: Earth and lunar photography, the lunar descent, panoramic shots from the LM window, EVA Crew activities including their famous moonwalk, lunar mapping photography, rendezvous, and more. 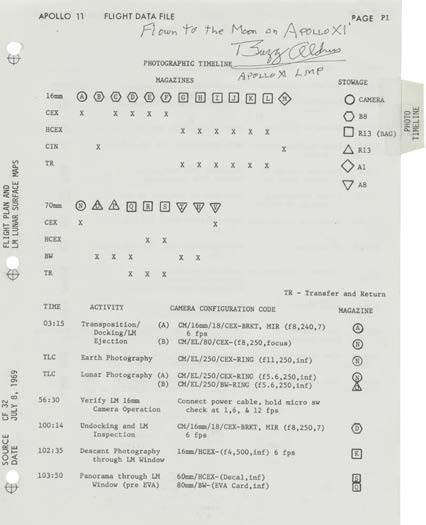