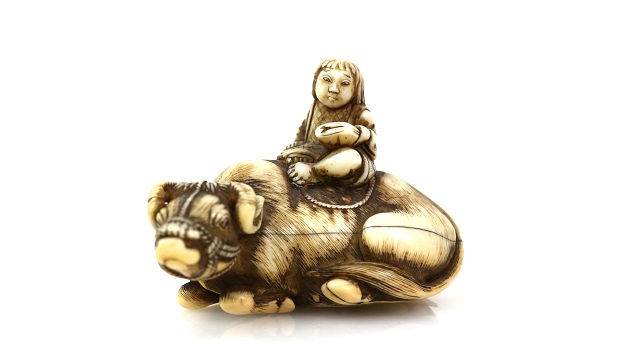 A raft of intriguing Japanese artworks will go under the hammer in a Surrey auction house next month as part of its three-day autumn sale.

Ewbank’s Japanese artworks auction will offer a large collection of both netsuke and okimono, highlighting objects that were intended for both the domestic market, and for the export market to Europe.

James Hammond, an expert in Asian art who joined the team at Ewbank’s in May of this year, commented: “One of the significant challenges when studying the art of Japan is the sheer diversity of material that Japanese Artists have worked with over the last thousand years.”

He continued, “Artisans and masters from the techniques of lacquer, wood, paper, enamel, metal, ink, textile and ceramic fill Japan’s art traditions, producing huge numbers of masterpieces in each genre.”

Netsuke were used by all sections of Japanese society as toggles by which small boxes, purses and tobacco pouches could be hung from the waist. Okimono is the term used to describe ornaments or objet d’arte, for collection.

Hamond explained: “In a world where Western style jewellery was unknown, these Japanese artworks were significant fashion accessories. Although Netsuke were, and indeed remain, a largely provincial folk art by many Japanese Collectors, Europeans invested enthusiastically in them. Okimono, by contrast, were intended for western markets only.”

A large variety of netsuke in many different forms fill up the Ewbank’s auction, illustrating many of Japan’s legends, stories and customs.

There is the famous poetess, Ono no Komachi, who has lost her beauty, Dutchmen from Nagasaki Bay, Chinese Scholars, and the beautiful Tokiwa Gozen on her tragic  winter journey to Uta in 1160. Some compositions show the sheer originality of Japan’s aesthetic; the Badger Tea Kettle and the story of Kiyohime are notable.

Kiyohime is a terrifying story of a girl scorned by a holy monk from the Monastery of Dojoji; a sort of ancient Japanese version of Fatal Attraction, but with far more dramatic consequences. The netsuke is an unforgettable portrayal of this unhappy story.

“Looking through these small masterpieces of sculpture, one can understand how Kurosawa came to compose his film making. The Tokiwa Gozen netsuke shows her carrying her three sons, one of whom will grow to become Minamoto Yoshitsune, the most famous of all famous Samurai, but you sense, rightly, that there will be many broken hearts as the process unfolds,” said Hammond.

Perhaps, the most valuable netsuke depicts a scholar reading on the back of a recumbent water buffalo. This sculpture by the Master netsuke artist, Kyoto Masanao, dates from about 1780-90 and is estimated at between £20,000 and £30,000.

The subject is uncertain but may have been intended as the Daoist, Lao Tsze. It is a very serious toggle for any collector, but one wonders whether it was actually ever worn as such. It perhaps once belonged to a senior Samurai before the netsuke fashion disappeared with the process of Japan embracing the dress styles of 19th-century Western Europe and America.

Other sculptural pieces in the sale, reflect day to day life in Japan. A finely carved netsuke of a man apply moxa to his aching legs, carved by Yoshinaga, estimated between £2,500 and £3,000, illustrates the medicinal process of burning mugwort to assist the fluidity of the joints and internal systems.

Whilst traditional medical practice was known to most Japanese, foreigners were not, and throughout a majority of the Edo Period, it was only the Dutch who were allowed on Japanese soil. Traders from the Netherlands were confined to Deshima Island in Nagasaki Bay, and perhaps this is the reason why so few netsuke illustrate these famous sea-farers.

One very elegant netsuke of a Dutch Trader, in a big hat, bending over to pick up a chicken is both a charming composition, and a rare moment in Edo period society. It has a pre-sale guide price of between £1,500 and £2,000.