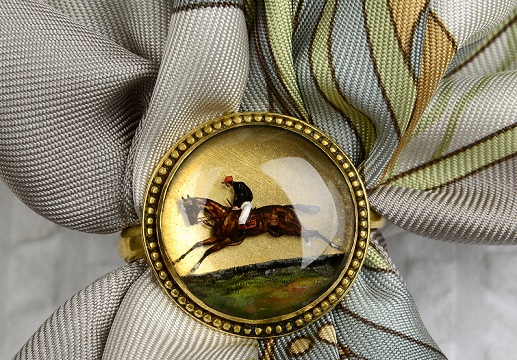 An unusual mid-Victorian scarf ring depicting a former prime minister’s horse’s victory in a race, found sitting in a jar of buttons, is set to sell in a Birmingham saleroom this month. 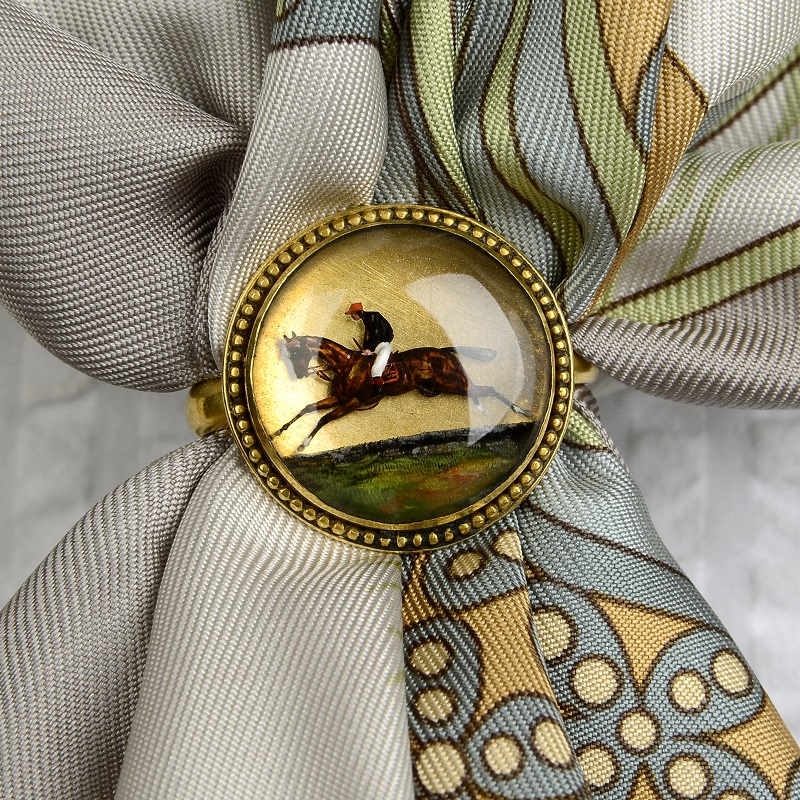 The gold reverse carved and painted ring commemorates the racehorse Lord Lyon’s victories. Lord Lyon was owned by Richard Sutton and later Archibald Primrose, 5th Earl of Rosebery in the mid-19th century. The beautiful scarf ring displays the horse with one of its former jockeys, and has inscriptions detailing its successes on the back.

The scarf ring was kept in a jar for many years in the Dorset village of Bourton. This was close to the family of Richard Sutton, who owned Lord Lyon in 1866.

Under the leased ownership of Sutton, the stallion became the third ever horse to win the English Triple Crown race – following his victories at the 1866 Epsom Derby, the Two Thousand Guineas Stakes and the St. Leger Stakes. The engraving to the reverse of the item reads ‘Lord Lyon. Winner. Two Thousand, Derby & St Leger. 1866’. In 1876, the stallion was sold to the 5th Earl of Rosebery, who served as prime minister of the United Kingdom from March 1894 to June 1895.

The 5th Earl of Rosebery had a keen hobby in horse racing, and he bought the horse for £4,500 – relocating Lord Lyon to his Crafton Stud in Crafton, Buckinghamshire. The Earl owned Lord Lyon until 1880, until the stallion stopped competing in horse racing.

Lord Lyon then resided in Yorkshire until he was euthanised at age 24 in 1887. The 5th Earl of Rosebery went on to succeed William Gladstone as prime minister in 1894 until his resignation to the queen just over one year later resulted in the end of his term.

Alex Duffy, Jewellery Specialist at Fellows Auctioneers, said, “We are very excited to offer a special piece of racing history in our November Fine auction. The provenance really makes this an interesting and stand-out item, with the impressive achievements of the stallion engraved to the reverse. Collectors of reverse-carved intaglio will have a rare opportunity to add a unique piece to their collection.”

The sale takes place on November 14.