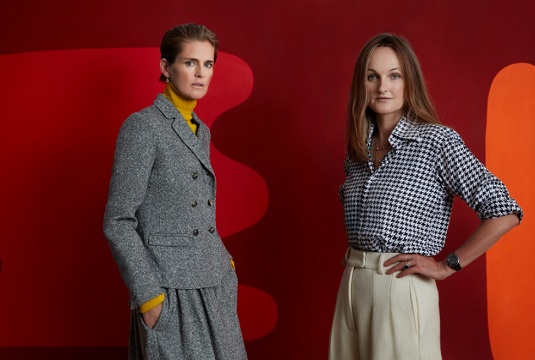 A collaborative exhibition by Sotheby’s and country sports clothing retailer Holland & Holland will showcase pioneering artworks by Modern British artists, each hand-picked by the creative duo behind the brand, Isabella Cawdor and Stella Tennant.

The exhibition will celebrate the best of British creativity, by exploring the shared aesthetic of the traditional brand and many British artists of the 20th century, who combined tradition and heritage with a commitment to modernity.

Among the artworks to be showcased are pieces by Peter Lanyon, Ben Nicholson, Ivon Hitchens, John Piper, Patrick Heron and Barbara Hepworth, which illuminate the play between landscape and abstraction, natural forms and the formal language of painting with muted and pure colour palettes –encapsulating the defining aspects of British art from the period, from the Neo-Romantics of the 1940s to the St Ives School of the 1950s and 60s.

The works will then be offered at auction as part of Sotheby’s Modern & Post-War British Art sales on November 19 to 20.

Speaking about the collaboration, Stella Tennant said, “The DNA of Holland and Holland is very much rooted in the British countryside –  every collection starts with the environment, the weather and the landscape. This notion of working with the landscape is one that  resonates strongly with Modern British art. I love seeing how these painters took a modern approach to such quintessentially British subject matter, starting with something figurative and then finding purity in abstraction – this outlook is something we aspire to.”

Isabella Cawdor added, “I have been fortunate enough to be surrounded by art all of my life, and it has always been a real inspiration – an exhibition can really set the mind on fire and open up entirely new ways of seeing – and my lookbooks are littered with paintings and sculptures. It is thrilling to see these synergies come to life in an exhibition of artworks alongside the clothes.”

Speaking ahead of the exhibition opening, Simon Hucker, Sotheby’s Modern British Art Specialist, said, “For me, there is a very natural affinity between Isabella and Stella’s aesthetic and that of a number of British artists of the 20th century, from the colours they use – those
deep greens, slate blues and russet reds that are instantly evocative of this wind-swept, rain-soaked land – through to their interest in texture and irregular pattern and the distinct physical quality of materials. It is great to see these modern artworks showing alongside contemporary designs – it speaks of their timelessness, as well as their roots in the experience and physical nature of the British landscape.”