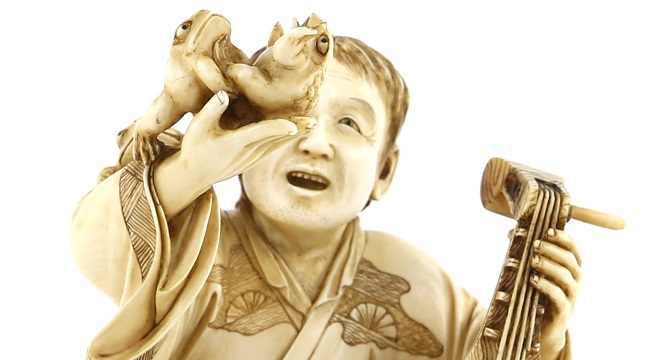 A stunning collection of netsuke and okimono will go under the hammer in Surrey today, with estimates slashed after auction house Ewbank’s accepted consignment under special conditions to reflect risk.

It shows how the prospect of much stricter regulations on the sale of ivory have now started to have a major impact at auction.

Well aware that this could be the case when he accepted a distinguished collection of okimono and netsuke for his Japanese & Asian works of art sale in September, Chris Ewbank took the consignment of hundreds of pieces on the basis that he would be able to re-offer them at much-reduced estimates if they failed to sell.

“The collection includes notable pieces, the best of which would have ordinarily commanded a decent five-figure sum, but the looming change in the law decimated sell-through rates, leaving hundreds unsold,” he said.

“Ivory okimono were particularly badly affected, while netsuke fared somewhat better, but when you consider the quality of what was on offer, the prospect of never being able to sell these pieces on in future was clearly the dominating factor at play.”

Now specialist James Hammond has re-catalogued the offering for the Asian Art sale on November 7 with estimates at less than a quarter of what they were in September.

“It’s a disappointing outcome for the consignor, but the cause of this downturn is clearly out of our hands,” said Mr Ewbank. “However, having alerted the consignor right at the beginning that this might be the case, this was not a shock for them and we are now able to go ahead with a second offering, with revised estimates, which will make these pieces attractive purely on a collectable basis, without consideration of resale value.

“On the plus side, this is a rare opportunity for potential buyers who have always wanted to own an exceptional piece of carving of this type. However, while we share the sentiments of those who wish to protect the future of the African elephant population, we must also acknowledge the pretty devastating effect this can have on the cultural heritage of a nation like Japan.”

Some of the highlights of the sale include: