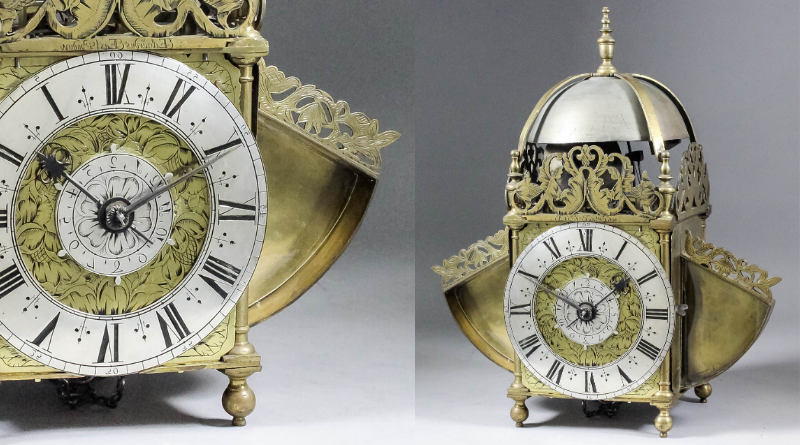 Examples of rare, early clocks by some of London’s best known makers will be offered in a Kent auction taking place later this month. 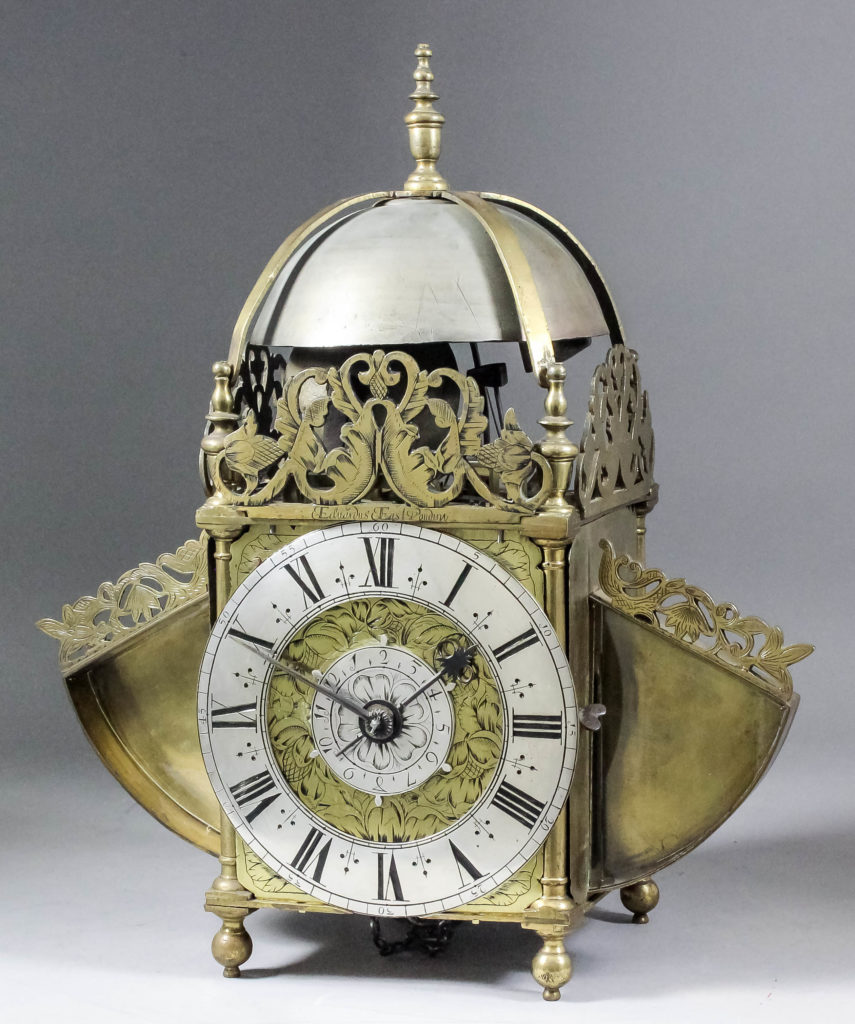 One of the most notable 17th-century clocks offered in the sale at The Canterbury Auction Galleries is a lantern clock by the clockmaker Edward East, formerly in the collection of Viscount Hereford. East (1602–1696) was watch and clockmaker to Charles I, and a quarter striking winged lantern clock, the front fret engraved “Eduardus East Londini“, is estimated at £8,000-12,000 in the sale.

The clock has a 6.5ins diameter silvered chapter ring with Roman and Arabic numerals and two steel hands, the centre silver alarm disc engraved with a Tudor rose, while the brass dial is engraved with tulips and leafage.

The verge movement with later anchor-shaped bob pendulum has a three-train quarter striking movement with alarum striking on two bells, the whole powered by four brass-cased weights, while the brass case has turned uprights and finials, a heavy silvered metal bell and three cast frets. Later glazed winged apertures to the side doors have pierced and engraved crestings.

East was born in 1602 and apprenticed to Richard Rogers in 1618. He was elected Master of the Clockmakers’ Company in 1645 and 1652 and died in 1696. The Edward East lantern clock, which is thought to date from circa 1680, was sold at Sotheby’s in London in 1988 when it was noted as being the property of Viscount Hereford.

Few London makers are more important than members of the Frodsham family, represented in this sale by a good 18th century black japanned tavern clock by William Frodsham, (1728-1781) of Kingsgate Street, Red Lion Square, another member of the Clockmakers’ Company, which is estimated at £5,000-7,000. The typically painted wooden dial has Roman numerals and gilt painted metal hands, the eight-day single-train movement with passing strike on the hour, while the shaped trunk door is decorated with a crest of an ornate helmet and worded “Seigneur Je Te Prie Garde Ina Vie” (Lord I Beseech Thee Save My Life).

An early George III mahogany table clock by Haley & Son of London, recorded working in before 1774, is estimated at £3,000-4, 000. The clock’s seven-inch brass dial has a Strike/Silent dial to the arch, an eight-day two-train movement with anchor escapement, striking on a bell, contained in a figured mahogany case with inverted bell top and folding brass handle.

Dating from a period similar to the Edward East clock is an equally rare dark olive green glass shaft and globe sealed wine bottle, its squat dumpy blown body with narrow neck and wide flat string ring with a seal to the front marked with its owner’s initials “H.G.”  below a star motif. It was found in Spitalfields in London at some point in its long history and is estimated at £5,000-7,000.