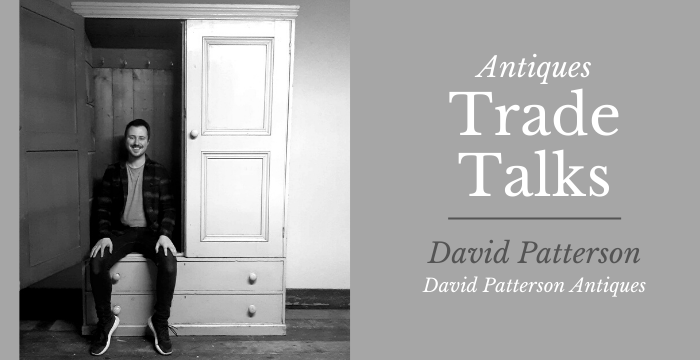 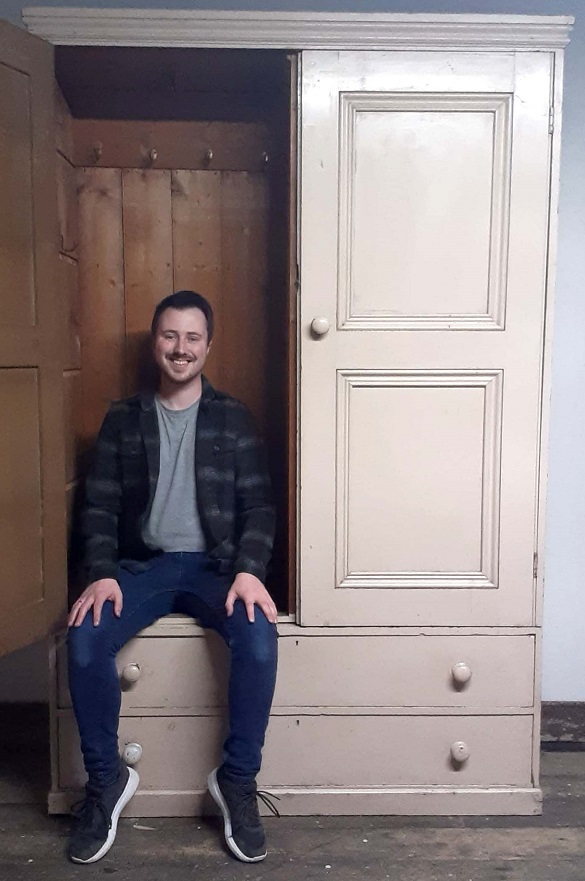 Following in his grandfather’s footsteps as a third generation antiques dealer, David Patterson trades from the historic town of Lurgan in County Amargh. With an eye that’s drawn to pieces with originality, texture and form, he has a particular interest in Irish country furniture.

What is the unique appeal of antiques?

To me, it’s the prospect of having a tangible piece of living history in your home. When we start to understand the story behind an antique – why it was made in such a way, how it was originally used and where it was found – it all breathes life into an otherwise inanimate object. We become a part of their story and get to share our lives with pieces that will ultimately outlive us time and time again. Quite humbling when you think of it.

What areas/items are currently selling well?

I’ve been selling country furniture and wares steadily for several years now. Although it’s the old story, ‘quality tells and quality sells’. Anything that’s highly original and the ‘best’ of its kind will sell. From pine to mahogany, rough earthenware to fine porcelain the same rule applies.

Which are the ones to watch/future sellers?

Brown furniture has been a sleepy market for some time now. Good quality Georgian period pieces are very buyable at present as are longcase clocks. Both are due a major comeback.

What antiques do you have at home/collect and why?

I have a number of pieces in my home that are constantly being sold and traded. It makes for an interesting dynamic although a few things are steadfast.

My collection of spongeware pottery is darted around the house including; plates, bowls, a teapot and mugs. It resonates so deeply with me because when you hold a piece of spongeware you’re handling something that really has survived against the odds. They were the seconds from potteries decorated in haste and sold to the poorer classes during the 19th and early 20th century. Often they exhibit imperfections such as chips or firing flaws although these generally don’t put a collector off. They would have seen regular, even daily, use in the home and reflect a time when this was perhaps the only pottery a family could afford.

I also have a very primitive four-legged ‘creepie’ stool that was found on my great Grandfather’s farm. Remarkably, it has stayed in the family ever since and was saved by my Grandfather when the farm was sold up in 1970. It was put into a loft where it sat until a few years ago when I found it thickly covered in dust and dirt. It’s a large and rare example of its kind and featured in a display I hosted on Irish vernacular seating in the Armagh County Museum. I could have sold it time and time again to collectors, dealers and even a museum but some things you just can’t put a price on.

What do you think will be the antiques of the future?

Probably design led mid-century furniture and furnishings will enjoy even greater popularity in thirty years. Although there’s no reason why 19th, 18th and 17th century pieces should be any less appreciated then.

How is the industry changing and are you optimistic for its future?

I suppose the biggest change has been online trading which has forced the high street antique shop to diversify. It’s no bad thing and has opened up a global market that was otherwise extremely difficult to tap into. Am I optimistic? Yes! Antiques are not finite, in fact day and daily pieces are becoming antique. And in a world where we are more aware than ever of our carbon footprint people are waking up to see just how environmentally friendly antiques are.

Is new technology good for the trade and buyers/collectors?

Most definitely! I was able to sell an Irish linen press while sitting in a hospital waiting room and respond to an inquiry from Australia whilst walking the dog all within the last week! Buyers can browse and inquire at any time from any time zone with such comfort and ease. All the more increasing the chance of a prospective sale. The digital antique shop really is ‘open all hours’.

Tell us some trade secrets – what key questions should buyers ask?

Always ask for a detailed receipt of your purchases. This is so important and yet is so often an afterthought. Not only is this helpful for your own records, for the likes of insurance, it also gives a reassurance and offers the buyer protection should they be sold something fake, married or ‘not as described’. A reputable dealer will never shy from giving a receipt.

Things are slightly different when buying at auction as often ‘your eyes are your guide’. Although if something is described wrongly or in a misleading way in a sales catalogue or online portal you may have grounds for a refund if you’re not satisfied.

Whether buying from a dealer or auction where possible view and handle the piece in person. If you can’t do this ask for detailed photographs of the piece; front, back, top, bottom, inside and underneath! Once again a vendor of any esteem will not have any issue with providing these. Act with caution if there is any hint of reluctance or excuses given as to why they can’t.

You can request what’s called a ‘condition report’ that will outline any repairs, restorations, damages or losses to a piece that will help build a better picture of it in your mind’s eye.

What antiques/artworks would you buy if money were no object?

You’re down to your last 50 quid – what antiques/art would you buy?

I’d be straight out to the nearest auction, buy a few ‘smalls’ and start trading my way up again. Sounds a lot like an episode of Lovejoy! A Windsor chair, some toasting glasses, an earthenware crock and a naïve oil on board would all fall within budget.

Where are your favourite antique hunting destinations and why?

I find the best place is at source, straight from the house, meaning pieces are market fresh. This can come about because someone is downsizing or perhaps from a deceased estate. Either way this is essentially how the antiques market is fed and continues in a cyclical nature.

What are some of the biggest mistakes that buyers make?

I remember hearing an old dealer recount, ‘I’ve never made a mistake buying anything, I’ve just purchased some expensive pieces of experience’. If buying from a reputable source then this shouldn’t be a problem. But if going out on your own to hunt markets and auctions then mistakes inevitably will be made. And there’s nothing wrong with that, what’s important is that we learn from them.

I bought a table ‘blind’ from auction recently. That is, to buy without viewing it neither online or in person! Naturally my fingers got burnt. Yes it was cheap but I didn’t stop to ask myself ‘why is this so cheap?’. The top was most certainly Georgian and Cuban mahogany as described but the frame and legs were not so old and made up of scraps of Edwardian tables! If it sounds to good to be true it probably is.

What do you consider the high point of your career in antiques?

The antiques trade is turbulent to say the least and perhaps that’s all part of its appeal. You could have a Chippendale one day and chipboard the next. But one of my personal highlights was a call I received to a farmhouse being cleared.

It was located in the heart of the County Armagh countryside, comprised of a 19th-century dwelling with a 20th-century house adjoined. Some of the rooms in the old part had been sealed for some eighty years, their very doors wallpapered over.

In one of these rooms I discovered a highly original vernacular armchair of superb sculptural form and presence. The vendor couldn’t quite understand my liking to something so gnarled and rickety but I assured him that it was special. So special in fact that it now resides in the Armagh County Museum. After some further research I managed to trace descendants in New Zealand of the family that originally lived in the house. And so the chair was aptly christened ‘Corrigan’s Armchair’.

Are antiques attracting younger buyers and, if not, how can the industry reach out to them?

My customer demographic is varied but more and more I’m seeing younger buyers (close to my own age of 25) searching for unique pieces for their home. There’s a sense of achievement when you purchase an antique; you’ve hunted for it, researched it and perhaps even restored it yourself. So far flung from buying something flat-packed off the shelf. And just as that Victorian armchair was a talking point when it was first bought brand new, so it is again 140 years later!

What advice would you give to people new to antiques who want to learn more?

Choose a specific field of interest and acquire some good books. Couple that with handling and studying pieces in shops, stately homes and auctions you’ll be well on your way. If your interest is in antique furniture I can highly recommend, The Antique Furniture Trail by V. J. Taylor. This was one of the first books I was given when starting out and remains a faithful companion to this day. It can be bought really inexpensively on eBay and dives straight in with easy to understand explanations and illustrations.