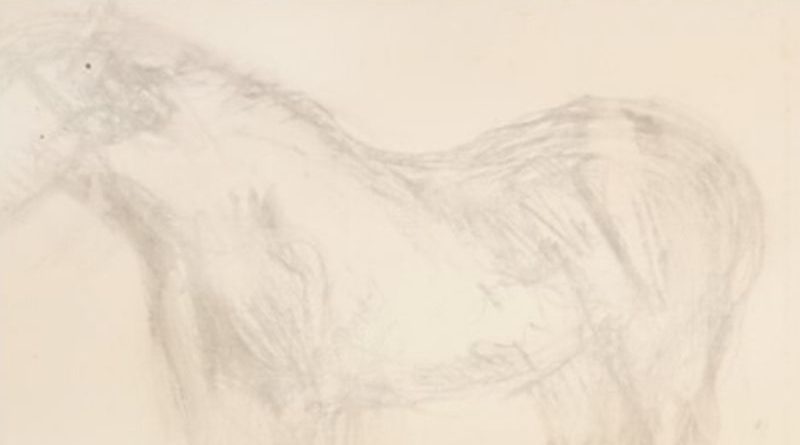 A undiscovered charcoal sketch by Lucian Freud, entitled Sketch of Goldie, is estimated to fetch between £40,000 to £60,000 in a London saleroom next month.

Chiswick Auction has announced the discovery of the new work by the artist, which is the preliminary workings out for a composition that he left incomplete, dating from around 2003. The artwork will be sold in the auction house’s Modern & Post-War British Art Sale on December 3. 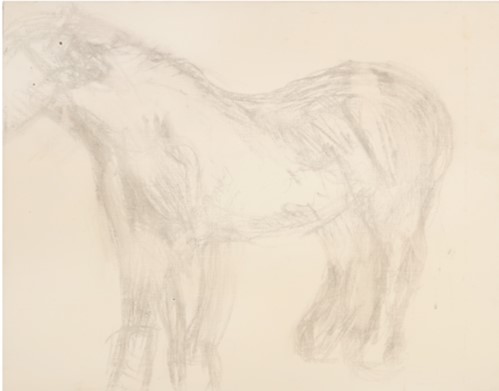 Never before seen in public, the study offers a rare insight into Freud’s practice and his life-time interest in horses. In 2003, Freud embarked on the work at the Wormwood Scrubs Pony Centre in West London, established and run by Sister Mary-Joy Langdon. He had been introduced to the stables by his studio assistant, the renowned artist David Dawson, who had chanced on them while walking his dogs on the Scrubs.

Over the next three years (2003-2006), Freud returned frequently to paint at the Wormwood Scrubs Pony Centre, completing three of his finest oil horse portraits there: Grey Gelding (2003, {Private Collection), Skewbald Mare (2004, Collection of the Duke of Devonshire) and Mare Eating Hay (2006, Private Collection).

Freud embarked on the present canvas depicting a Welsh cob called Goldie immediately after painting Grey Gelding, a grey-white Arab gelding called Releef and before painting the skewbald mare Sioux at the stables in 2004 and 2006.

Initially, Mary-Joy was unaware of Freud’s identity and reputation as an artist, but she was deeply impressed by the painter’s quiet respect and innate understanding of the horses when he visited. She offered him a loose box in which to set up his easel and innocently gave him a book on ‘How to paint horses’!

Freud was fascinated by the stables and his connection with the horses and love of riding won Mary-Joy’s trust. A strong friendship formed between Freud and Mary-Joy and in time he was granted his own set of keys. Over the next three years, the stables became an off-site temporary studio for the artist, where he could combine his love of drawing, painting and riding. It was the shared fascination with horses that drew Sister Mary-Joy and Lucian together.

Describing Mary-Joy’s instinctive way with the animals Freud recalled, “The horse drinks tea with her, I’ve never seen in all my horse-life, such intimacy, such friendship.” Equally as intriguing is Mary-Joy’s recollection of Freud, who she says: “would often ride the horses without wearing a saddle, or a helmet!”  It was a mutual appreciation that led to Mary-Joy being asked to attend Freud’s funeral on horseback.

Having painted the Arab gelding Releef at the stables face on, Freud chose to depict Goldie, the subject of the work to be offered for sale, side-on, and with the head partly truncated.

Mary-Joy recalls Goldie as, “a stunning chestnut with flaxen mane and tale. She was a Welsh cob – a big strong horse”, but Mary-Joy also knew how wilful and stubborn her character was and remembers how surprised she had been that Lucian had selected her to paint. Lucian however, was not to be dissuaded and spent a full week working on the composition, only to finally admit defeat and leave the canvas incomplete and in the care of Mary-Joy, in whose possession it has remained to this day. The result: Sketch of Goldie, is an affectionate, highly gestural work, which expresses both the artist’s confidence in the subject and the horse’s strong character.

Commenting on the discovery of this exciting work, Krassi Kuneva, Head of Sale, Modern & Post-War British Art at Chiswick Auctions, said: “It is rare to see such preliminary workings out of a composition by Lucian Freud. He normally destroyed anything that he deemed unfinished or unworthy. In this case, instead of demolishing it, he left it in Mary-Joy’s hands, providing us with an exciting, intimate view of how he formed his initial ideas on canvas.”

She continued, “The composition of Sketch of Goldie is also very revealing. Freud’s placement of his subject on the canvas is always a distinctive feature of his work. Goldie’s cropped muzzle in this instance is one the canvas’s defining features, giving the work a particular energy. While Freud didn’t see eye to eye with this particular horse and left the work unfinished, the composition was a device he clearly wanted to explore further and the truncated side-on pose became a feature of his subsequent horse portraits that he completed at the Pony Centre – namely the Skewbald Mare of 2004 and Mare Eating Hay of 2006”.

The sale will also include Freud’s original palette, paints and brushes, used in the creation of some of his greatest horse-themed works.

Sketch of Goldie will be offered in Chiswick Auctions’ modern and postwar art sale on December 3.