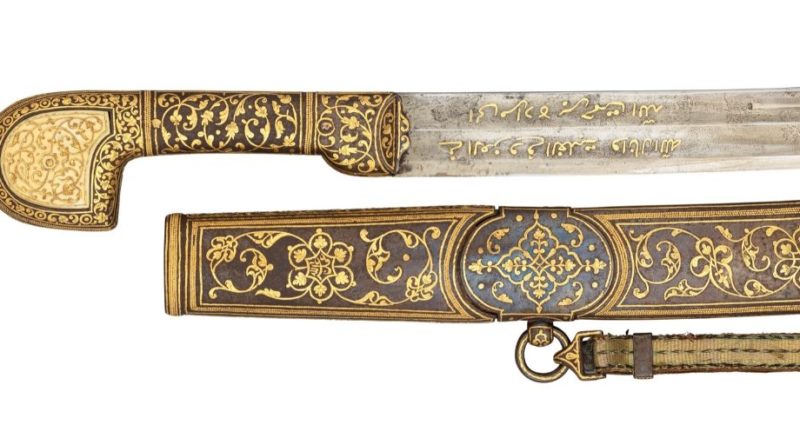 A magnificent Imperial Russian sword lead the auction when it sold for a hammer of £85,000 in Thomas Del Mar’s recent sale of arms and armour in London.

The ornately decorated and carved 19th-century sabre features gold inlay and ivory mounting. It has a curved blade, formed with three fullers encrusted in gold with Arabic couplets on each face. The couplets read “zada dawlat sahib hadha al-sayf wa ‘umrahu / wa qadrahu wa baraka fi ‘iyalihi w’anala maqsadahu“, (“May the fortune and life of the owner of this sword increase / And his stature, and [God] bless his family and grant him his desire.”) and “fi’l-‘fizz wa’l-ghalba wa anala allah / ila muradihi bi-rahmat allah” (“In glory and in conquest, and may God grant / His desire, through God’s mercy“).

Other distinguishing features include the maker’s mark, translated as ‘Work of Abdullah‘ and an ivory panel at the top of the scabbard with the Imperial cypher of Nicholas II of Russia.

The town of Kubachi in Dagestan, a Russian republic to the west of the Caspian sea, has a long history of arms production, the name roughly translating as ‘mail master’.

The inhabitants apparently supplied Tamerlane, the Turco-Mongol Persianate conqueror, with mail and other weapons in the 15th century, though the town is now best known for the deluxe weapons produced there during the second half of the 19th century such as the example of this Imperial Russian sword.

Sword makers were skilled at imitating decoration found elsewhere such as the gold-encrusted Arabic inscriptions frequently encountered on sword blades.