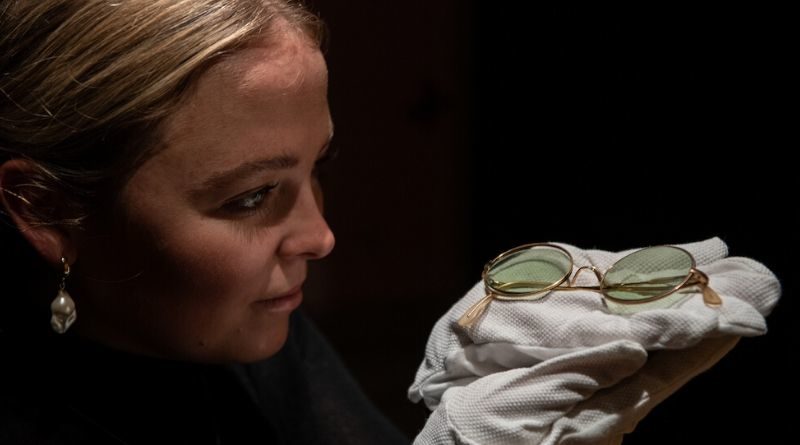 A pair of John Lennon’s sunglasses has sold for over £130,000 at Sotheby’s in London, achieving more than twenty times their lower estimate of £6,000.

The sunglasses, which made over £137,500 in an online auction, were sold by Alan Herring, a chauffeur for Ringo Starr and George Harrison during the late 1960s, who was give the glasses after Lennon left them on the back seat of Starr’s car.

Sotheby’s specialist Dr Gabriel Heaton said, “John Lennon and his signature round sunglasses have become synonymous with one another; it’s almost impossible to think of one without the other. His are the most iconic sunglasses in rock and roll history, and this pair have perfect provenance stretching back fifty years. Half a century on from the height of Beatlemania, items relating to the band remain as popular as ever.”

Alan Herring explained how he came to own the glasses. “In the summer of 1968 I had picked John up with Ringo and George in Ringo’s Mercedes and driven the boys into the office. When John got out of the car I noticed that he’d left these sunglasses on the back seat and one lens and one arm had become disconnected. I asked John if he’d like me to get them fixed for him. He told me not to worry they were just for the look! He said he’d send out for some that fit. I never did get them mended I just kept them as they were as John had left them.”

The glasses were the most valuable of more than 20 Beatles‘ collectibles sold from Herring’s collection at Sotheby’s today for an overall total of £204,250. Further highlights include George Harrison’s necklace, which sold for £10,000, and a ruffle collar shirt worn by Ringo Starr that made £9,375.

Herring added: “The memories I have of this very special time in my life working with The Beatles are far more important to me than the things I kept which are associated with them. For my family’s sake it makes sense for me to say goodbye to my collection now while I can still tell all the stories behind everything. It’s been an emotional journey for me getting to this point, but having kept all these things with me for the last fifty years, I now feel the time is right for me to part with them.”

Elsewhere in The Beatles’ sale, and coming from a separate collection, was The Beatles’ original audition tape, which sold for £62,500. This is a unique recording of the band’s first commercial test for Decca on New Year’s Day 1962. The test was unsuccessful, and Decca will always be known as the record label that turned down The Beatles, however, this tape still played a significant role in the future success of the band. As a favour, Epstein was given this copy of his band in a professional studio, and ultimately played it to George Martin at EMI.