A collection of letters written by the late Princess Diana go under the hammer today in a New York auction house.

The letters reveal details of the Princess’s charitable works, and show how stunned she was when her dresses made $2 million at auction, shortly before her death in 1997.

The letters were written in preparation for the sale and detail her reaction to its success. There is also a signed catalogue from the auction itself. They are expected to make around $20,000 at Swann Auction Galleries. 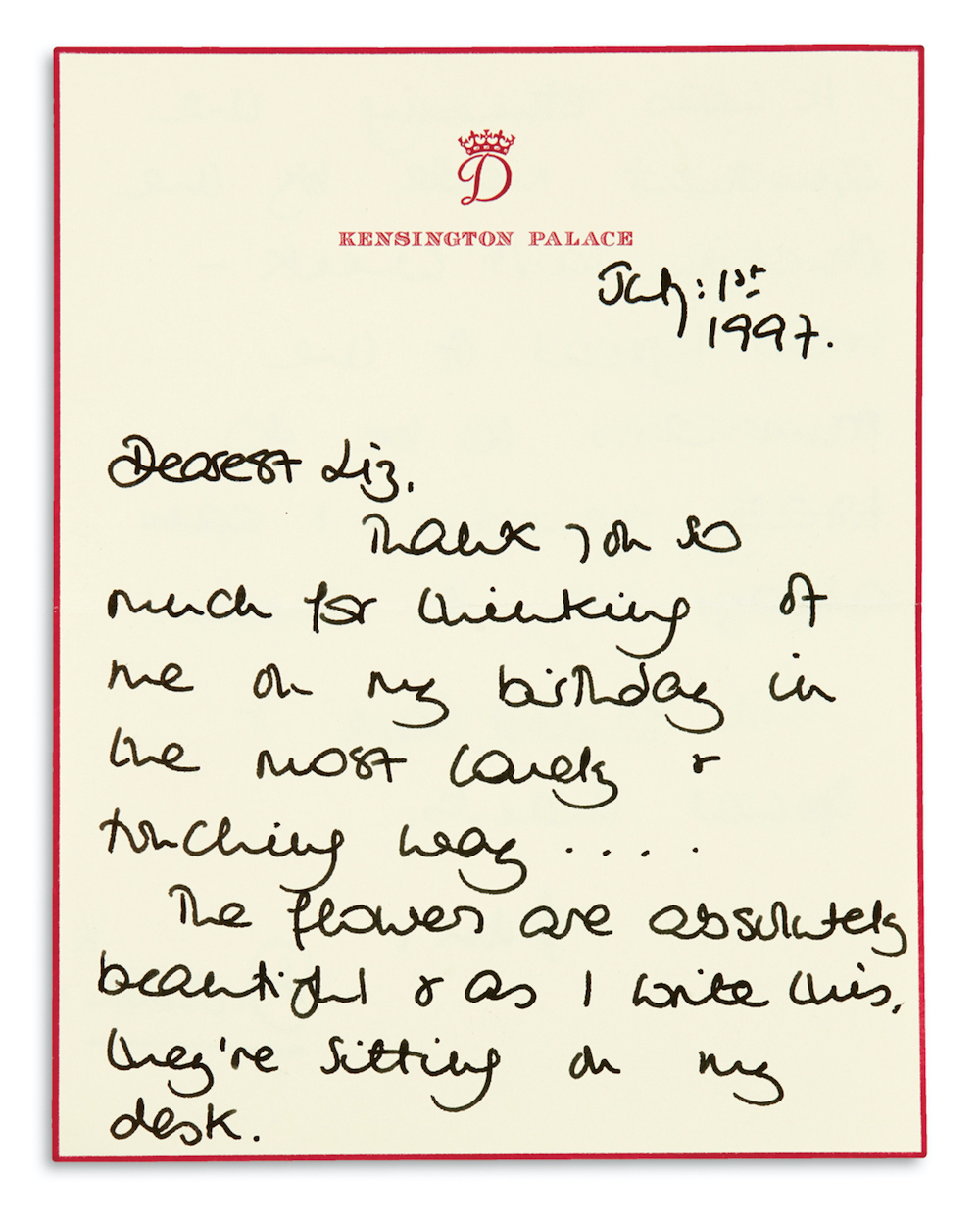 It transpires that it was the then 14-year-old Prince William’s idea for the Princess to sell a selection of her dresses at auction to raise money for children’s and AIDS charities.

The first of the letters, written to her friend, the Harper’s Bazaar editor Liz Tilberis, is dated October 15, 1996.

In it she writes: “I am so thrilled that you’ve invited me to New York for the evening of December 9th [Costume Institute Gala] . . . . It goes without saying how enormously proud I am of you . . . [O]f course, I will be by your side & look forward to seeing you tremendously.”

On 25th February 1997, she continues: “. . . [A] lovely idea of Veronica’s, to host a preview reception in June for the sale of my dresses!
“. . . The news of the auction came out far too early & it’s due to be announced next week from Christies! . . .
“It’s been quite an event sorting out the frocks–memories flooding back & some excellent ones too! . . .”

The idea for the auction clearly caught the public – and media’s – attention, as Diana goes on to write another letter to Tilberis on 3rd April 1997: “. . . Christie’s have been tremendously organised on the cancer / AIDS front & there seem to be articles appearing, here, there & everywhere! . . .”

The auction itself, titled Dresses from the Collection of Diana, Princess of Wales, took place in New York on June 25, 1997 and a signed catalogue, numbered 58/250, forms part of the offering at Swann Galleries with an individual estimate of $5,000 to $7,500.

Diana’s delight at the success of the auction is evident in the letter she wrote on her birthday, July 1, two months before her death. In it she thanks Tilberis for the birthday gift of flowers, expressing amazement at the amount of money made at the auction:

“Thank you so much for thinking of me on my birthday . . . .
“It was stunning the amount made by the auction last week. How typical of the Americans to be so totally generous. I can always rely on them!”

The idea of bringing to auction a selection of Princess Diana’s evening wear was suggested by her son, Prince William. She resolved to convert her dresses into funds to aid the Royal Marsden Hospital Cancer Fund and the AIDS Crisis Trust. To many, the sale of the dresses represented the Princess’s passage into a new phase of life; tragically, she died two months later.

Other Princess Diana related lots will also be on offer in Swann Galleries’ Fine Books & Manuscripts auction on February 20, including a much earlier letter to Tilberis, dating to October 31, 1991, relating to her appearance on the cover of Vogue magazine (estimate $1,500 to $2,000), a Christmas card with photograph of Princes William and Harry with their cousins, the Princesses Beatrice and Eugenie (estimate $400 to $600) and a signed and inscribed menu for the benefit dinner held by the British Deaf Association on July 18, 1990 (estimate $400 to $600).

Liz Tilberis herself did not live long after the death of her friend, succumbing to ovarian cancer at the age of 51 in April 1999.