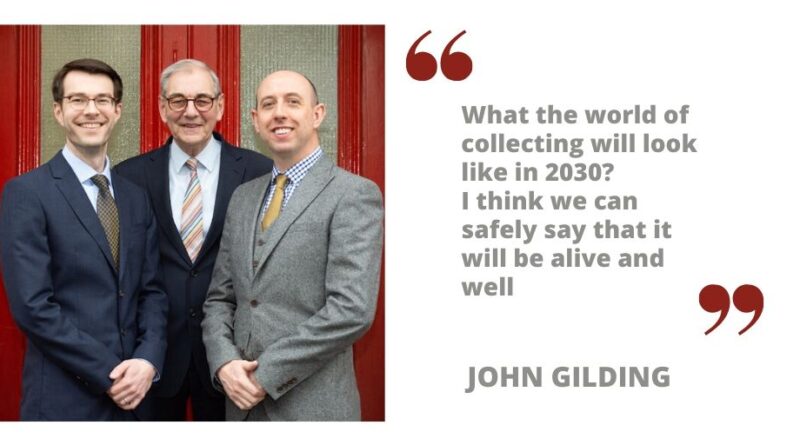 John Gilding, who set up Leicestershire-based auctioneers Gildings in 1980, takes a look at what has changed in the collecting world over four eventful decades.

In the collecting business fashion really is the most powerful instrument. It comes and goes – and recently there has been a lot of going.

It’s an amazing cycle of watching and learning to try to forecast what will be next. For example, things like Doulton figures and Toby Jugs were massive at one stage and would sell for hundreds each, but now you put ten of them in a box to sell. Mostly!

On the other side of the coin, we have teak 1960s Scandinavian furniture. In the late 1980s and 1990s this was out of fashion to the point that it would be consigned to the skip or even used to make rabbit hutches for the Gilding children! However, these days a good piece of teak can make more than Georgian oak.

The market in antique furniture can only be described as distressing and unfortunately people who got attached to the idea of it making money have had to have a rethink.

However, this massive drop is more of an essential decline than one influenced by changing fashions. While it’s true that young people don’t necessarily want ‘old, dark stuff,’ in their homes, even if they did, they wouldn’t have room for it. Houses are getting smaller but more expensive, so those looking to buy a home today must be on a very keen budget. Add to that people from the older generation downsizing and there is nowhere to put bulky antique furniture.

Nowadays, the market in Victorian landscapes and seascapes is hard work and they need to be very good to achieve a decent price. Having said that, I think seascapes will always have a market here in the landlocked Midlands!

These days at an average auction, in addition to the 100 people in the room (pre-COVID of course), about a dozen on the phone and around 60 popping in with a written bid for any particular lot, we will routinely have around 500 people registered to bid online.

This has opened up a whole new world of possibilities for collectors who are now able to request condition reports and bid for items from anywhere in the world. In January this year, we sold an African tribal spear for £18,500 to a Paris-based buyer, against a collector bidding via a WhatsApp voice call from Thailand.

With the internet making covetable items more accessible than ever to those who can afford them, we have also seen a huge shift in how collectors operate. Increasingly, we are seeing people collect in more and more niche areas, particularly in the area of toys and memorabilia, where the following are increasingly popular:

These days, the market for jewellery is also strong as more and more private buyers become savvy with their spending on big-ticket pieces. In general, there is a swing towards things that people can put in their pockets and take home that day, rather than items that require a van and two men.

However, the market is always vulnerable, and supply and demand is complicated and can work in a very niche way. For example, paperweights decorated with frogs made by John Ditchfield were very sought after by collectors, but they began to lose value when he met demand by producing more. Now they are on their way up again. Minor changes like that are at work all the time and they work on a larger scale too; for example, as more people realise they can buy jewellery cheaper at auction, prices are rising.

One of our most memorable occasions at Gildings was when we hosted Tim Wonnacott’s first ever episode of Bargain Hunt in 2003. Tim was an absolute star with a fantastic ability to walk into any saleroom and instantly identify the star lots. Working on the show was a fantastic experience for auction houses like ours and, of course, it exposed the world of collecting to a whole new audience, who quickly became hooked.

What next for collecting?

The auctioneering business has weathered many economic storms over the decades, and of course the global pandemic has made what seemed like fairly grave concerns over Brexit fade into insignificance, although this still a significant factor on the horizon.

For auctioneers and collectors alike, nothing will ever match the excitement of being in the room on sale day, but the ability to hold live online auctions means that Covid-19 is not the catastrophe for the industry that it would have been a mere 15 years ago. Like other auction houses across the UK, we are reacting to the current situation with emailed condition reports, and virtual phone consultations, while also looking into contact-free delivery options for clients.

From a collecting point of view, although people may be feeling more cautious about spending, many now have more time on their hands to pursue their interest even if it’s with a focus on research for now. Also, those who previously haven’t bid online may now be motivated to do so. Not only that, we will see an influx of consignments from those who have used the lockdown time to have a clear out of collections.

While it’s impossible to predict what the world of collecting will look like in 2030, I think we can safely say that it will be alive and well, both online and in salesrooms all over the country, just as it always has been. After all, it is in our collectors’ nature to feed our interests with material items that reflect our own personalities.

Before establishing Gildings, John Gilding ran the Fine Art department of Shakespeare, McTurk and Graham in Leicester. Now semi-retired, with sons Mark and Will Gilding at the helm, John still takes an active role in the running of running this dynamic and highly reputable auction house.