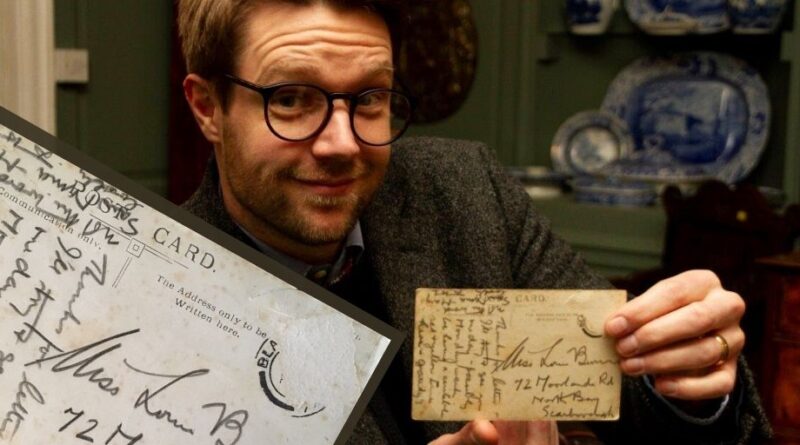 A postcard written by the author DH Lawrence that was discovered under a bed when the consignor was downsizing has sold for ten times its estimate to hammer at £3,000 in a recent Derbyshire sale.

The century-old postcard penned by the writer of such classics as The Rainbow, Sons and Lovers, and Lady Chatterley’s Lover was written to Louie Burrows shortly before they were engaged to be married in 1910. Lawrence described Burrows as a woman who warmed his heart like a ‘sunny day’.

The postcard, which was inherited by Louie’s great niece Ros Connolly, had a guide price of £300-£500 when it went under the hammer at Hansons Auctioneers – but was eventually contested to £3,000. It sold to a private UK buyer.

Mrs Connolly, who keeps her postcard collection under the bed, came across it when she was downsizing. In 2019, a D H Lawrence postcard, found by chance as it was about to be thrown in a skip at Bilsthorpe tip, near Newark, sold for £1,500 at Hansons.

Jim Spencer, works on paper specialist at Hansons, said, “What a result! I knew it would do well as we had intense interest ahead of the sale, but to sell for 10 times its low estimate is incredible. D H Lawrence’s literary impact is very special.”

The postcard from 1910 reawakened a love story from more than a century ago. Mr Spencer said, “The couple never married but Louie was engaged to D H Lawrence from 1910-12. He must have broken her heart when he left her but she always remembered him with fondness. The character Ursula in his book The Rainbow is based on their relationship and her former home, Church Cottage in Cossall, near Ilkeston, is also referenced.” 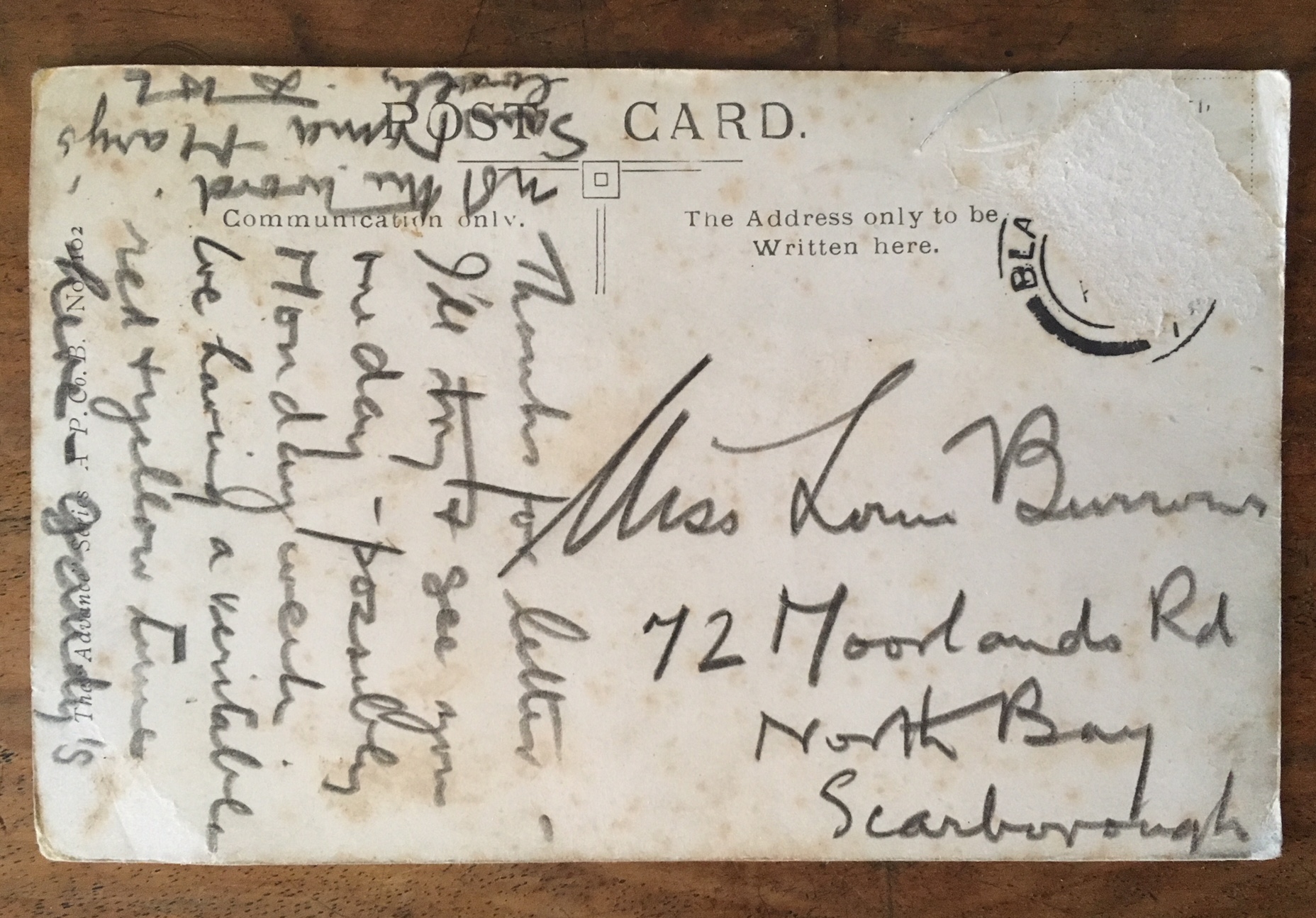 Mrs Connolly, 70, from Cheltenham Gloucestershire, said: “I was given the postcard by my grandma Constance Slee, Louie’s sister, when I was about five years old in 1955. I started collecting postcards when I was four or five as I thought they were pretty. At the time, I didn’t realise the importance of Aunt Louie’s postcard.

“I’ve always kept my postcard collection in my bedroom, often under the bed. I came across it again when I was downsizing and decided to sell it as tribute to my great aunt. Aunt Louie and my uncle Fred Heath, who she married in later life, were lovely people.”

The couple’s romance has been documented both academically and in book form. In 1910 Lawrence wrote to his mother, who was ill in Leicester Hospital, ‘I have been to Leicester today and have met a girl who has always been warm to me – like a sunny happy day – and I’ve asked her to marry me: in the train quite unpremeditated between Rothley and Quorn’.

The postcard, addressed to ‘Miss Louie Burrows, 72 Moorlands Rd, North Bay, Scarborough’, has no stamp or visible date but reads: ‘Thank you for letter – I’ll try to see you one day – possibly Monday week. We having a veritable red & yellow time here – gaudy’s not the word. Saw Nina – Mary’s lovely. DHL’.

“Lawrence was writing (the postcard) from the boarding house of Catherine Swarbrick at 77 Talbot Road, Blackpool, where he was staying with his friend George Neville. The ‘red & yellow time’ in the card is partly explained by that memoir, in which he describes how two other guests had dressing gowns of rose and gold colour, and how Lawrence and Neville called them ‘Rosie’ and ‘Old Gold’ and successfully evaded them.

“The mistakes in the card – ‘We having‘ and the scrawled ‘lovely‘ – suggest the unsettled nature of life there. In the card, Lawrence says ‘saw Nina‘, which we know took place on Thursday August 11, 1910, so the card must have been written c.11-12 August 1910. The postmark was certainly ‘Blackpool’. The Stewarts were at 44 Nelson Street, Barrow. They had three children, the Nina whom Lawrence mentions, a daughter Mary, almost certainly the Mary mentioned in the car, and a younger son.”

Louisa, known as Louie, Burrows (1888-1962) met Lawrence at Ilkeston’s Pupil-Teacher Centre and the Day Training College of University College, Nottingham. Friendship blossomed into romance and they became engaged in 1910. However, in 1912 Lawrence caused heartbreak when he eloped with Freida Weekley. But Louie never forgot Lawrence and visited his grave at Vence, France, twice.

She enjoyed a successful teaching career and became a headmistress in Leicestershire. In 1940 she married Fred Heath and, according to Mrs Connolly, they enjoyed a very happy marriage. Louie retired in 1941 and died in 1962 at the age of 74.

Lawrence (1885-1930) was born in Eastwood, Notts. He rose to become one of England’s most influential literary figures. His impact is still felt today and some of his books have been adapted for film and television.