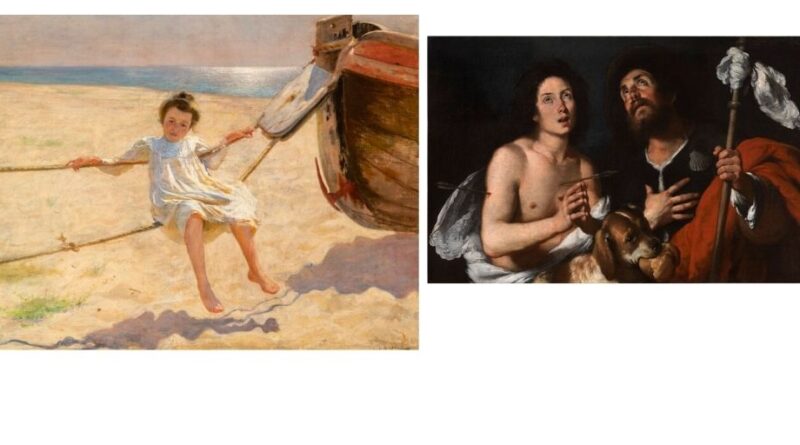 London Art Week Digital continues online this summer at www.londonartweek.co.uk, attracting art lovers and collectors not quite ready to visit exhibitions in person (although most London Art Week participants are now open).

Hundreds of works of art offered by more than 50 of the world’s best art galleries can still be viewed online. Works date from antiquity to the present day, and include many themed exhibitions such as British women artists, Caravaggism, medieval faces, works from The Studiolo, portraits, and flora and fauna from the 16th century to the present.

Talks and broadcasts that took place live between 2-10 July are now being added to the website, along with essays and articles on the News page. “Of all the programs we were part of that had to be amended, London Art Week has done it the best and with the most proactive intelligence”, said Flo Horswell of Sladmore Gallery, one of the new participants  in London Art Week’s specially-devised digital platform, which opened on 2 July with a preview of its unique Viewing Rooms.

The Viewing Rooms, arranged thematically, featured works for sale from all 52 participants in London Art Week shown side by side and many dealers reported meeting new clients as a direct consequence. Dealers’ individual gallery pages, which continue to remain active for the next couple of months on the London Art Week website, were created to display up to 25 works of art per dealer, with supporting material including video presentations and written material.

Many dealers put together special exhibitions for LAW Digital, including Colnaghi. “Over 50% of the works in The Golden Age of Spanish Modern Art have been sold,” said Victoria Golembiovskaya, CEO, “and others are reserved for institutions.” Jorge Coll, CEO, added: “We are proud this bold project has been received in such a positive way, during a difficult moment of the pandemic. Among works sold was Julia Wearing a Mantilla c. 1914 by Barcelona artist Ramon Casas, which sold for 190,000 euros, and another was The Swing, a summer beach scene of a young girl by Laureano Barrau.

Philip Mould & Company sold Duncan Grant’s Standing Nude from 1932 to a private UK collector after Bonhams achieved a world record for Roger Fry’s portrait of EM Forster. The painting was on display in the London Art Week viewing rooms and in the Pall Mall gallery. Philip Mould & Company was showcasing a number of Bloomsbury Group works for this year’s London Art Week; the sale of the Duncan Grant was agreed days after the LAW preview.

Karen Taylor Fine Art had an excellent response to her special exhibition of British Women Artists 1780-1890, for which she produced a catalogue. Karen has had quite a lot of interest from museums, and is very pleased, adding, “And it is not over yet! The effort was worth it. The Viewing Rooms and website looked very slick, and it was a great idea to focus on including museums and creative content on the website.”

Lowell Libson, of Lowell Libson & Jonny Yarker Ltd, reported the sale of “two drawings in our online exhibition to an American collector, previously unknown to us, on the basis of a visit to the LAW platform, while a US museum made a commitment to purchase a previously seen picture, having been reminded of it on the digital platforms.”

Stephen Ongpin Fine Art sold a work by Giovanni Battista Tiepolo from the Viewing Rooms to a new client in Italy, priced in excess of 40,000 euros. Their themed exhibition for London Art Week entitled Drawn to Nature: Flora and Fauna from the 16th Century to the Present, has also been successful.

Harry Gready of Benappi Fine Art, said: “We were very pleased with the results of London Art Week Digital. We were not expecting to have many people visiting the gallery, for obvious reasons, and the LAW platform enabled us to bypass this inability to show our works in person. Our clients liked the fact that they could see some of our works through the viewing rooms which they had not seen before, as well as discover other dealer’s work covering the same era. We had some good enquiries and many of those were from collectors we had not previously been in touch with.”

Leopold Deliss from Charles Beddington Fine Art was pleased to sell a work on paper by Francesco Zerilli (1793-1837) of Messina dating from 1827: “We were contacted by the buyer via the London Art Week website and were able to arrange a sale as a result of it. The buyer was completely unknown to us and it was good to see that the website attracted new clients.”

At Sam Fogg, where their exhibition was Medieval Faces, Matthew Reeves commented: “LAW Digital is new territory for all of us, but we embraced it and were pleased with the response. We sold over half of the objects in our exhibition, including our German late 15th-century sandstone carving of the Head of John the Baptist, which was the highlight of the show.”

Andreas Pampoulides, of Lullo-Pampoulides, thought the website looked wonderful. He commented: “It is a very nice, slick, platform and I loved the diversity of objects. The quality on offer was very high and the themes explored in some of the individual exhibitor’s sites were really interesting.”

The numerous live talks organised by London Art Week which took place online were very well attended, averaging around 150 viewers, including a popular discussion around ‘Making Women Artists Visible’.  Daily videos were broadcast with The National Gallery, along with live lunchtime Instagram discussions between dealers – these, as well as videos and news articles can still be enjoyed on the LAW website, which continues to have new material uploaded regularly to the end of July, and will remain available through September.

The majority of London Art Week’s participating dealers with galleries – not just in London but also in Munich, Paris, Rome, New York and elsewhere – are also now open to visitors, and many have presented their London Art Week exhibitions in situ in their gallery spaces, although making an appointment is recommended.