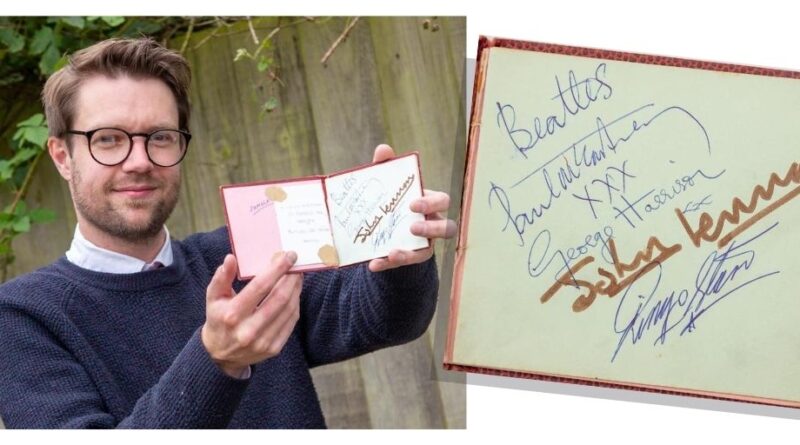 A scrap of paper bearing autographs from The Beatles in the 1960s sold for thousands of pounds at auction – and gave its owner a welcome windfall just before her birthday.

In 1963, then aged just 12, Pamela Timson was hanging out by the backstage door at the Granada Theatre in Mansfield, Notts, when a mystery Beatle stepped outside.

She was among a huddle of young music fans who thrust their autograph books into the air. Pamela’s was returned to her with a full set of Beatles signatures: Paul McCartney, George Harrison, John Lennon and Ringo Starr.

Her autograph book, which also contained other 60s musical legends including Adam Faith, Roy Orbison and The Walker Brothers, sold at Hansons Auctioneers recently for a hammer price of £3,400.

It was a timely windfall for Pamela, a retired building society customer advisor and grandmother from Worksop, Notts, as she is celebrated her 70th birthday. She said: “I’m pleased someone will now get to enjoy them, just as I have.”

Recalling the day over fifty years ago, she said: “I was standing outside the stage door at the Granada on March 26, 1963, with friends, hoping against hope that someone would pop outside for a cigarette break.

“It happened that night when one of The Beatles appeared. Sadly, I hadn’t worked out who was who at that time and it all happened so quickly. They’d only just released Please Please Me and were yet to have a number one hit. And though one of the Beatles took the book away to be signed, someone else brought it back.

“Thank you, whichever Beatle you were, for taking my book and getting it signed. Only later as their success grew did I realise I was the owner of something very special.

“Now as I mark my 70th birthday and look at my autograph book, I realise how lucky I was to be a teenager at that time.

Charles Hanson, owner of Hansons Auctioneers, said: “I’m delighted a moment of kindness from a mystery member of the Fab Four has led to a successful result for Pamela. Music memorabilia is a booming sector with keen collectors worldwide.”