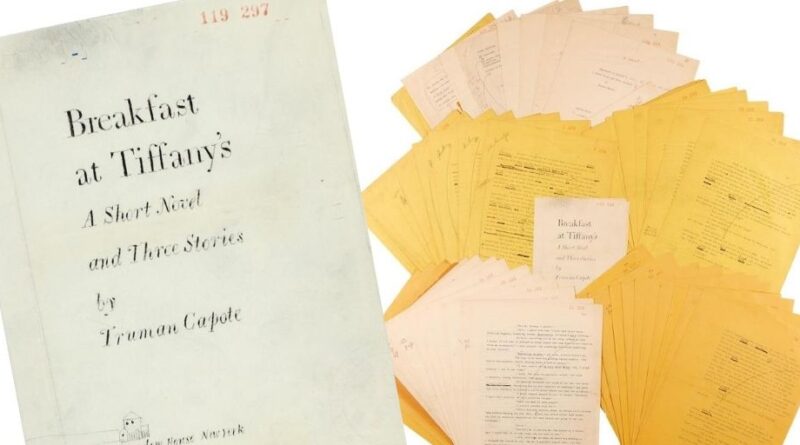 The finalBreakfast at Tiffany’s typescript, covered in hundreds of the author Truman Capote’s handwritten edits, has sold to an anonymous buyer for £377,000 at Sotheby’s London, more than double the pre-sale estimate of £120,000-180,000.

The hugely successful novella introduced Capote’s most enduring fictional creation, Holly Golightly, for the very first time. Until this very final draft, Holly was known throughout as Connie Gustafson. At this final stage every reference to Connie is crossed out and replaced – a move that arguably transformed the future fortunes of the novel. The charmingly contrarian free spirit – wearing a little black dress – went on to be immortalised by Audrey Hepburn in the much-loved 1961 film of the same name.

Dr Gabriel Heaton, Sotheby’s Specialist in Books and Manuscripts explained: “The character of Holly Golightly is of course the heart of Breakfast at Tiffany’s, and the most striking change made by Capote in this draft relates to her. Whilst Connie Gustafson may be more plausible as a child bride from Tulip, Texas, she would never have had the impact on the world that she has had as Holly Golightly. Undoubtedly one of the great names of modern comedy, it is as magnificently implausible as its owner and connects to her character in a number of ways: “Golightly” reflects the lightness with which she treats the world, her lack of attachment to place, and perhaps hints at promiscuity; whilst “Holly” will prickle if you get too close.”

Capote wrote of the character: “The main reason I wrote about Holly, outside of the fact that I liked her so much, was that she was such a symbol of all these girls who come to New York and spin in the sun for a moment like May flies and then disappear. I wanted to rescue one girl from that anonymity and preserve her for prosperity.”

Few, if any, literary manuscripts by Truman Capote of equal importance to the typescript remain in private hands. His archive is divided between the New York Public Library and the Library of Congress (the latter of which includes another draft of Breakfast at Tiffany’s).

This final working typescript provides extensive and detailed insight into the working method of the writer, showing exactly the obsession over detail that both frustrated Capote, but were also key to his success as a writer.

Many of the revisions in this typescript modulate the vocabulary – “mad” to “vexed”, “touch” to stroke” – or excise unnecessary words. Capote himself later reflected that Breakfast at Tiffany’s marked a turning point in his style. All these revision were most likely made from Capote’s bed, his favourite place to write.

This typescript was submitted to Random House, who published all of Capote’s major works, in May 1958, just before Capote departed for a sojourn in Greece, and comes with the original envelope from the publishers addressed to (“Mr Truman Capote | 70 Willow Street | Brooklyn 1, New York”).