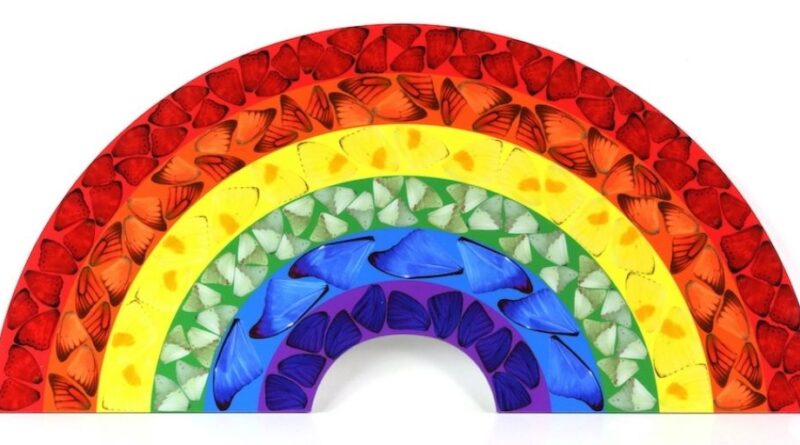 Works by world-renowned artists including Damien Hirst, Laurence Stephen Lowry and Louis Icart are to go under the hammer in a Surrey auction house next month.

Earlier this year, British artist Hirst launched limited-edition rainbow prints to support NHS Charities Together, and organisation The Felix Project, a London-based organisation which redistributes surplus food from the food industry to frontline charities, as the country faced the Covid-19 pandemic.

Two prints were made by Hirst, entitled Butterfly Heart and Butterfly Rainbow. Both were digitally made of bands of photographed butterfly wings.

The print going on sale at Ewbank’s is the small rainbow design, it is still in its original cardboard box, and has a pre-sale guide price of between £300 and £500. Initially sold through Heni Editions, the print is edition number 811/4150, is signed verso and measures 24cm by 50cm.

Lowry is one of the UK’s most collected contemporary artist and is most famous for his scenes of life in the industrial parts of north-west England, using his distinctive stylised “matchstick men” figures in urban landscapes.

A signed drypoint etching by Icart, entitled Parasol, has a guide price of between £300 and £500. It is framed and glazed and has an embossed blindstamp from Le Graveur Modernes Paris.

Another Icart etching this time in colour, entitled Basket of Apples, also has an estimate of between £300 and £500. Dated 1924, it is framed and glazed and is signed lower right.

A signed ink drawing by British artist Louis Wain, (1860 – 1939) called ‘I Didn’t Steal Thee Chicken No!’ is on sale with a guide price of between £300 and £500. Wain was a popular commercial illustrator and is best-known for his drawings of anthropomorphised cats and kittens with large eyes.

He is also said to have suffered from schizophrenia, which can be seen in his works according to some psychiatrists. His fascination with cats developed when he began drawing his pet cat cat, Peter, to cheer his wife, Emily, when she became terminally ill with breast cancer.

Around the time of First World War, his work became less popular and he became more impoverished. This additional stress took a toll on Wain’s mental health and, in June 1924, he was committed to the pauper ward of the Springfield Mental Hospital, in Tooting, London.

A public appeal a year after his admission to Springfield, backed by high-profile admirers of his work including HG Wells, and a personal intervention by Prime Minister Stanley Baldwin, saw him moved. He was first transferred to Bethlem Royal Hospital, or ‘Bedlam’ as it was colloquially known, in Southwark, London, and eventually onto Napsbury Hospital, Hertfordshire, where he stayed until his death in 1939.

Fans of street artist Banksy will be delighted by two lots going on sale which play homage to the reclusive figure’s work.

A limited-edition print, Police Kids, in the style of Banksy, which is stamped Banksy Copy and numbered 73/500 verso, is on sale with a guide price of between £300 and £500; and an exhibition poster from Banksy vs Bristol Museum, 2009, has an estimate of between £150 and £250.

The sale is taking place on October 8.