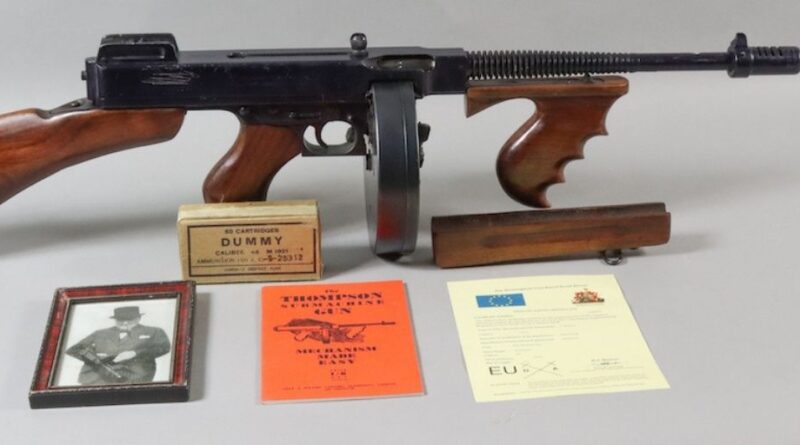 The military collection of a Kent carpenter who lived for his hobby of military history and collecting weapons, particularly bayonets from two world wars, is to sell at The Canterbury Auction Galleries.

Keith Chisman worked at Bowaters Paper Mill in Sittingbourne and was a member of the Military Historical Society. Keen to pass on his interest to another generation, he was a Sargeant Major Instructor in the Army Cadet Force for many years and even ran a rifle range for his colleagues at Bowaters.

So great was his passion, he converted the loft at his home into a mini museum and he would spend many hours up there immersed in his collection, researching and arranging the objects that he treasured so much.

Keith died earlier this year at the age of 90 and his family, keen to pass on the objects to other like-minded collectors to appreciate as much as he did, have decided the collection should be sold. Such is its breadth, it will be offered in 86 lots in a three-day sale from October 3-5.

“This is a significant group of militaria,” managing director and specialist Dave Park said. “It comprises everything from sten guns and rifles – all deactivated, of course – to battle dress, helmets and webbing, but Keith’s fascination was with bayonets which dominate the collection.” Deactivated weapons do not need a licence to purchase.

A rare World War One British Small Arms (BSA) .303 Calibre Lewis light machine gun dated 1914, mounted on an anti-aircraft tripod is the most valuable single piece in the sale, estimated at £5,000-7,000, while a good .45 Calibre Thompson sub-machine gun, to be sold with a photograph of Winston Churchill carrying a similar weapon, is estimated at £2,000-3,000.

Rifles and carbines are by such makers as BSA, Lee Enfield, Lithgow, Remington among others and include examples with cutaways for instructional and training purposes. Estimates range from £300-700.

The 27 lots of bayonets carry more affordable estimates. Among the earliest a good American bayonet, the bright steel blade stamped 1898 that has retained its original steel scabbard with unusual metal belt hook, will be sold with a good early 20th century bayonet by Elsner Schwyz, in its steel scabbard (estimate £80-120) and a good 1907 .303 Enfield sword bayonet in original its leather scabbard, to be sold with four others (£100-150).

A 1918 American bayonet, with blackened steel blade, pommel and cross guard, is fitted with an unusual locking mechanism to its original canvas and leather scabbard and will be offered with four other .303 sword bayonets each dated 1907 (£100-150).

Among steel helmets, a Second World War British Paper Mills Fire Service steel helmet harks back to Keith’s time at Bowaters. It will be offered with another painted “Fire”, a warden’s helmet, and seven Zuckerman protective helmets for civilian use (£150-200).

Property from other owners in the militaria section of the sale includes some good Japanese pieces. A suit of armour from the Edo period, the armour (nerikawa nimai-do gusoku) made from lacquered leather and comprising a zunari kabuto (helmet) with five-lame neck guard and matching hanbo (face guard), lacquered iron splints and chain mail. Surmounting the helmet is a katabami (wooden crest) displaying the Sakai samurai clan emblem, and the whole is laced in matching green silk, complete with storage box and stand. (estimate £2,000-3,000).

A late Edo kusari-katabira (armoured chain mail jacket) of the type worn by samurai under their daily clothing as protection when travelling is estimated at £250-350.

Among Japanese edged weapons is a signed jumonji yari (cross-shaped spear) by Banshu Tegarayama Ujishige, circa 1770, with visible suguha hamon (straight blade), the 16ins long tang with one peg hole (£800-1,200).